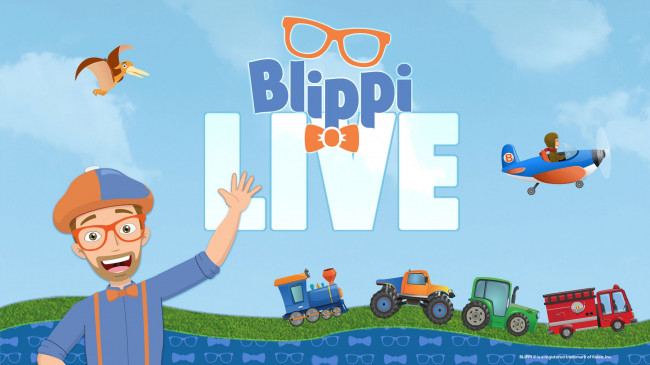 It was announced today that children’s YouTube sensation Blippi will bring his first-ever tour across North America to the F.M. Kirby Center in Wilkes-Barre on Wednesday, Feb. 26 at 6 p.m.

“Blippi Live” is set to bring the vivacious, energetic, and educational children’s character from the screen to the stage for an all-ages extravaganza of fun, dancing, singing, and meeting amazing new friends onstage.

Blippi’s first national tour will bring the fun and antics of his beloved adventures to the stage to provide an interactive, family-friendly show unlike anything else out there. Blippi’s appeal lies in his wonder, in the way he looks at the world – “Wow, look at that! It’s a plane, a tractor, a fire truck, and a train!” – so expect plenty of fun and discoveries for the whole family.

He’s taught millions of kids colors, letters, how to count, and much more. In just a few years since his inception, Blippi has become one of the most popular YouTubers worldwide, with over 200 million views per month, six million YouTube subscribers, and billions of followers across 139 countries.

Fans can visit blippilive.com now for tour dates, ticket information, and one-of-a-kind meet and greet packages. It should be noted, though, that in a recent interview with Billboard, creator Stevin John admitted that he will not be portraying the character of Blippi on the road:

“I won’t be on the road, but I am obviously extremely involved with the whole process,” he notes. “Blippi is as a character and I’m the creative force behind it, but since YouTube is a monster and all of these platforms are really crazy, I can’t go on the road for many weeks or months at a time.”

Instead John will hire an actor who he’ll train to appreciate and eventually master the mannerisms of the boisterous-yet-eternally-young leading man. It’s a shrewd, and long-thought out move — in order for Blippi to grow and truly scale into an empire, John recognizes that he’s got to separate the persona from the character. It’s a long term play to create a global brand, but John said he’s deliberately not skipping steps in building Blippi and is preparing to work with whoever is cast to play Blippi in the live show.

“My advice to them will be to try and envision what it was like to be a child and remember how your excitement and imagination we’re at such an elevated level,” John said. “I really try and remember what it’s like to be a child. I had a great childhood and I want my audience to have a great childhood and get excited about life and to love learning.”

Round Room is a live entertainment company that specializes in the production and promotion of live family entertainment, arena shows, concert tours, theatrical performances, and touring exhibitions. In 2018, Round Room was acquired by global independent studio Entertainment One, industry leaders across the family and brand space. Over the last 10 years and now under eOne, the senior management of Round Room have served as producers of tours like “Bodies: The Exhibition,” “Rock of Ages,” “Fuerza Bruta, “An Evening with Oprah Winfrey,” “An Evening with Al Pacino,” “Jurassic World: The Exhibition” and, most recently, “The Rolling Stones Exhibitionism,” all while producing and promoting some of the biggest kids tours to date, including “Yo Gabba Gabba Live,” “PJ Masks Live,” and “Baby Shark Live.”