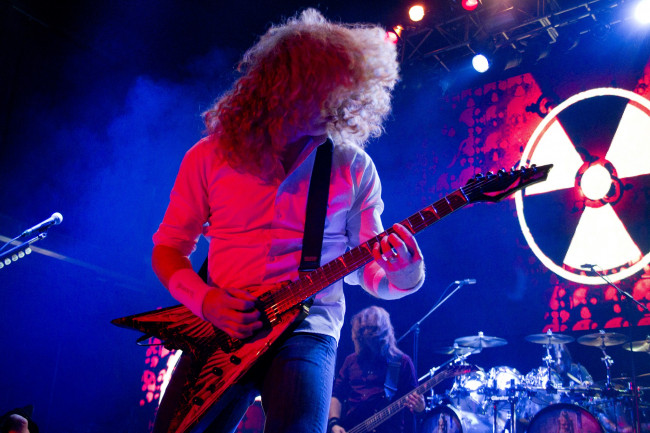 Following the enormous success of their 2021 co-headlining U.S. tour, heavy metal titans Megadeth and Lamb of God have announced the second U.S. run of their aptly named Metal Tour of the Year with special guests Trivium and In Flames.

The tour was originally announced and planned for 2020 but was halted by the pandemic. Fans waited patiently for touring to return and, in the summer of 2021, were granted their wish. The Metal Tour of the Year was one of the first national amphitheater tours to hit the road in 2021 and saw Megadeth and Lamb of God hit 29 cities across North America with Trivium and Hatebreed, who stepped in to replace In Flames after they couldn’t join the tour due to travel restrictions. The trek was met with enormous acclaim, truly living up to its name and playing to a whopping 172,000 metal fans in the process.

Speaking on the success of the initial leg and his excitement in hitting the road again this year, Megadeth frontman Dave Mustaine said, “The Metal Tour of The Year is exactly what it sounds like – a night of some of the best heavy metal bands in the world, live and loud. Anyone who came to a show last year knows what I mean, only this one’s going be even better. Do not miss out.”

Produced by Live Nation, the second leg will kick off on April 9 in Las Vegas and hit a further 21 cities before wrapping up at the PPL Center (701 Hamilton St, Allentown) on Sunday, May 15, starting at 6 p.m.

Tickets and VIP packages for all artists go on sale to the general public this Friday, Jan. 14 at metaltouroftheyear.com.

“The Metal Tour of the Year was one of the strongest, most incredible metal tours in ages – its namesake nothing but accurate. How do you follow that up? By doing it again – even bigger, even better, and have it play everywhere it didn’t on the first leg. MTOTYII – let’s do this,” Trivium vocalist/guitarist Matthew Kiichi Heafy commented.

With In Flames singer Anders Fridén added, “We are excited to finally be able to join our dear friends in Megadeth, Lamb of God, and Trivium on this year’s Metal Tour of the Year! We can’t wait to be back on the road in America and to reunite with you all. Don’t miss this tour – it’s a juggernaut.”

This tour will be part of Live Nation’s Live Stubs initiative, which provides digital, collectible NFT ticket stubs to ticket holders. Reimagining ticket stubs as digital collectible NFTs, Live Nation’s Live Stubs will mirror the unique section, row, and seat of each ticket purchased, allowing fans to collect ticket stubs once again, but this time with more capabilities. Live Stubs will automatically be included with tickets on select Live Nation shows in North America. Fans will be able to view, share, gift, trade, and resell their live stubs on livenation.com. These are collector items and will not replace the digital tickets needed to physically enter the show.

It was over 30 years ago that Mustaine founded Megadeth, in the process pioneering the sound that would become known the world over as thrash metal. And from the very beginning, the band proved to be the most lethal and audacious unit on the heavy music scene, pushing thrash to the limits of musical ferocity and instrumental virtuosity on early efforts like their 1985 debut, “Killing Is My Business… and Business Is Good!” and 1986’s seminal “Peace Sells… But Who’s Buying?”

Megadeth has taken their place as one of metal’s most influential and respected acts – not to mention among its most successful. They have gone on to sell more than 38 million albums worldwide, earning numerous accolades, including a 2017 Grammy Award for Best Metal Performance for the title track “Dystopia,” 12 Grammy nominations, and scoring five consecutive platinum albums. With sheer determination and a relentless recording and touring schedule, Megadeth worked their way up from headlining clubs to headlining arenas, festivals, and stadiums, cementing a legacy that continues to grow and spread throughout the world. They are slated to release their 16th studio album, “The Sick, the Dying… and the Dead,” later this year.

Lamb of God propelled heavy metal into the new millennium two decades ago with the prophetically titled “New American Gospel.” They followed with 2003’s “As the Palaces Burn,” which made the Rolling Stone list of the “Top 100 Greatest Metal Albums of All Time.” “Ashes of the Wake,” released in 2004, was the first Lamb of God album to be certified gold by the RIAA, as was 2006’s “Sacrament,” which also made a Top 10 Billboard 200 chart debut. In 2009, they released “Wrath,” their first with Josh Wilbur as producer, and earned the No. 1 album spot on Billboard’s Hard Rock, Rock, and Tastemaker charts, with a No. 2 position on the Billboard 200.

Those No. 1 positions were repeated with 2012’s “Resolution,” which swung effortlessly between thrash, traditional metal, and sludgy doom, with flashes of crust punk swagger and bravado. Lamb of God’s last album, “VII: Sturm und Drang,” made its debut on the Billboard 200 at No. 3 in 2015 and finished at No. 2 on the world charts, reaching the Top 5 in five countries and six addition Top 15 positions. The single “512” was nominated for a Grammy Award for Best Metal Performance, the band’s fifth nomination.

In 2020, they released their critically acclaimed self-titled opus. With new drummer Art Cruz, Lamb of God is re-energized and unrelenting, ready to lay claim to the metal throne.

Trivium’s 10th album, “In the Court of the Dragon,” arrived in 2021. The band and record have been praised by and featured in mainstream outlets like the New York Times, NPR, Forbes, Billboard, TechCrunch, and Kotaku, as well as Guitar World, Revolver, Alternative Press, and more. They released the now-canonical album “Ascendancy” in 2005. It was recognized as Kerrang’s Album of the Year, achieved a gold certification in the U.K., and eclipsed sales of 500,000 worldwide. Metal Hammer placed it in the Top 15 of “The 100 Greatest Metal Albums of the 21st Century.” It ignited a string of six consecutive Top 25 debuts on the Billboard Top 200 and five straight Top 3 debuts on the Top Hard Rock Albums Chart, culminating on the 2017 benchmark “The Sin and the Sentence.”

That album elevated the group’s total stream tally past a quarter-of-a-billion. Additionally, the single “Betrayer” received a Grammy Award nomination for Best Metal Performance. Unanimous acclaim followed from Decibel, Loudwire, Ultimate Guitar, MetalSucks, and Metal Hammer, who dubbed them, “quite simply one of the best bands in modern metal.” 2020 brought “What the Dead Men Say.” The album was produced by Trivium and Josh Wilbur and debuted at No. 35 on the Billboard Top 200, at No. 2 on the Top Current Albums Chart, and at No. 3 on both the Hard Rock Albums chart and Top Rock Albums chart. They have performed alongside Metallica, Black Sabbath, Iron Maiden, and many others and graced the main stages of Download, Bloodstock, Knotfest, and beyond.

In Flames is less of a band and more of a musical institution in the world of heavy music. Since helping create Sweden’s legendary “Gothenburg sound” three decades ago to their current status as melodic metal monoliths, the act has constantly eschewed trends in order to forge their own musical path. Having been prevented from joining the initial leg of the Metal Tour of the Year due to travel restrictions, they are primed and ready to bring their inimitable brand of metal to the stage on this upcoming run in support of the 20th anniversary re-release of their landmark album “Clayman” and their latest release, 2019’s “I, the Mask.”

See NEPA Scene’s review and photos of Megadeth’s concert at this venue when it was called the Sands Bethlehem Event Center back in 2016 here and see more photos of Megadeth from the 2016 Rock’N Derby in New York here. 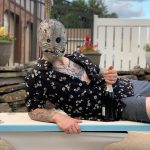