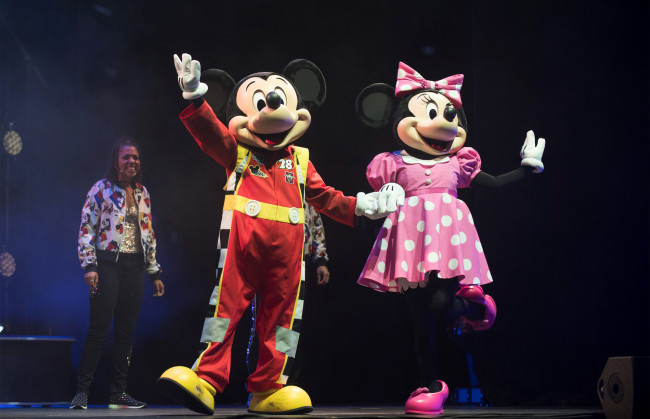 Young Disney and Marvel fans can dress up and join the party when “Disney Junior Live on Tour: Costume Palooza” comes to the F.M. Kirby Center in Wilkes-Barre on Wednesday, Oct. 26.

In “Costume Palooza,” Mickey, Minnie, and their pals are getting ready to throw a huge costume party but mysterious weather keeps interrupting the fun. Can Team Spidey help save the Costume Palooza?

The show is presented by the creators of the two-time Pollstar-nominated “Disney Junior Dance Party on Tour,” which sold over 350,000 tickets. The live show is written and directed by Amy Tinkham and produced by Terrapin Station Entertainment CEO Jonathan Shank.

“We are going to blow the minds of Disney Junior fans with all the on-stage fun and new songs we have in store for them,” Shank said.

“We are so excited to be working with the Disney Junior team again on this premier preschool production bringing back all the beloved Disney characters, and now, for the first time, Marvel’s ‘Spidey and His Amazing Friends.’”

“It is great to be able to bring the Disney Junior characters back on the road again, bigger and better, with incredible acrobatics, songs, and dances. We know that families won’t want to miss the chance to see Marvel’s ‘Spidey and His Amazing Friends’ perform, as well as Mickey, Minnie, and their favorite Disney Junior pals,” added Jennifer Rogers Doyle, senior vice president of networks franchise management, integrated planning, and licensing at Disney Media and Entertainment Distribution.

Part of Disney Media and Entertainment Distribution’s networks, Disney Junior is a global multi-platform brand with content created by Disney Branded Television expressly geared towards preschoolers aged 2-7 and their families. Available as a daily programming block on the Disney Channel and a 24-hour channel available in 77 million homes in the U.S, it has been the No. 1 preschool channel on TV for 36 straight quarters among kids 2-5, every quarter since it has launched.

Home to some of the most cherished programming and franchises for preschoolers, including Emmy Award-winning “Elena of Avalor,” Peabody Award-winning “Doc McStuffins,” and new hit series “Spidey and His Amazing Friends” and “Mickey Mouse Funhouse,” Disney Junior reflects the emotional connection generations of consumers have to Disney storytelling and Disney characters, both classic and contemporary. It invites parents and guardians to join their child in the Disney experience of magical, musical, and heartfelt stories and characters while incorporating specific learning and development themes designed for young children.

Marvel Entertainment, LLC, a wholly-owned subsidiary of The Walt Disney Company, is one of the world’s most prominent character-based entertainment companies, built on a proven library of more than 8,000 characters featured in a variety of media for over 80 years. Marvel utilizes its character franchises in entertainment, licensing, publishing, games, and digital media.

Founded by industry veteran Jonathan Shank in 2020, Terrapin Station Entertainment, a division of Sony Music Entertainment, is an artist management and production company dedicated to helping musicians and brands capitalize on their core audience and shine in the cultural mainstream. With expertise in management, family entertainment, and brand experiences, the Terrapin team strives to ensure that clients achieve their goals.