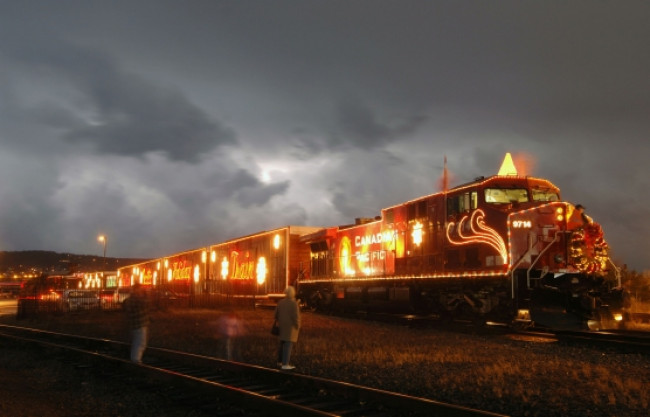 The Steamtown National Historic Site will partner with the Canadian Pacific Railway to host the company’s 2014 Holiday Train on its journey to stock food shelves and pantries across the United States and Canada.

The Holiday Train will visit Northeastern Pennsylvania on Thanksgiving Day, Thursday, Nov. 27 from 5:15 p.m.-5:45 p.m.; visitors are strongly encouraged to arrive at least 15-30 minutes early. The train will depart Scranton for Binghamton, New York on the former Lackawanna Railroad’s mainline and is expecting to cross the historic Tunkhannock Viaduct between 6:30 p.m.-6:45 p.m. Normally closed on Thanksgiving Day, the park will be open to visitation only from noon-6:30 p.m.

The Canadian Pacific Railway created the Holiday Train to raise awareness for the need to restock food shelves in the local communities served by the railroad. Bring non-perishable food items or cash donations in support of those in need – all donations raised here stay with the food pantry in our community. Items like infant formula, canned meats, and spaghetti sauce are in particular demand for the many that turn to food banks each month.

Since 1999, the event has raised more than $7.4 million and over 3 million pounds of food for local food banks in the U.S. and Canada. In 2013, the event at the Steamtown NHS (150 S. Washington Ave., Scranton) helped raise more than 2,500 pounds of food and collected nearly $2,000 in cash donations, in addition to a CPR corporate contribution of $1,000 for the United Neighborhood Centers of Northeast Pennsylvania.

Thousands of people gather trackside at depots, railroad crossings, and other unusual venues along CPR’s route to enjoy the brightly decorated train that will light up the winter night at Steamtown NHS. The train is decorated with hundreds of thousands of technology-leading LED Christmas lights, and for the 15th year, CPR’s elves have updated the lighting that adorns the sides of the train that is part of the Holiday Train program.

The musicians, who ride in vintage private cars at the end of the 14-car train, climb aboard a boxcar in the middle of the train that opens to reveal a stage where they will perform a live holiday concert, inviting visitors to sing along.