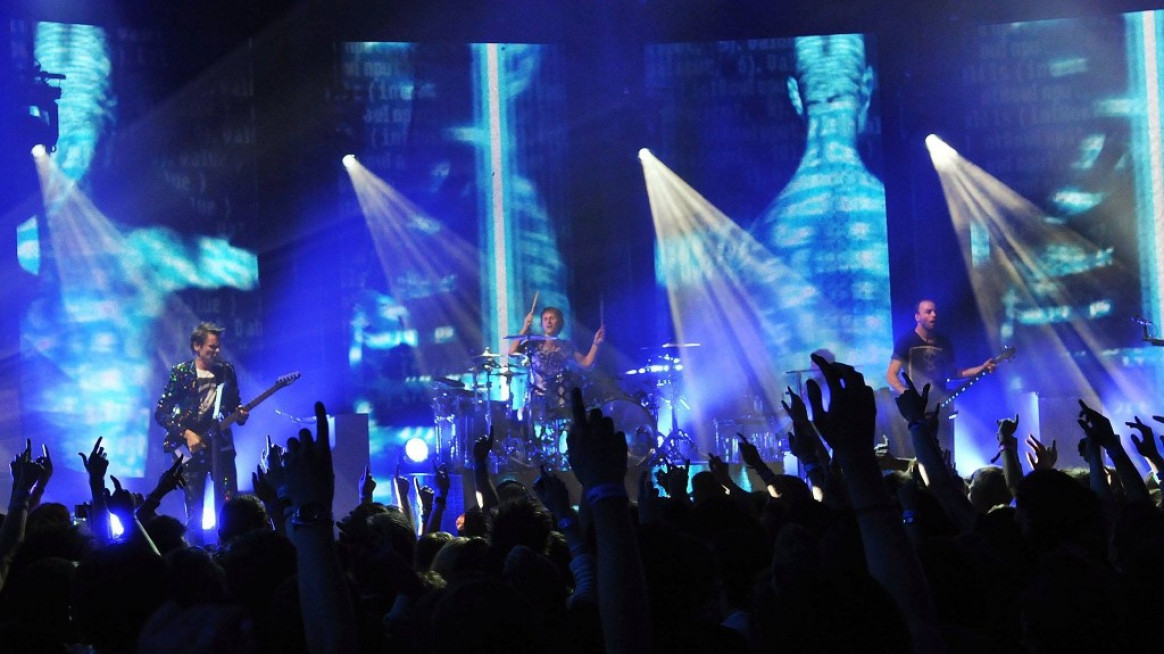 I’ve been to plenty of concerts, certainly ones with much more menacing crowds. But not even two minutes after Muse began playing, I was afraid I wasn’t going to make it out of this one alive.

The band opened with one of their newest singles, the chunky riff-rocker “Psycho” and, appropriately enough, the crowd went crazy. Webster Hall in New York City was acting the role of asylum for the loonies on Friday, May 8 and, with a capacity of 1,500 people, can only hold about 1/10th of the crowd that would normally attend a Muse show. This means the venue was, at the very least, not only filled to capacity, but the people filling it felt very appreciative to be there and were ready to show it. So when the opening to “Psycho” began, the appreciation was shown… by every one of those enthusiastic fans jumping up and down in unison.

As previously stated, I’ve been to plenty of concerts, certainly ones where there was a lot of jumping involved. I’ve also stood on plenty of hardwood floors, which is what we were standing on at Webster Hall, but I never experienced one bending and buckling like this one was. I imagine it’s what Jesus would feel like if he tried to walk across a wave pool. If this floor gave out, though, I don’t think any of us would be rising three days later. Thankfully, no tragedy that would be quickly trending on Twitter ensued. I suspect I have to thank the lower powers, being strong floor supports, for that rather than any water-walking higher ones.

It’s not like Muse didn’t try to warn us about the level of intensity they were bringing that night. The intro music that played before they took the stage was “Clear the Lane,” a B-side from Rage Against the Machine featuring powerful riffs, innovative guitar, and a message about music being a tool for change delivered with a whole lot of energy. These were the major characteristics of their performance throughout the rest of the night.

Muse is preparing for the release of their seventh studio album, “Drones,” on June 9. The band is known for their riff rock mixed with epic melodies, often compared to Radiohead or Queen combined with the aforementioned Rage, but they strayed a bit from that sound with their previous album, “The 2nd Law.” One might call it a dub-mis-step. They have vowed that “Drones” will be a return to their traditional rock style and started the show by providing ample evidence to back that up with their two newest singles, “Psycho” and “Dead Inside.” The main set ended with a third new song, “Reapers,” showing off lead singer/guitarist Matt Bellamy’s vocal range, including lots of falsetto along with finger-tapping guitar prowess reminiscent of 1980s Van Halen. Chris Wolstenholme’s great mix of skill and taste in his bass lines, too often overlooked, really shine here. Lyrically, all three tunes contain themes of war and control, which certainly match the imagery of the album title and music-for-change characteristic.

The rest of the night was mostly filled with songs sure to please even casual Muse fans, like “Starlight,” “Supermassive Black Hole,” “Hysteria,” “Uprising,” and the unavoidable-on-the-radio hit “Madness.” More diehard fans noted the fortune of hearing two rarer songs performed this night, “The Groove” and “Apocalypse Please.” The former had not been played in the U.S. since 2004, while the latter hadn’t been performed anywhere since 2008. Another highlight included an extra four minutes added to the end of “Stockholm Syndrome,” featuring chunky riffs with nods to Nirvana, Rage Against the Machine (surprise), and their own B-side, “Execution Commentary.” Drummer Dom Howard seemed like he had a lot of fun letting loose here.

There were many extended guitar solos, which culminated with Bellamy’s guitar being thrown into his amp at the end of the main set. Bellamy is far from helpless without his guitar, though, as he sat behind a piano for a few of the songs, including “New Born,” leaving no doubt of his classical music training. The great balance of the familiar with the surprises, delivered with such skill and precision, kept the audience captive with the most persistent energy in a crowd I’ve ever bore witness to.

The show ended with the epic “Knights of Cydonia,” which repeats the lines, “No one’s going to take me alive,” and “You and I must fight to survive,” which brought my mind back to the brief fear for my mortality I had at the start of the show. Now, at the end of the show, having survived Muse, their intense heralding of “Drones” and the messages it brings, I realize their intention was not to kill us, but to make us stronger.

Matt Mang has been an active participant in the NEPA music and pop culture scenes for over 20 years. When he's not selling funny books at Comics on the Green, he's either watching a bad movie or imposing his bass lines on others.