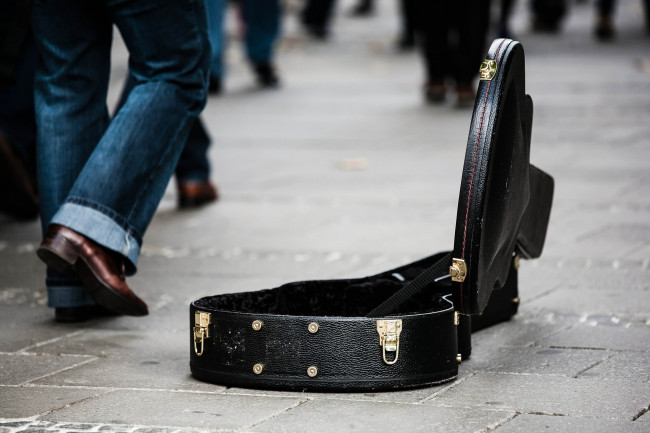 For pretty much all of the 1990s, I played with one band. One band. That was it. When the band wasn’t playing (and we played a lot), we were rehearsing. When we weren’t doing either of those, we were making a new record. We made a new one approximately every 18 months. Between albums, we released a whole bunch of small releases – live things, acoustic EPs, etc., just to keep the interest up in what we were doing.

Once an album cycle was over, we started the next one. We did this independently without a record deal… for years. And, to the best of our ability, we tried to keep that ethic going once we did have a deal. (Side note: That proved to be pretty damn challenging post-deal.)

Ours was a pretty typical scenario for a band around that time. The object of worship was the CD. Or even a few cassettes and vinyl. Those little circles of information were your lifeblood… and your salvation. Your chip on the table.

Cut to 2016. Things have definitely changed – quite a bit. CDs barely sell on an independent level. Vinyl has some appeal, but I would think, on the ground floor, it would be a break-even proposition at best. There are download sales but, as we all know, if you want the music for free, it ain’t too hard to find.

Most, I’d dare say almost all, of my musician friends don’t play with one band anymore. They play with several. That includes me. Off the top of my head here, I just thought of 13 formats that I play in (various bands, duo formations, solo, etc.). ‘Tis the way of things now.

Musicians no longer worship that little round piece of plastic. Their new object of worship is square. And much bigger. It’s called a calendar.

It’s no longer the music business. It’s the musician business. We have shifted from a retail-based business to a service one, and the more services you can offer, the better.

Yeah, these guys spend a lot of time praying at the altar of their calendars, just hoping for a bountiful harvest this year. It’s bad mojo to turn down a gig, unless you are playing somewhere else.

It’s an army of mercenaries all struggling to fill those little numbered squares on the page. There isn’t much “we” vs. “they” – only “us.”

(Generally speaking, I find the camaraderie between musicians to be way better than it was 20 years ago.)

In today’s ecosystem, adaptability is more important than size. As a rule, the guy who can adapt to many styles and situations is going to work more than the dude with the big PA and light show and one good band. Speed and stealth over size.

If you can’t adapt and change, you’ll spend a lot of time at home. But the good news is that it’s never too late to teach an old dog a few new tricks.

Let me use myself as a personal example. Like I said, in the 1990s I played in one band as a songwriter/guitarist. When that died down, I opened a studio and started producing again. That keeps me busy to this day. Also, I didn’t do a single gig where I was the lead singer until I was in my mid 30s… in the 2000s. Now that scenario is 95 percent of the shows I play.

In the studio over the same time, I worked with a jam band, an indie folk artist, a contemporary Christian artist, and a full-on rock band.

Cut to the next three weeks of this year and I have a show in New York City, an opera house, an arts center, a blues festival, and a whole bunch of pizza places. On the studio side, a blues band, an indie rock solo artist, and a handful of solo artists spread across the country that I work with via e-mail.

In the two samplings three years apart, none of the gigs are with the same people, stage or studio. In the 1990s, at least for me, they all would have been the same. Things have changed. And I don’t think it’s just me.

So here comes the opinion portion of our column: Is this good or bad? I’d say both. Players develop more varied skills out of necessity. You learn the vernacular of a more varied group of players… because you have to. What a modern country guy likes is not what an indie folk artist likes. You learn the value systems of both, and all of that seeps back into your own playing and writing.

Innovation is found at the crossroads, at the spot where the chocolate falls in the peanut butter. Necessity is the mother of invention. Good stuff.

On the bad side, there is nothing like a group of guys that live with each other every day and can read each other’s minds. It’s tougher to make that scenario work for a long period of time. Of course, there are success stories. There are some great bands out there that have been at it for a decade or more. It’s more challenging than ever to keep that afloat, though. More often than not, a “band” is now a group of mercenaries coming together for a specified number of shows until they go back to their respective calendars. Not that there’s anything wrong with that – it’s just more common now than it used to be.

I’m pretty OK with this landscape as it stands. However, the road between surviving and thriving is miles long. As it is with all of America, most people can find a way to survive. Somehow. But thriving is another matter entirely.

In the book “The Long Tail,” author Chris Anderson talks a lot about the music business. His mantra is that the future is about selling “less of more.” More products, with less sales of each. For an individual, that means more skills spread out over the landscape instead of one specialization.

The company man is dying, or so it seems. Enter the era of the jack of all trades. And people are adjusting well enough to that, in the music business and in just about everything else. But is all of this “more” in the form of ingenuity and diversification going to lead to an overall “better?”

To quote Woody Allen, “The food was terrible. And such small portions!” Ironic.

The future remains to be seen. Stay tuned.

YEAH, YEAH, YEAH, ALI: RSVP etiquette – 5 things NOT to do when you’re invited to an event