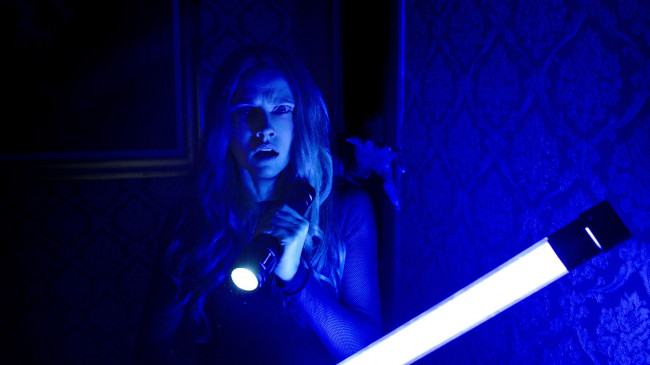 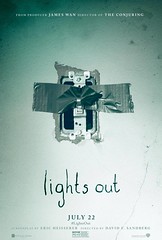 Those who follow my work know how smitten I am with a good horror flick. Lately, my favorite horror films have been indie, dark horse darlings like “It Follows” or “The Babadook,” with mainstream work like “The Conjuring” sprinkled in every now and then.

“Lights Out” adds another name to the recent surge of quality indie horror with an innovative idea, cool monster design, and no bullshit storyline.

The inspiration for this comes from an online short of the same name released in 2013. The short was basically the opening few minutes of this film, and what an excellent opening sequence it is. It showcases the monster, introduces the rules, and establishes a tone for the rest of the runtime.

The short’s director, David F. Sandburg, is at the helm for the feature-length film version as well. His love and passion for the concept is clearly felt throughout this. He’s a great example of why production houses like Blumhouse should take chances on creative people’s passion projects. If you give them the proper outlet and the right resources, they can make something that shines.

The story here focuses on a family torn apart by their mother’s – in this case literal – demons. Rebecca, the family’s eldest daughter who is played by Teresa Palmer, is dragged back into the situation she tried to leave behind years before after her younger half-brother Martin, played by Gabriel Bateman, starts exhibiting strange behaviors in school. This pushes her back into the teeth of her mother’s (played by Maria Bella) apparent mental illness, with the help of her on-again, off-again boyfriend Bret, played by Alexander DiPersia.

The cast is solid for what they need to do here. None of these performances are spectacular in their own right, but I was impressed most by Bateman, who shines in his role. The kid seemed genuinely spooked. Plus, being a child who was afraid of the dark like I was, I sympathize with his distaste for dark, spooky closets and poorly-lit hallways.

This film has many redeeming qualities aside from the small cast and straightforward story as well.

The monster design here is great, in my opinion. The creature is relegated to darkness and banished in the light, cloaking the female figure in shadows for nearly the entire film. It’s a spooky outline to see coming up out of the shadows towards you. At times, all you can see of it is a silhouette and two beady white specks for eyes. It’s a really unsettling image.

The film uses that disturbing imagery in the right way. Instead of resorting to the easy jump scares, the film builds genuine tension and some creepy moments through the use of light and shadows. It really is something unique and distinct to this particular film.

The small cast is the perfect fit for a film like this. The closely connected family dynamic raises the stakes and provides a real, concrete reason to keep pushing for answers. Most bad horror movies leave you questioning why someone would stick around in a situation where a ghost or demon was trying to do them harm. Here, it makes sense.

The film is beautifully simplistic as well. The plot is straightforward; you understand the character motivations, and the mythos of the monster is explored effectively. The film reveals just enough about the monster to keep things interesting and even had some cool scenes with a black light that expanded on the creature’s powers. The origin story is just enough to enlighten you on what the monster is, but just vague enough to maintain a sense of dread and mystery.

Let me be clear, however – “Lights Out” is by no means as good as the likes of “It Follows” or “The Babadook,” but it’s an entertaining ride. The film is good for what it is – an interesting concept that got fleshed out into a feature film on a relatively shoestring budget. Sandberg made the most of his story and got the best possible bang for Blumhouse’s buck.