From a press release: The most triumphant sports drama franchise in history returns to select theaters nationwide for a one-night-only exclusive engagement on Thursday, Nov. 11 with “Rocky vs. Drago: The Ultimate Director’s Cut.” After more than 35 years, director, writer, and star Sylvester Stallone masterfully reshapes “Rocky IV,” delivering 40 minutes of never-before-seen footage. […] 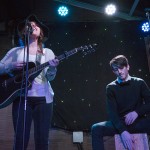