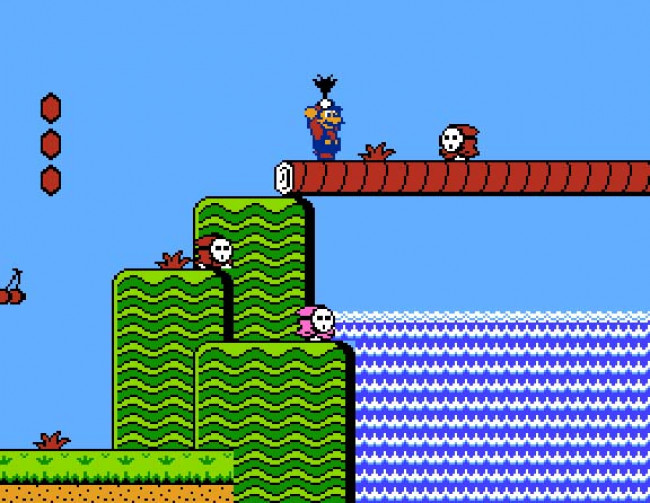 I find that I am often connected in some way to the games that don’t get enough notoriety in comparison to their more famous kin. I think this is, in part, because of the games I had growing up, as well as my tendency to never believe in the hype or lack thereof behind a game; I’d simply rather experience it for myself and draw my own conclusions.

This is why when a must-have game came out when I was a kid, I often ignored it, either because I knew my parents couldn’t afford it or I would most likely end up loving another game that flew under the radar, so to speak. I did not know the initial story behind today’s game here on Turn to Channel 3 as a kid, but knowing it now has only given me a better sense of why I loved it to begin with.

Stepping up to the plate today, in the shadow of its world-renowned follow-up, I give you “Super Mario Bros. 2” on the original Nintendo Entertainment System, or “Doki Doki Panic: The Mario Edition,” if you’re a cheeky gaming nerd like me.

While perhaps not as iconic as the original or “Super Mario Bros. 3” music, there are some simple, yet infectious tunes you’ll be humming along as you play here, many of which still elicit those profound childhood memories. With these came sound effects that were pretty memorable as well, for as limited as they were.

We were on the cusp of a Super Mario explosion, but were merely teased with the soundtrack and sound effect capabilities that were to come. Still, seemingly every gamer who grew up with this title remembers the first time they heard that boss music, had Birdo shoot an egg at them, or plowed through enemies with a Starman.

I feel the first thing people notice about “Super Mario Bros. 2” are the bosses of various shapes, sizes, and detail, all of which are a precursor to the Koopa Kids that would inhabit “Super Mario Bros. 3.” As impressive as these were, with Wart in his only “Super Mario Bros.” catalog appearance as the high point, the levels and enemies within are truly where the graphics shine. The sheer arsenal of enemies in this game is above and beyond what we saw in Mario’s big debut in 1985, with levels of desert and snow we had not seen before either.

The characters you had were also so well-made, further enhancing that aspect of change from the original “Super Mario Bros.”

As the story goes, the actual “Super Mario Bros. 2” created in Japan was tested as too difficult for us here in the West, and thus we got this title, a rebranded Japanese game called “Yume Kōjō: Doki Doki Panic” as our “Super Mario Bros. 2,” and the original would later appear on “Super Mario All-Stars” on the Super Nintendo as “The Lost Levels.” I’m sure I can speak for many of us when I say that I’m glad we got this “Super Mario Bros. 2” instead just for the use of Princess Toadstool and Toad along with Mario and Luigi. It was a nice touch to add some subtle character strengths and weaknesses, as each player would have their favorite, from the ultra popular levitation skills of Princess Toadstool to the tried and true use of everyone’s favorite Italian plumber.

This was, and still is, an easy game to pick up and play, as it is all about picking things up and throwing them at enemies, and while that may seem simple enough, things like digging and dodging faster and, thus, more annoying enemies as you make your way through Mario’s crazy dream amp up the difficulty when necessary.

Relatively inexpensive and a vital part of the “Super Mario Bros.” canon of titles, anyone who enjoys collecting for the NES needs this title in their stash despite the lack of fanfare for it in comparison to the “golden child” of the series, “Super Mario Bros. 3.” “Super Mario Bros. 2” doesn’t get the recognition it deserves because of this stigma that it is simply a re-skinned Japanese title made to be another Super Mario cash cow. Dig deeper and you’ll find another well-rounded Mario title that deserves a play just like any other NES classic.

Well, that does it for me. Join me next time as we finish up the month of November with one last NES title, the original “Teenage Mutant Ninja Turtles!”

Until then, get that last-minute Thanksgiving shopping finished as the holiday rush officially begins! Game on!