From a press release: Like many arts organizations, the Scranton Fringe Festival has had to get even more creative over the last year, hosting live streams and even shows behind glass. As the coronavirus pandemic and government restrictions continue in a socially and politically divided 2021, the Scranton Fringe is offering an escape to a […] 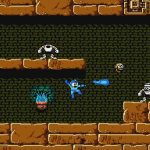 TURN TO CHANNEL 3: ‘Mega Man 4’ adds new Mega Buster, but less innovation and more lag
VIDEO: Needle Points take a trip back in time with ‘Biting at the Rose’