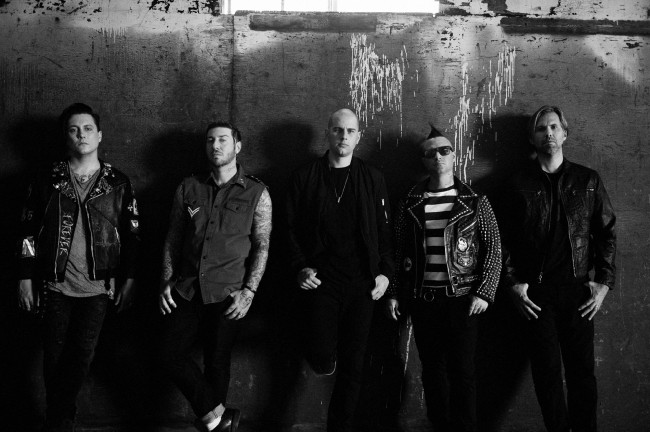 Diamond-selling metal band Avenged Sevenfold is taking The Stage World Tour with Volbeat and Scranton’s own Motionless In White to the Giant Center in Hershey on Tuesday, May 9 at 7:30 p.m.

Motionless In White, who just put out a new single and music video last week, will release their Roadrunner Records debut, “Graveyard Shift,” on May 5. They’ll join Los Angeles alternative metal band In This Moment on their Half God, Half Devil Tour this spring, which stops at the Sherman Theater in Stroudsburg on Saturday, April 22.

Avenged Sevenfold has a string of bestselling albums, among them two consecutive No. 1’s on Billboard’s Top 200 Albums Chart, along with diamond, platinum, and gold awards for album sales in nearly a dozen countries and a series of No. 1 radio singles. But Avenged Sevenfold is a group whose career can’t be summed up by simple number-crunching. More than 15 years after the release of their debut album, A7X has become a band whose sound and vision has broken through obstacles.

U.K. newspaper The Guardian recently described the group as the one metal band of their generation with genuine stadium-filling ability on both sides of the Atlantic. They’ve definitely proven themselves to be a monolithic concert draw, routinely selling out arenas worldwide and headlining some of the biggest and most prestigious music festivals around the globe, including Download (U.K.), Soundwave (Australia), Summer Sonic (Japan), Graspop (Belgium), and Rock on the Range (U.S.).

A7X “surprise-released” “The Stage” in October of 2016, becoming the first-ever rock band to drop an unannounced album in both digital and physical form. “The Stage” is the band’s seventh studio album and first for Capitol Records.

The Huntington Beach, California quintet (vocalist M. Shadows, guitarists Synyster Gates and Zacky Vengeance, bassist Johnny Christ, and drummer Brooks Wackerman) surprised millions of fans with the news while they were watching their live-streamed performance from the rooftop of the Capitol Records Tower in Hollywood, California.

The groundbreaking event saw the band give a 3D/360-degree live streamed virtual reality performance, enabling fans around the globe to view the show on Universal Music Group’s newly released VRTGO VR platform, powered by VRLIVE’s advanced technology, and experience Avenged Sevenfold’s electrifying set as if they were there for this first-of-its-kind immersive event.

Fans attended the event in-person, flooding the streets and sidewalks around the tower to experience a concert amplified by augmented reality technology, which intensifies real-world environmental elements with computer-generated sensory input such as graphics, video, and sound to enhance the live experience. VRLIVE streamed the event to 50 Samsung Gear VR headsets on the ground level of the event for fans to virtually transport themselves to the stage. Afterward, the band celebrated with fans, taking photos and sharing stories about the secretive release.

“The Stage” is the follow-up to Avenged Sevenfold’s 2013 release, “Hail to the King,” which entered the Billboard 200 at No. 1. Co-produced by the band and Joe Barresi (Queens of the Stone Age, Tool), “The Stage” is a work of immense scope and ambition, featuring 11 panoramic tracks tied together by an artificial intelligence theme. Inspired by the writings of Carl Sagan and Elon Musk, the album is the band’s first thematic release. While the term “AI” conjures up images of robots and fantasy films, A7X steers clear of a science fiction storyline. Instead, the album sees them taking a futurist’s look at the accelerated rate at which technology’s intelligence is expanding and what that means – good and bad – for the future.

Avenged Sevenfold achieved worldwide success with a string of bestselling albums, including their 2005 platinum breakthrough “City of Evil,” 2007’s “Avenged Sevenfold” – which topped the Billboard alternative, hard rock, and rock charts – and two consecutive No. 1’s on Billboard’s Top 200 Albums chart, “Nightmare” (2010) and “Hail to the King” (2013). They’ve also scored a series of Top 10 singles on multiple formats, including “Bat Country,” “Almost Easy,” “Scream,” “Nightmare,” “Welcome to the Family,” “So Far Away,” “Hail to the King,” and “Shepherd of Fire.”

In November of 2012, they made an unprecedented appearance as characters in “Call of Duty: Black Ops 2,” the biggest-selling video game of all time, which featured the band’s performance of “Carry On,” written specifically for the game. Avenged Sevenfold self-released the action/adventure mobile video game “Hail to the King: Deathbat” to rave reviews, with music, concept, and gameplay created entirely by the band. They also appeared in stores and homes globally as the featured pre-launch artist in 2015’s “Guitar Hero: Live,” including an industry-first playable live performance.

The wristband policy will be in effect for this event in Hershey. Fans are permitted on the Hersheypark Entertainment Complex property beginning at 7 a.m. on Friday, March 10. Two hours prior to the on-sale, fans will be directed in front of Hersheypark Stadium box office, where they will be issued a numbered wristband. Wristbands are available for one hour, and at the conclusion of that hour, a selected fan will randomly choose a wristband that will determine the line order.