There’s a lot of IPAs and Double IPAs in this popular hazy, New England style out there, but not all of them make Pantera references.

If you’ve got a “Mouth for War,” let’s “Rise” and take a “Walk” to Equilibrium Brewery in Middletown, New York for Vulgar Display of Flower, “an aggressive yet balanced assault on the senses” that “displays the hop flower’s assertive yet delicious nature.” Is this beer going to reach “A New Level” or feel like punch in the face like that iconic album cover?

OK, no more bad song title jokes – let’s get to it! 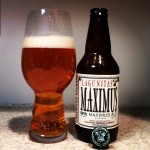 HOW TO PAIR BEER WITH EVERYTHING: Maximus by Lagunitas Brewing Company