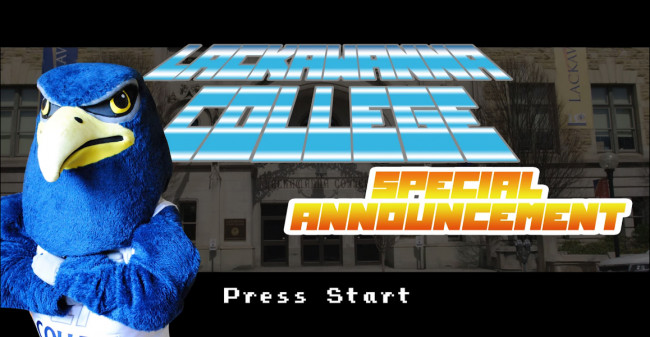 With a special YouTube video presentation in the The Peoples Security Bank Theater, Lackawanna College in Scranton revealed the addition of a scholarship-supported collegiate esports program today that will be integrated into its athletics department.

Collegiate esports – also known as electronic sports or e-sports – takes the form of organized multiplayer video game competitions between colleges and universities. Lackawanna will join the ranks of over 60 progressive institutions across the United States and Canada, offering the first known program of its type in Northeastern Pennsylvania.

By starting the program, Lackawanna will once again be a pioneer in creating opportunities for high school graduates with distinctive skill sets.

“We are providing a pathway for unique student athletes to come to Lackawanna, obtain their degrees, compete in their sport at a high level, and leave here academically, socially, and athletically equipped with the necessary tools to make a difference and be successful. We are beyond excited for the addition of esports and cannot wait to get to work building this program,” said Lackawanna College Athletic Director and Women’s Basketball Head Coach Joya Whittington.

The program has many benefits, from offering students additional athletics opportunities and scholarships to encouraging engagement on and off campus. The rapidly growing esports phenomenon is a multi-billion-dollar industry with companies developing, testing, and publishing games. Student athletes participating in the esports program also have the potential to be viewed as prospects for jobs in the video game industry.

Lackawanna will initially compete in three games – “Overwatch,” “League of Legends,” and “Rocket League.” All of the games are multi-player online games where student athletes will work together to defeat the opposing team.

Lackawanna College (501 Vine St., Scranton) is seeking applicants for the position of esports Head Coach and will begin recruiting immediately for its first teams to begin in the 2018-2019 academic year. For more information, visit lackawanna.edu.