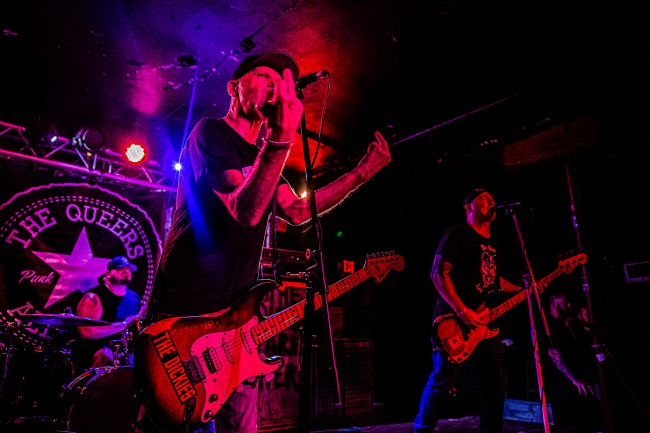 It was announced this week that legendary pop punk rockers The Queers will return to downtown Scranton, this time performing at Levels Bar & Grill on Sunday, Sept. 16.

The Queers are punk rock band formed in Portsmouth, New Hampshire in 1982. Their sound is heavily influenced by the Ramones and ’60s bubblegum pop, and their songs often feature humorous and juvenile lyrics. The original lineup consisted of Joe King, a.k.a. Joe Queer (vocals/guitar), Tulu (vocals/bass), and Wimpy Rutherford (drums). The band released one 7-inch EP with this lineup. In 1984, they released a second 7-inch, this time with Tulu on drums, Wimpy singing, and Keith Hages playing bass. The band split shortly afterwards, but King would occasionally use the name throughout the ’80s, playing with various lineups (King’s most frequent collaborators were JJ Rassler on guitar and Hugh O’Neill on drums) for sporadic shows in Boston and New Hampshire, although there were no recordings created at this time, and by the end of the decade, the band had pretty much become inactive.

In 1990, King and O’Neill decided to get the band going again and recorded the band’s first LP, “Grow Up.” Around the same time, The Queers became acquainted with Screeching Weasel, beginning a longterm association between the two bands. After “Grow Up,” King and O’Neill met Chris Barnard, a.k.a. B-Face, who would join as the group’s bassist; this would constitute the “classic” Queers lineup (although O’Neill would be in and out of the band and they would generally tour with a second guitarist). The group signed with Lookout Records in 1993 for the album “Love Songs for the Retarded” (produced by Ben Weasel) and stayed through 1996’s “Don’t Back Down.” After that, the classic lineup split for good, with B-Face quitting due to growing tension between him and King and O’Neill being diagnosed with brain cancer; he would pass away in January of 1999.

The Queers would continue with Joe Queer recording and touring with an ever-rotating cast of backing musicians. The band jumped to Hopeless Records for 2 LPs and returned to Lookout in 2002 for one album before departing the label for good.

In 2001, the original lineup of Joe King, Wimpy, and Tulu reunited and recorded an EP under the name “The Drunken Cholos.” In 2006, after releasing six albums on Lookout Records, the group rescinded their master rights from the label, citing breach of contract over unpaid royalties. Later that year, they signed with Asian Man Records, where they remain to this day, releasing “Munki Brain” in 2007 and “Back to the Basement” in 2010.

Locally, The Queers performed at the Irish Wolf Pub in Scranton in 2015, Eleanor Rigby’s in Jermyn in 2011, and the now defunct Cafe Metropolis in Wilkes-Barre in 2007 and 2008.