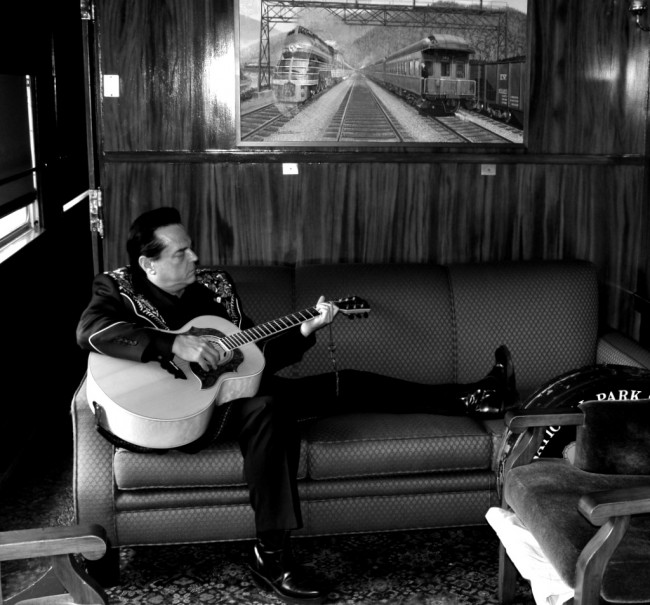 Like an old record collection that has been rediscovered, The Leonard in downtown Scranton is being dusted off and given new life, starting this year with “David Stone: The Johnny Cash Experience” on Saturday, June 6. It’s appropriate, then, that the venue’s newly named General Manager Thaz Whalen owns “a ridiculous Johnny Cash collection.”

“I’ve always been a fan of his,” Whalen told NEPA Scene. “He didn’t whine about his car or his girlfriend taking off. He talked about everyday stuff, like waking up still drunk.”

David Stone of Media, Pennsylvania embodies that honest, devil-may-care attitude perfectly, and he’s quick to note on his website that this is no mere “impersonation,” which Whalen confirmed immediately just by talking to him on the phone.

“He sounded exactly like him,” he said of Stone. “He’s that inundated in it. I’m really looking forward to it.”

So are we, so we asked Stone to prepare us for the show by recalling when his own appreciation for the Man in Black began, how The Beatles helped inspire this tribute in a way, where he found his June Carter, and why Joaquin Phoenix doesn’t call anymore.

NEPA SCENE: What was the first song you heard by Johnny Cash, and how did it affect you?

DAVID STONE: I first heard “I Walk the Line” sitting on Daddy’s lap while he let me steer his ’64 VW Beetle going into center city for “office day” with Daddy. His voice sounded like no other.

NS: How did you decide to create this show, and how long have you been doing it?

DS: Eight years ago. It was modeled after Beatlemania (friends of mine) with a bit of history, authentic sound, authentic costumes, and instruments.

NS: What was the preparation and research like to become Cash?

DS: I have been singing Johnny Cash since I was 8. I was mesmerized by his coast-to-coast ABC television show. My first LP was Johnny Cash “At Folsom Prison.” Since then, we have studied recordings and videos to ensure our show is accurate.

NS: Does that learning process still continue every day, or do you feel you have him down pat now?

DS: Never. This was an idol of country music, an idol for the poor and disenfranchised. A veteran (as I am) fighting for their rights. I want to be more like Johnny Cash every day of my life.

NS: Do you slip in and out of character easily, or is this something that you have to mentally prepare for before a performance?

NS: You play Cash through a few different eras. Do you play each era differently?

NS: What do you think was Cash’s finest period of music?

DS: When he married June Carter, got clean, and did Folsom Prison, San Quentin (we were asked to do the 40th anniversary of San Quentin and recorded a live album), and all sorts of doors opened up for him. 35 years of one of the happiest marriages ever in show business.

NS: What has been your favorite performance as Cash that you’ve done?

DS: “Big River.” It has a haunting lead guitar lick; the words are about a river (Mississippi) and a woman. He both hates and loves them both.

NS: How did you meet Leighann Burke and end up working with her as June Carter?

DS: She auditioned. She is well-known as an artist in her own right. I keep asking her to marry me, and she keeps saying, “No!”

NS: Younger generations were introduced to Cash through the film “Walk the Line.” What did you think of the movie, and how was Joaquin Phoenix’s portrayal in your opinion?

DS: I was unavailable to do the movie. Joaquin Phoenix was looking for work and I recommended him. Now the son-of-a-bitch refuses my phone calls.

NS: What do you have in store for this upcoming performance at The Leonard?

DS: Sit back. Relax. Forget your troubles for three hours. Take yourself back into some great music and history. Shake our hands afterward and pose for some photos!

DS: Come to the show!

Tickets can be purchased in advance during First Friday Scranton and online via Ticketfly.