Boy band Why Don’t We headlines 98.5 KRZ’s Let It Show at Kirby Center in Wilkes-Barre on Dec. 13 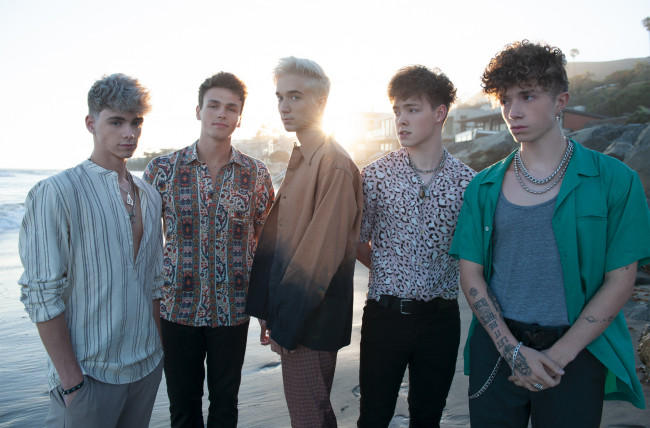 It was announced today that local pop radio station 98.5 KRZ’s annual Let It Show will return to the F.M. Kirby Center in Wilkes-Barre on Friday, Dec. 13 at 7 p.m., featuring performances by pop sensation Why Don’t We, Stephen Puth, PUBLIC, and Tatum Lynn.

The VIP Package includes a guaranteed seat in the first 12 (or closer) rows, a catered VIP pre-party, and a take-home photo with the artist selected.

Since their formation in 2016, Why Don’t We haven’t stopped. Instead, these five young men – Jonah Marais, Corbyn Besson, Daniel Seavey, Jack Avery, and Zach Herron – have forged ahead at warp speed. In under two years, they innovatively amassed a diehard fan base through grassroots engagement in the digital arena fueled by a prolific outpouring of new music, constant social media engagement, and sold-out cross country tours where online “likes” materialized IRL into millions of screaming fans worldwide.

Prior to coming together, each member stood out as a performer in his own right. Marais and Besson often livestreamed in-home performances to massive audiences as Herron served up viral covers that generated tens of millions of views. Avery built a growing a subscriber base on YouTube, and Seavey etched a space in the hearts of viewers everywhere on ABC’s singing competition “American Idol.” They crossed paths during tours and fan engagements in the midst of these burgeoning solo careers.

Soon, they found themselves on a group text where the idea of joining forces came up. Their
collective response: “Why don’t we?” The boy band’s full-length debut for Atlantic Records, “8 Letters,” merges pop, R&B, hip-hop, and even Latin vibes, reflecting their ambition to, as Herron puts it, “do something original and different and bridge gaps.”

Why Don’t We previously visited Wilkes-Barre in 2018 for 98.5 KRZ’s Summer Smash at the Kirby Center.

Stephen Puth knows that the most powerful, heartfelt songs in pop music history are about love. A singer, songwriter, and musician, Puth also writes songs that traffic in affairs of the heart. Growing up, he developed his love for music by immersing himself in classic rock and becoming enamored with legends like Van Morrison, Led Zeppelin, The Beatles, Carly Simon, James Taylor, Otis Redding, and Bill Withers. Classically trained in piano and self-taught on the guitar, he went on to become a songwriter-for-hire, having written songs for artists such as The Vamps, Pretty Much, Daniel Skye, Jack & Jack, and Stanaj before deciding to become an artist in his own right. Now as one of Arista Records’ newest signees, Puth hopes to create music that resonates with people.

“Most people’s lives consist of waking up, commuting, being at work, commuting, going to the gym, eating dinner, and falling asleep,” Puth says. “In between, there’s music. I hope my songs give people whatever they need to get through their day.”

PUBLIC is a pop rock band from Cincinnati, Ohio comprised of grade school friends – John Vaughn (vocals/guitar), Matthew Carter Alvarado (bass/synth/vocals), and Ben Lapps (percussion). PUBLIC has quickly grown a loyal fan base thanks to their electrifying stage presence. After just recently being picked up by manager Kevin Jonas Sr., the band has gone on to debut their first-ever music video on MTV and continues to create standout pop rock that’s ready for radio.

Tatum Lynn has the kind of radiant presence that lights up any moment. With her phenomenal voice and powerful range, the 19-year-old pop artist instills her songs with an infectiously hopeful energy, even when she’s exploring heavy emotional terrain.

On her full-length debut “With Me,” Tatum shares everything from feel-good dance tracks to life-affirming anthems to soul-stirring ballads, revealing the rare balance of thoughtful sensitivity and carefree spirit at the heart of her music. And in a particularly meaningful turn for the Arizona-based singer/songwriter, the album touches on such issues as the rising rates of suicide among teenagers.

98.5 KRZ is a part of Entercom, a leading American media and entertainment company reaching and engaging over 170 million people each month through its premier collection of highly rated, award-winning radio stations, digital platforms, and live events. As one of the country’s two largest radio broadcasters, Entercom offers integrated marketing solutions and delivers the power of local connection on a national scale with coverage of close to 90 percent of persons 12+ in the Top 50 markets. Based in Philadelphia, Entercom is the No. 1 creator of live original local audio content and the nation’s unrivaled leader in news and sports radio.