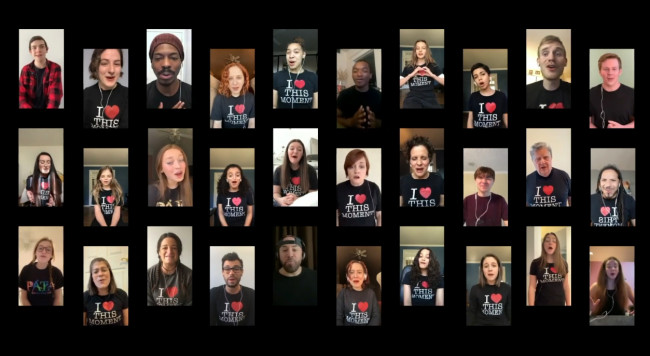 Stages all over the world are empty right now as the spread of coronavirus keeps many people quarantined, but this hasn’t stopped artists from finding creative ways to get together and perform.

PATAsphere, a nonprofit organization based in Dallas, Pennsylvania whose “mission is to provide young performers state-of-the-art voice, dance, and drama training within a safe, supportive, and engaging environment,” produced their own original musical, “Just a Penny,” in 2018, and one of the songs from that show, “I Love This Moment,” has a message that they felt people need to hear right now.

“Amidst all the uncertainty and fear that is flooding the world right now, we wanted to create something that exudes love, positivity, and pure joy. We wanted to remind people that it is possible to love this moment, even in the most challenging of moments. We hope to send out some love, keep us mindful that we can find light in the darkness, and that the curtain will once again part, the music will start, and we will find ourselves back home on the stage one day,” PATAsphere Assistant Director Tia Spagnuolo told NEPA Scene.

They decided to make a video with as many people involved in the show as possible while still practicing social distancing.

“It was a super fun challenge! Our production team – Katharine McElroy Manasco, Cari Tellis, Tia Spagnuolo, and Erin Roberts – contacted everyone who was involved with the production of PATA’s all-original musical ‘Just a Penny’ in 2018, and everyone was thrilled by the idea of this video project. 30 people in different locations, as far as Los Angeles, California, filmed themselves on their phones singing ‘I Love This Moment’ and sent the video file to the production team. We then went through, lined everyone’s file up with the music and with each other, and began the audio editing and video editing process. At the end, we put everything together. We organized and produced the entire project in four days!” Spagnuolo explained.

On Tuesday, March 24, they released the video and said, “With so much uncertainty in the world right now, we’re reminded that every moment is precious. Do what you love with the people you love. We love this moment,” quickly garnering over 5,000 views on Facebook and growing.

Those interested in seeing the rest of the musical can watch the entire show online as part of the Scranton Fringe Festival’s innovative “Social Distant-Scene Theatre,” a project launched this week that features eight high-quality live recordings from local productions and national work that will “ensure culture, community, and creativity can still thrive, even under quarantine.” Virtual tickets for each show are on sale now via Eventbrite, and the videos are available instantly upon purchase via a private link that expires on April 20. “Just a Penny” is $10, and its description reads:

In the moments before the opening of their musical, flashbacks tell the story of how the director and her talented crew exceeded expectations, defied the odds, and discovered that all they needed was a little hope, each other, and just a penny. Presented by PATAsphere, this production was recorded at a live performance of “Just a Penny” at the F.M. Kirby Center in Wilkes-Barre.

While they continue to remain positive, both students and the PATAsphere staff are eager for things to return to normal so they can get back to performing in front of a live audience once again.

“We’re all keeping our fingers crossed that COVID-19 decides to take a hike so we can run our annual Summer Performing Arts Training Academy in mid-July as planned,” Spagnuolo said.

“We will also return to weekly voice, acting, dance, and guitar lessons as soon as we possibly can.”