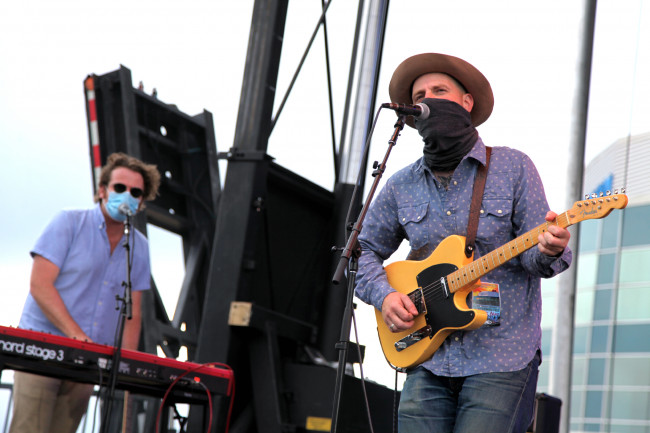 One of the music venues in Northeastern Pennsylvania that was hit the hardest by the coronavirus pandemic was Karl Hall, an intimate performance space in the basement of the Polish Union Building in downtown Wilkes-Barre that features local artists of all genres as well as touring bands.

With a small capacity that can only fit 130 standing patrons or 85 seated, socially distanced shows would be nearly impossible and not cost effective, so it has remained closed since March. Karl Hall was able to team up with the nearby Mohegan Sun Arena, though, for an online music series called “NEPA Live From Home” that featured six regional artists as well as the arena’s first-ever drive-in concert, “Come Together: A Community Benefit Concert for the Arts,” that raised money for nonprofits, theaters, and performance centers affected by COVID-19.

Karl Hall owner/manager AJ Jump helped curate the massive show with 12 unique acts, including one he drums for, The Mule Team. Now that band will headline Karl Hall’s first “out back” outdoor concert in the parking lot behind the venue (57B N. Main St., Wilkes-Barre) on Sunday, Oct. 11 with special guests The Husty Bros.

Gates open at 2:30 p.m., and the show starts at 3 p.m. and runs until 5 p.m. Tickets, which are $20 and must be purchased online in advance, are on sale now via Eventbrite. The show will be limited to 100 socially distanced seats in singles and groups of two, three, or four, depending on your party size. Masks must be worn at all times when leaving your seat. Coolers with food and beverages will be permitted at no additional cost, and bathrooms will be available close to the viewing area. If it rains, the date will be moved to Sunday, Oct. 18 at 2:30 p.m. For more details, visit the Facebook event page.

The Mule Team is an Americana group from Scranton pulling from traditional country, folk, rock, and R&B, featuring three-part harmonies and songwriting from Chris Kearney (guitar), Roy Williams (piano, guitar, pedal steel) and JP Biondo (guitar), with Ian O’Hara (bass) and AJ Jump (drums) rounding out the rhythm section – a talented cast of NEPA musicians coming together for the greater good of the song. Fans of The Beatles, The Band, The Grateful Dead, Merle Haggard, John Prine, Willie Nelson, and Ray Charles are sure to enjoy any performance from this veteran “supergroup” known for their work in local bands like Cabinet, Coal Town Rounders, And the Moneynotes, Underground Saints, and many more.

The Mule Team made their official debut at Karl Hall on Jan. 11, playing their own original music as well as favorites from Merle Haggard, Willie Nelson, The Band, Neil Young, and John Prine. The quintet has since played at The Bog and Jack’s Draft House in Scranton, the F.M. Kirby Center in Wilkes-Barre, Canteen Park in Kingston, Henry Citizens Club in Plains, and Mohegan Sun Arena at Casey Plaza in Wilkes-Barre Township.

“The Mule Team … deliberately slowed things down with some folk, Americana, bluegrass, and traditional country music while looking like Wild West bandits with their handkerchiefs pulled over their mouths for the duration of the set. Highlights included Williams’ original gem ‘Ruby Begonia’ and the clever closer ‘Drive My Car’ by The Beatles, encouraging those who weren’t busy dancing to beep their car horns along to the ‘beep beep’ of the chorus. While many bands would find crowd interaction challenging at a drive-in concert, The Mule Team showed everyone how it was done,” NEPA Scene editor Rich Howells wrote in a review of the arena concert.

The Husty Bros. are two-thirds of Three Imaginary Boys, a melodic power trio from Wilkes-Barre who released three independent albums and were named Rock/Alternative Act of the Year in the 2018 Steamtown Music Awards. According to their bio, Tim Husty provides thunderous thumpings and articulate timings on the drums and delivers the message of their songs on lead vocals. Tim also plays electric and acoustic guitars, piano, bass, and harmonica, some of which he plays simultaneously, in their live performances, and he also composes both lyrics and music for their original songs. Rob Husty sings while unleashing screaming, blistering lead guitar solos and also plays rhythm guitar, 12-string guitar, drums, bass, piano, and harmonica. Additionally, Rob composes both lyrics and music. Michael Wintermute sings and provides the throbbing, pulsating, and powerfully melodic bottom notes of the bass guitar that anchor the band so that they don’t fly offstage in a whirlwind. Wintermute also plays rhythm and lead guitar, piano, keyboards, and drums.

Tim Husty has released two solo albums, and the brothers often play together as The Husty Bros. and serve as versatile fill-ins in many regional acts.

See photos of The Mule Team performing outside the Mohegan Sun Arena in July here and learn more about the band and the various musical projects of its members in Episode 128 of the NEPA Scene Podcast, which also features a live performance of Roy Williams’ original song “Ruby Begonia:”