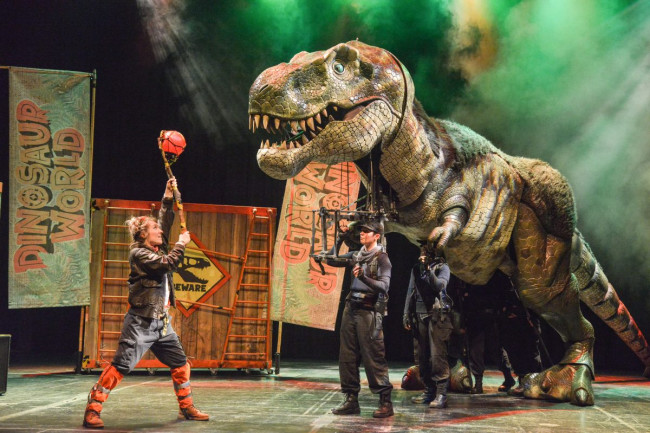 The F.M. Kirby Center in Wilkes-Barre announced today that “Dinosaur World Live,” an interactive children’s theatre show that brings dinosaurs to life on stage, has been rescheduled to Friday, Jan. 14, 2022.

The show was originally scheduled for March of 2020 and then rescheduled as “Dragons and Mythical Beasts” due to COVID-19, though that show from the same producers was canceled as well. The 2022 event will present the original show, “Dinosaur World Live.”

Doors at the Kirby Center (71 Public Square, Wilkes-Barre) will open at 5 p.m., and the event starts at 6:30 p.m. Tickets, which are $20, $25, and $35, plus fees, are on sale now at kirbycenter.org and ticketmaster.com. Patrons’ current tickets will remain valid for the new show. Refunds are available at the point of purchase.

For more information, contact the Sundance Vacations Box Office at the Kirby Center at 570-826-1100 or marketing@kirbycenter.org.

Using stunning puppetry to bring remarkably life-like dinosaurs to the stage, “Dinosaur World Live” presents a host of impressive pre-historic creatures, including every child’s favorite flesh-eating giant, the Tyrannosaurus rex, along with a Giraffatitan, Microraptor, Segnosaurus, and Triceratops.

The show introduces Miranda, daughter of palaeontologists, who grew up surrounded by dinosaurs on a far-away island off the coast of South America. She has brought her pre-historic pals to your local theater and would love you to meet them. Warning: Some of these dinosaurs aren’t as docile as they seem!

In the summer of 2020 while theaters remained closed because of the pandemic, “Dinosaur World Live” embarked on a socially distanced adventure at The Drive-In at Troubadour Meridian Water in North London. Audiences were able to enjoy live entertainment, fully contact free, from the comfort and safety of their own cars.

If parents are looking for fun things to do with the kids, “Dinosaur World Live” delivers an entertaining and educational live show that promises to delight the whole family.