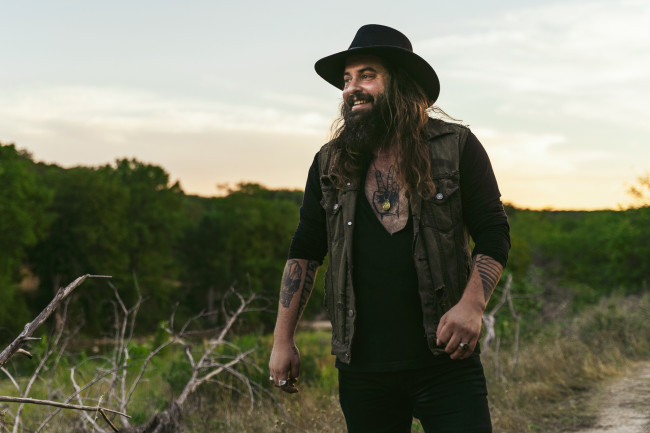 Set for release on Friday, Oct. 1, “In Heaven” is a hopeful reflection on love, loss, and enlightenment. In his eighth studio album as Strand of Oaks and first since moving to Austin, Texas, Timothy Showalter takes his own grief and newly found sobriety and manifests songs that achieve a universality rooted not only in loss, but also joy, celebration, and newfound strength.

“‘In Heaven’ was created with so much love, and my greatest hope is that it connects with people and provides a momentary space for reflection, joy, catharsis, and whatever else someone might be looking for in their life. Music is magic, and I feel like the luckiest person in the world that I’m allowed to share it,” Showalter said.

“In Heaven” was recorded in October of 2020 with Kevin Ratterman at Invisible Creature in Los Angeles. In addition to Showalter on guitars and vocals and Ratterman on drums, the album features Carl Broemel (My Morning Jacket) on guitars, Bo Koster (My Morning Jacket, Roger Waters) on keyboards, Cedric LeMoyne (Alanis Morissette, Remy Zero) on bass, and Scott Moore on violin, with special guest James Iha (The Smashing Pumpkins) on vocals and guitar on the second track, “Easter.”

In celebration of the album, Strand of Oaks will embark on an extensive nationwide fall tour that includes stops in Philadelphia on Oct. 13, Brooklyn on Oct. 18, Boston, Washington, Detroit, Indianapolis, Denver, Seattle, Portland, Los Angeles, Dallas, Austin, Atlanta, Nashville, and more. Venue and ticket information will be announced soon, and additional dates will be added.

This record is the follow-up to 2019’s “Eraserland,” which was named one of the top albums of the year by NPR Music, who proclaimed that it “brims with moments that will stop you in your tracks. … The result is a cosmic tour-de-force,” while Pitchfork declared it “soars in both its booming and hushed moments, a testament to the skills of this lockstep outfit. These seasoned players navigate Showalter’s emotional cosmos with equal parts professionalism and empathy.”

His 2019 tour supporting that album kicked off at the F.M. Kirby Center in Wilkes-Barre, a city he called home for years before moving to Philadelphia. The Indiana native is still remembered locally for his time spent living in Luzerne County and playing shows at venues such as Cafe Metropolis. In fact, he appears in a 2011 documentary about the club’s closing.

Since his debut in 2009, Showalter – performing as Strand of Oaks – has toured relentlessly with sold-out shows across the country, including concerts with Jason Isbell and Iron & Wine and appearances on “Late Night with Seth Meyers,” “The Late Show with Stephen Colbert,” NPR Music’s “Tiny Desk Concerts,” and many more.