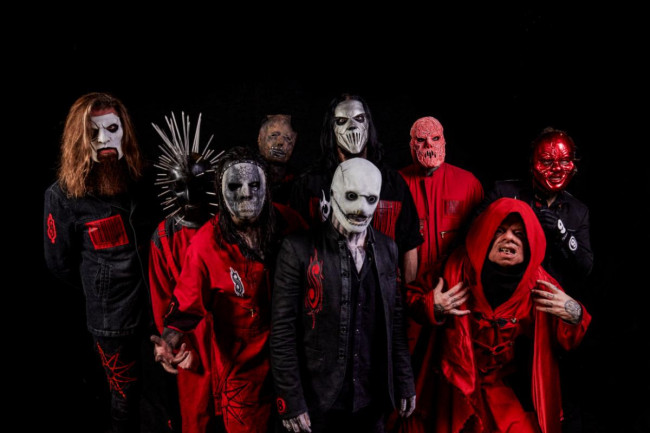 Produced by Live Nation, the 38-date North American tour will take place over two legs, both headlined by Slipknot and each containing a stop in Pennsylvania. The first leg, featuring special guests In This Moment and Jinjer, kicks off in Fargo, North Dakota on March 16 and hits 17 cities before wrapping up in Vancouver, British Columbia, Canada on April 17. It comes to the Santander Arena (700 Penn St., Reading) on Saturday, April 2.

The second leg, featuring Cypress Hill and Ho99o9, begins on Wednesday, May 18 at the Bryce Jordan Center (720 Curtin Rd., State College) and runs a further 17 cities before culminating on Sunday, June 18 in Chula Vista, California.

“It feels so good to get back out on the road with our culture. Get ready for a brand new experience. See you soon,” Slipknot percussionist Clown shared.

Frontman Corey Taylor added, “Even with everything going on in the world right now, we’re still extremely excited to come back out in the states with two different, exciting packages. Whether it’s In This Moment and Jinjer or Cypress and Ho99o9, we pride ourselves in bringing our fans the epicenter of our music and art. Come celebrate with us, and try to stay as safe as we will be.”

2021 marked a banner year for Slipknot. Making a triumphant return to the road, their Knotfest Roadshow Tour sold out amphitheaters across the country, bookended with the record-breaking Knotfest Iowa and the biggest headlining show of their career, Knotfest Los Angeles at Banc of California Stadium, where they debuted their first new music in two years – the furious “Chapeltown Rag” taken from their highly anticipated new album, expected to release this year. In addition, they topped the bills of multiple, internationally renowned festivals, including Riot Fest, Rocklahoma, Inkcarceration, Welcome to Rockville, and more.

The 2022 tour will be part of Live Nation’s Live Stubs initiative, which provides digital collectible NFT ticket stubs to ticket holders. Live Stubs will automatically be included with tickets purchased for the tour. Fans will also be able to view, share, gift, trade, and resell their live stubs at livenation.com.

Slipknot sit alongside musical institutions like Metallica and Iron Maiden as one of a select few bands whose legacy is secured within heavy music’s elite. The group emerged at the end of the 20th century from the American Midwestern town of Des Moines, Iowa and quickly established themselves as the most enigmatic, provocative, and aggressive music collective of the modern era. 1999’s eponymous debut album is widely viewed as a modern day classic and was honored by Metal Hammer magazine as the “Best Debut of the Last 25 Years.” The release racked up double RIAA platinum certification in the United States, with many of Slipknot’s subsequent releases achieving platinum status both in the U.S. and around the globe.

To date, the band has been nominated for 10 Grammy Awards (winning in 2006 for “Before I Forget”), as well as scoring 12 platinum and 41 gold album certifications around the world, plus over 3.2 billion YouTube views and counting. Slipknot’s fan base is as unwavering as it is ubiquitous – the group’s most recent studio album, 2019’s “We Are Not Your Kind” debuted at No. 1 on the official album charts of 12 countries around the world, including the U.S., U.K., Australia, Canada, and Mexico and in the Top 5 of an additional 12 countries, including Germany, France, and Sweden.

Since coming to life in 2005, gold-selling hard rock provocateurs In This Moment have presided over a diehard fan base under the watch of “mother” figure and frontwoman Maria Brink, joined by co-founder and lead guitarist Chris Howorth, bassist Travis Johnson, guitarist Randy Weitzel, and Kent Dimmel. As millions convened upon the group’s otherworldly and unforgettable concerts, they quietly emerged as an influential and impactful band. To date, the quintet has garnered two gold singles – “Blood” and “Whore” – and one gold album, “Blood” (2012). The latter notably launched a trifecta of Top 25 entries on the Billboard Top 200 with “Black Widow” (2014) and “Ritual” (2017). Bringing their total stream tally well past 200 million as of 2020, “Ritual” elevated them to new creative and critical peaks as well. In a 4-out-of-5 star review, Kerrang called it “their best vehicle to date,” and Alternative Press claimed, “Maria Brink is the Lady Gaga of the metal world,” and went on to add, “‘Ritual’ flourishes as the metal love child of art-pop, gospel, Morrissey, and Johnny Cash that the world didn’t know it needed until now.”

Between selling out headlining tours coast-to-coast, the group performed in arenas everywhere alongside Disturbed (including the Mohegan Sun Arena in Wilkes-Barre in 2019) and appeared at countless festivals, from Welcome to Rockville to Sonic Temple. Along the way, they assembled their seventh full-length, the aptly titled “Mother” (Roadrunner Records) with longtime trusted collaborator Kevin Churko (Ozzy Osbourne, Five Finger Death Punch). Whereas “Ritual” hinted at a bluesy sonic sorcery, “Mother” breathes the activating mantra of an unbreakable spell, commenced on first single “The In-Between,” which was nominated for a Best Metal Performance Grammy in 2020.

In less than 12 years, four-piece progressive groove metal wrecking machine Jinjer has taken the world by storm, emerging as one of the biggest burgeoning names within heavy metal and a rags-to-renown success story. Hailing from the war-torn province of Donetsk, Ukraine, this musical oddity has excelled against all odds since fleeing in 2014, never ceasing to push forward in an ever-changing musical landscape. Officially marking the start of the band with awe-inspiring vocalist Tatiana Shmayluk joining in 2010, they launched with cult-embraced albums “Inhale, “Don’t Breathe,” and “Cloud Factory” before skyrocketing to fame and viral acclaim with the game-changing single and video for “Pisces” from 2016’s breakout “King of Everything,” which maintains its status as one of the most reacted-to metal videos on YouTube to this day.

With their anticipated 2019 follow-up “Micro” and its groundbreaking successor “Macro,” Jinjer climbed further, achieving massive benchmarks in international touring, charting, streaming, and media recognition while snatching radio No. 1s at NACC and SiriusXM’s “Devil’s Dozen” in the U.S. After releasing their first live album “Alive in Melbourne” a year later (filmed just days before the pandemic hit in March of 2020), the band triumphed again with their most personal offering yet, 2021’s “Wallflowers.” Boasting 20 international magazine covers, countless sold-out international tour dates, and multi-millions of cross-platform streams on first singles “Vortex” and “Mediator” within just weeks, the album landed at No. 1 on both the U.S. Billboard Top New Artist Album chart and Canada’s Hard Music album chart, No. 2 on the U.S. Hard Music album chart, and within the Top 10 in several additional countries. “Wallflowers” is a sonic pressure cooker of technical musicianship and emotional fury, and Jinjer promises to bring this energy and more to the stage upon their return to North America in 2022.

Three decades ago, B-Real, Sen Dog, and DJ Muggs sparked a trip that left popular culture stoned, stunned, and staggering in anticipation for more. Naming themselves after a local street in Los Angeles, Cypress Hill burst on the scene in 1991 with the release of their self-titled debut album. The singles “How I Could Just Kill a Man” and “The Phuncky Feel One” became underground hits, and the group’s public pro-marijuana stance earned them many fans among the alternative rock community. They followed their debut with “Black Sunday” in the summer of 1993, which debuted at No. 1 on Billboard’s Top 200, garnered three Grammy nominations, and went triple platinum in the U.S. As a result, Cypress Hill became the first rap group to have two albums in the Top 10 of the Billboard 200 charts at the same time and are the first Latino-American hip-hop group to achieve platinum and multi-platinum success.

Since the release of “Black Sunday,” Cypress Hill has put out seven more albums, including 2018’s critically acclaimed “Elephants on Acid.” They made history once again in 2019 when the group was honored with their very own star on the Hollywood Walk of Fame. In 2021, they released “Champion Sound.” Produced by Black Milk, the single appears on the soundtrack of “MLB RBI Baseball 21” and is also the featured song for the band’s partnership with Montejo Cerveza. 2021 also saw Cypress Hill celebrate the 30th anniversary of their self-titled debut with a Sony reissue on vinyl, seven-inch box set, and a reissue across all DSPs that includes eight unreleased tracks, as well as a graphic novel and their very own Stance socks.

Cypress Hill continues to be busier than ever in 2022. The band will release a new album this spring and have already dropped three singles, “Champion Sound,” “Open Ya Mind,” and “Bye Bye.” Their “Hits from the Bong” documentary, which is part of Mass Appeal’s “Hip Hop 50” franchise in partnership with Showtime, will also be released this year.

Ho99o9 (Horror) is a volatile conflagration of digital hardcore punk, gritty trap-infused hip-hop, then cross-contaminated with explosive elements of industrial, electronic, metal, and noise. The experimental avant-garde project originated in New Jersey with Yeti Bones and theOGM and is currently joined by drummer Billy Rymer of The Dillinger Escape Plan. Ho99o9 has built a cult-like following over the last decade, perpetually blazing around the globe, laying waste with their legendary, visceral live performances. Their completely unique and uncompromising style has created its own lane for the future of heavy alternative music.

Read NEPA Scene’s review of Slipknot’s 2019 Knotfest Roadshow performance in Scranton here and see photos of In This Moment performing with Disturbed in Wilkes-Barre later that year here. 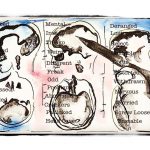 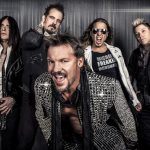