Pottsville hard rockers Crobot premiered their new video for “Legend of the Spaceborne Killer” on Yahoo Music today – one that captures the spirit of their frenetic live performances and vintage vibe. It can be viewed above.

The single is the first track on their self-titled EP, which is available now, and their debut full-length album, “Something Supernatural,” will be released on Oct. 28 through Wind-Up Records, recorded with producer Machine (Clutch, Lamb of God, Cobra Starship, Gym Class Heroes).

Crobot is currently on tour and will be returning to NEPA next week for a show at The Factory: Underground (105 N. Main St., Wilkes-Barre) on Friday, Aug. 22. The band will playing the Louder Than Life Festival in Louisville, Kentucky with Judas Priest, Korn, Limp Bizkit, and more on Oct. 5 after returning from some September dates in the U.K. A list of U.S. tour dates is below: 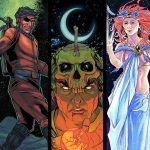