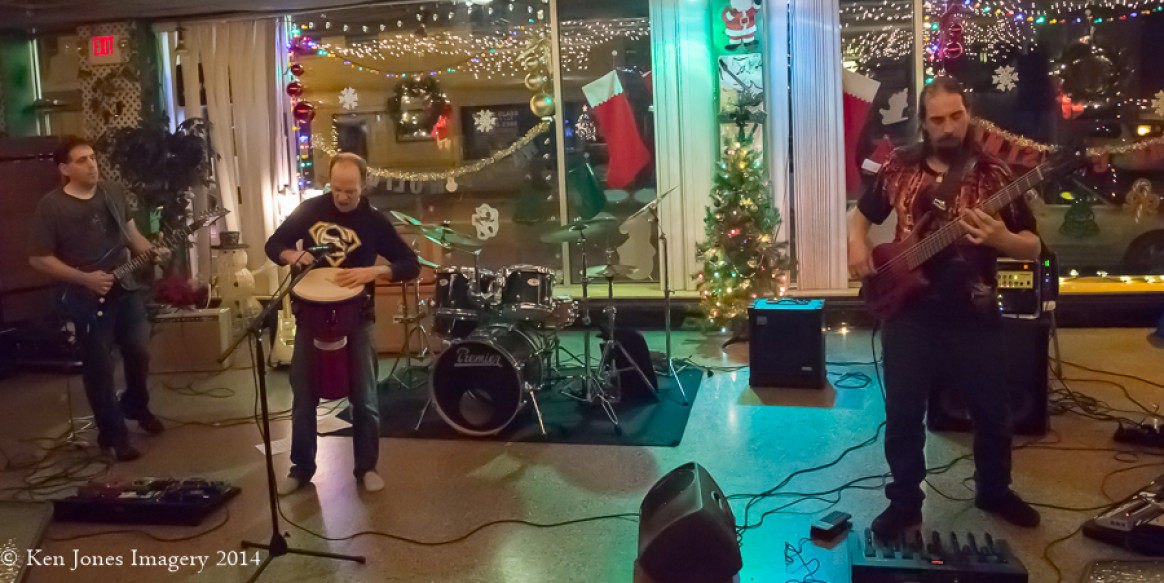 Three of Northeastern Pennsylvania’s most prominent guitarists, all currently leading very different, yet dynamically musical ensembles, combined for one of the most volatile axe-slinging evenings in recent memory at Diane’s Deli in Pittston on Saturday, Dec. 20.

Most evident during the evening was the sense of community among bands. A few nagging audio issues nipped at the heels of each band, yet none let the lingering technical difficulties drowned their performances, or their spirits. Members of each act were seen scrambling to help out with the fiddling of the PA controls during each other’s sets each time the microphone dropped out (which wasn’t nearly as much as the bands probably felt it did). The musicians having each other’s backs is truly what makes this little scene of ours home. 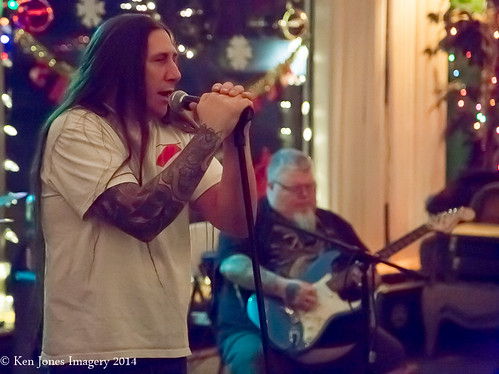 Fireball opened the evening with a throbbing cover of Jimi Hendrix’s classic “Voodoo Child” when it became clear that vocalist Donovan O’Brien would take the brunt of the microphone issues. O’Brien handled the problems with a myriad of jokes and smiles, putting the crowd at ease – the vocalist already commanded the audience with a soulful tenor that perfectly fit the classic rock fare like a higher-register Paul Rodgers through continued Fireball interpretations of non-played-out tunes, like Led Zeppelin’s “The Lemon Song” and “The Ocean.” 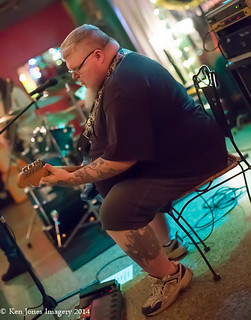 It was, in fact, Fireball’s choice of covers that could become one of the band’s calling cards. Frable gave a rather profound introduction to Stevie Ray Vaughan’s “Pride and Joy,” prefacing the Texas boogie with kind words of how the late blues titan would be a 2015 Rock and Roll Hall of Fame inductee, and the influence that Vaughan had on Frable’s playing. Two ZZ Top covers soon followed in “Arrested Driving While Blind” and the seamless segue of “Waitin’ for the Bus/Jesus Just Left Chicago,” the rhythm section of bassist Brian Tomsak and drummer Lou Taylor locking into a virile drive to cement the band’s rugged blues foundation. Other standout cuts included a sweeping staccato take on Deep Purple’s “Black Night,” with Frable’s Stratocaster singing with just the right bite of overdrive – this is a band that knows how to properly EQ their barrage.

The Phyllis Hopkins Electric Trio followed up on Fireball’s heavier blues with a decidedly edgy post-war Chicago blues flavor in the tradition of greats like Willie Dixon and Junior Wells. Hopkins, who recently released her fine eponymous album of original tunes this fall, locked horns immediately with a cover of Buddy Guy’s “Five Long Years” – her delicate yet lightning-quick, tasteful phrasing was easily a show-stealer as she carried over into barnstormers like Johnny Winter’s “Boot Hill” and Albert King’s “Let’s Have a Natural Ball.” Hopkins’ trio, rounded out by the even-timbred Nolan Ayres on bass and fill-in drummer John Carpenetti of The Russello Project, recreated an authentic slice of Windy City experience, like a hot night at long-defunct lairs like Theresa’s Lounge – locked in yet throwing three sheets to the breeze, swingin’ back and forth like an old-time saloon door. 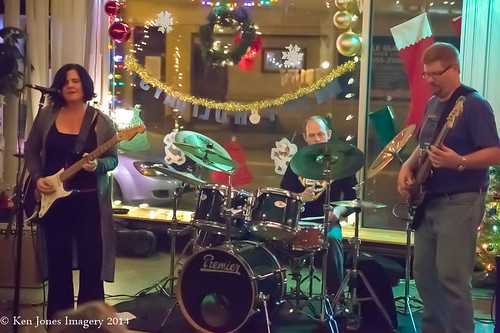 The trio dazzled with an instrumental rendition of Santana’s “Oye Como Va,” Hopkins’ perfectly executed Latin scalular runs doing the talking for her as the gently careening rhythms electrified the audience – which, though seated for the entire night, was still buzzing and writhing to the pulse of the evening’s wares. Hopkins revealed her vocal prowess on tunes like KoKo Taylor’s “I’m a Woman,” the call-and-response rebuttal to Muddy Waters’ “I’m a Man.” The opening a capella refrain of “everything gonna be alright” was evocative of the best Delta field holler, with such urgency and bust-a-gut throat-swell that surely no one in the room could deny what Hopkins was laying down. Other standouts, like an extended jam on Hendrix’s “Hey Joe,” were fun caps to a well-rounded set. 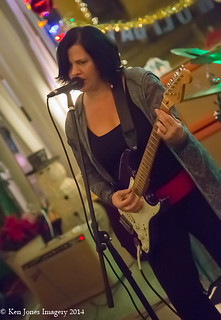 The Russello Project closed the evening with their soon-to-be trademark blend of instrumental wizardry and rock abandon, all of which will soon be documented on the group’s in-the-works debut album and live DVD, according to main man Charlie Russello.

The Russello Project is, simply put, a musician’s delight. The outfit offers shredding without the extraneous look-at-me wanking: vital, melodic hooks and atmospheric ambience – sort of an aural movie unfolding where the plot is anyone’s guess. The band relishes in transcending firmly planted musical themes into almost a wisp of musical smoke – it truly does envelop you. The complement of drummer Carpenetti, who dabbled in light, almost tribal hand percussion at points throughout the evening, and bassist Mike Bosi, whose plethora of pedals at his feet made for the added twist of synth-bass nirvana, only enhanced the bedrock of Charlie’s Guitar Institute of Technology-bred virtuosity.

The band ran through original material like “54,” which features a Rush-like ascending riff that kicks off the song, then immediately cools down with a rubbery funk feel, only to ignite again with a series of chunky, metallic, 1970s-inspired rhythmic blasts – the trio never resort to a standard backbeat to propel their sonic fist. Numbers like “Pidge” were the stuff daydreams are made of, with a delicately distorted, open-chorded intro and melancholic waft of progressions, offset by the quick and distinct Steve Vai-like fret-sliding notes and off-the-cuff improvisation, ending with Russello’s notes bending into Jeff Beck-ish trail-offs – not only a haunting display of instrumental prowess for sure, but a well-chosen vocabulary. 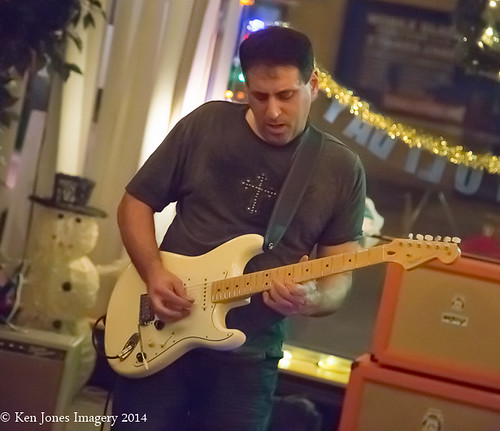 A highlight of Russello’s set was when Charlie brought Phyllis Hopkins back up for a would-be guitar duel on Led Zeppelin’s “Since I’ve Been Loving You.” The song’s late-night, last-call vibe and frequent swells made the already desirous song feel that much more intense, with Hopkins virtually pouring out her soul by the time the lyrics reached, “I said it kinda makes my life a drag” – Russello and Hopkins traded licks like merchants of fire in the steamy, minor-key blues. 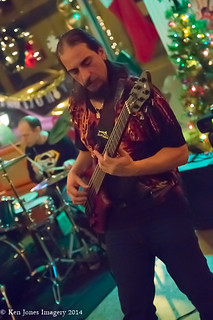 Charlie Russello’s easygoing stage presence made his spoken introduction to “Fly Away” all the more gentile, prefacing the song with, “This is one of those compositions that makes you want to just drift away,” which became a reality upon hearing Bosi’s orchestral bass intro, complete with angelically flanged hammer-ons and finger-twisting theatrics. The song was indeed a slice of midnight cool, allowing the listener to close their eyes and appreciate the lip-quivering melodic passages and light curves, until halfway in, where the tempo is ratcheted up in a maze of sweep picking and snare slams – a dramatic way to close out an evening where the instruments were the stars of the show.

NEPA musicianship at its finest and presence to burn, with so much talent in the room it could be cut with a knife, these are three outfits that raise the bar for homegrown club acts throughout our region and beyond.