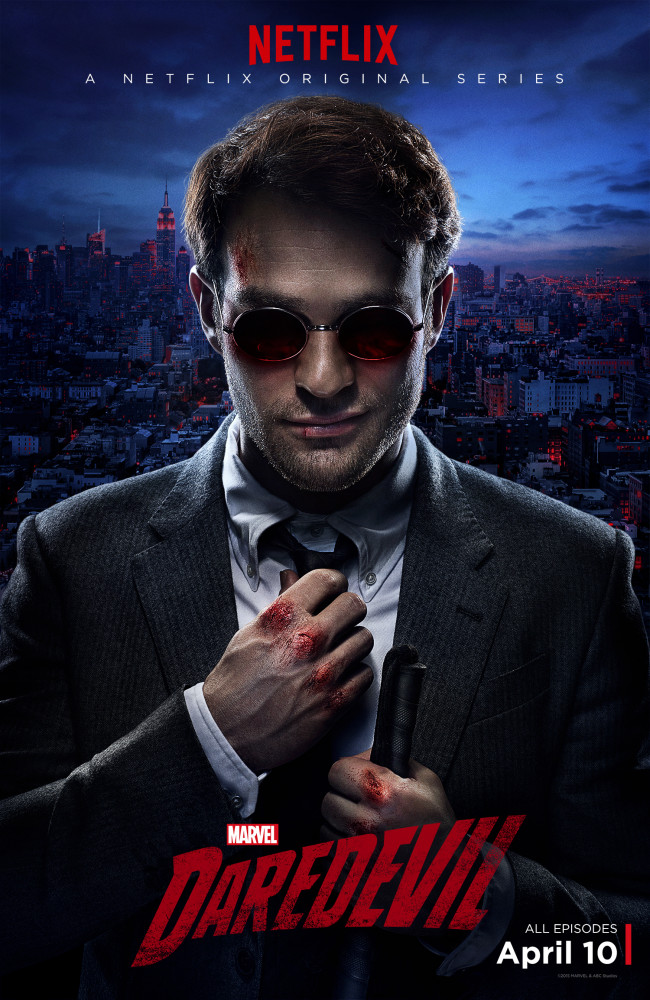 A few weeks ago, I was going to write a column about how “The Flash” is currently the best superhero show on television, but I hesitated because “Daredevil” was set to premiere on Friday, April 10 on Netflix. By Saturday, the Man without Fear had beaten the Scarlet Speedster for that title – and Barry had one hell of a head start.

My next idea was to binge-watch all 13 episodes of the new series and write something in a 3 a.m. trance of sleeplessness and giddy fanboy stupor, but after taking in five episodes in a row, I realized that I needed to savor this, just as everyone involved in creating this production did on-screen. Nothing is rushed, yet so much ground is covered in each episode. The first hour alone was a better film than the entire 2003 Ben Affleck movie, and I know that isn’t saying much, but each episode really does make you feel like you’re watching an extended movie – or just one single movie shot by Peter Jackson.

Speaking of directors (and series cinematographer Matt Lloyd), the world of Hell’s Kitchen is absolutely engrossing. It feels like New York, but the palette of neon colors and dark shadows gives it that classic Frank Miller comic book aesthetic that really ties everything together. Because both Matt Murdock, the blind lawyer who hits the streets at night as a masked vigilante, and Wilson Fisk, the shady overlord who is responsible for much of the crime in those streets, take personal ownership of this part of the city, it’s only a matter of time before they come into conflict, and both men feel like they’re improving Hell’s Kitchen in their own way – legally and illegally. Fisk, better known to fans as the Kingpin, isn’t even seen until the third episode, and even then, it’s only a brief glimpse. The iconic costume and Daredevil moniker won’t come until even later than that. As I said before, it takes its time, and the characters greatly benefit from that.

So do the actors. Charlie Cox is the right mix of charming, sympathetic, and badass as Murdock, while Elden Henson, as his best friend and business partner Franklin “Foggy” Nelson, is hilarious, but you feel for him too – for all the characters, really. From Deborah Ann Woll as Karen Page, their secretary and a victim of a bigger conspiracy, to Vondie Curtis-Hall as Ben Urich, an aging journalist trying to investigate this plot while his wife is ill, to Rosario Dawson as Claire Temple, a nurse who patches Matt up whenever he needs it and gets wrapped up in his world as a result, each actor is completely down-to-earth and believable in their respective roles, but it may be Vincent D’Onofrio who deserves the most credit, aside from Cox, of course.

I was a tad skeptical of his casting, and not because I didn’t think he was a good actor, but because he spent so much time overacting on “Law & Order: Criminal Intent” – I’m talking William Shatner at a Shakespeare festival levels of overacting here. But what’s brilliant about D’Onofrio’s performance in “Daredevil” is that, despite all the horrible things we know he’s responsible for and how feared he is by even his own henchmen, many of his scenes reveal his awkward, vulnerable side as he starts dating, many times juxtaposed with scenes of horrible violence he has caused. We watch him brutally murder someone, yet soon after we still feel sorry for him. He’s both pure evil and a big man-child, sometimes in the same situation, and it’s fascinating to watch. Even his love interest, Vanessa Marianna, is much more than she seems at first.

One of the major issues with the 2003 movie was that every character was so over-the-top that every time the actors or filmmakers tried to pull at your heartstrings, you were too busy laughing at the awful lines and even more awful soundtrack, which was already dated upon its release, to care. Subtlety is key in the new “Daredevil” series. From the simple costume to the music to the structure of the episodes, everything is deceptively simple and demands a second watch.

The Easter eggs for fans are more impactful than they may seem at first as well. Right away, it’s established that this series takes place after the alien invasion in the first “Avengers” film, but what audiences may not stop to think about is that most of what’s occurring in “Daredevil” is a direct result of the Battle of New York; Matt and Foggy are able to get cheap office space and establish themselves in Hell’s Kitchen because of the damage, and Kingpin and his cronies are profiting from rebuilding the city. Instead of consistently namedropping superheroes or having movie actors show up for useless cameos, the connection to the Marvel Cinematic Universe is as realistic as the gritty tone they establish – how did this huge, otherworldly battle affect everyday people? It’s an angle that many of the best comic books out there have utilized successfully, so why not this TV adaptation?

Everyone who has been talking about this series has praised the fight sequences – believe the hype. The biggest problem with superhero TV shows has always been limited TV budgets – fans have to put up with either cheesy special effects or extremely short fight sequences to fit within those confines, but with no commercials and a “street level” hero, that goes right out the window… and down several stories onto the concrete below. The action is authentic and intense – bones are broken, blood is spilled, and Daredevil isn’t afraid to get his ass handed to him. His powers are hinted at, but rarely shown because, at the heart of this, he’s still human and can still be easily killed. The single shot hallway fight scene is the best I’ve seen since the original “Oldboy,” and as he sways and spits out blood and struggles to stay conscious so he can save a kidnapped boy, enduring almost as many hits as he delivers, you feel like you’re watching a real hero triumph. The devil really is in the details.

All this and I’m not even done with this first season yet.

After the bumpy (but steadily improving) ride that “Agents of S.H.I.E.L.D.” has been, it’s clear even to a blind man that Marvel has finally found its footing on television the same way it found it in its movies – with a little trial and error and a firm grasp on what makes its characters great and ultimately timeless. If Marvel could bring that same respect and understanding to its current animated lineup, they’d be unstoppable on all fronts, but that’s a column for another time. For now, I’m just going to enjoy this series until the next one premieres.

And when it does, I’m taking my time, Internet spoilers be damned. This kind of quality doesn’t come along every day, but hopefully it will at least a few times a year from now on. On second thought, maybe Netflix is the real hero here.