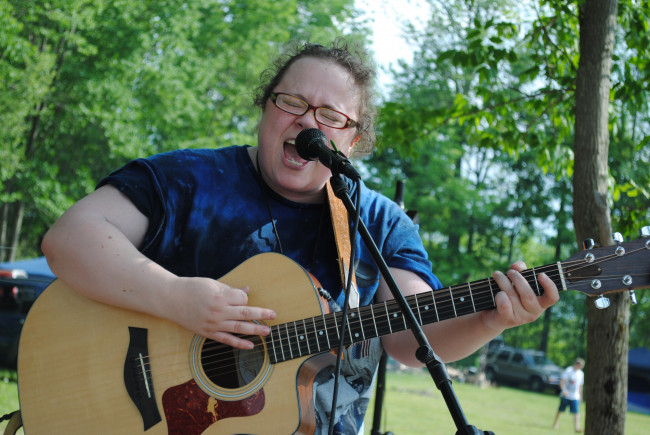 Armed with a guitar and a t-shirt depicting a cat in a spacesuit, Katie Kelly shared her musical talents with the friendly and captivated audience in front of her on the Camp Rattler stage at NEPAPALOOZA at Mountain Sky in Jermyn on Saturday, May 30.

On the second day of the independent music festival, things were far from winding down. Festival-goers in front of the Camp Rattler stage were ready and excited for more when the 30-year-old Wilkes-Barre native took the stage, accompanied by her friend Aaron McCurdy on mandolin.

Kelly’s favorite thing about music festivals is being able to go from stage to stage to hear different music, an opportunity many people took throughout the weekend. She expected the festival “to be a blast and a lot of fun,” and it met her expectations because the attendees “want to hear what’s going on,” and she believes there is “a lot of camaraderie” in festivals like NEPAPALOOZA.

Kelly’s sound is what she describes as “outer-folk,” because she approaches writing her songs as a folk song, with just acoustic guitar and voice. After she finishes a song, she takes it to her band, the Charming Beards, and they add some things and change it around a bit, where it becomes something new and different.

“I love people putting their input into stuff that I’ve written,” Kelly noted in an interview after her set.

Surrounded by music from a young age, Kelly always wanted to play guitar, but her parents made her learn piano first. After six or seven years of piano, they finally allowed her to pick up the guitar. She first played guitar in front of an audience at a high school talent show, and she has been performing ever since. Although she gets stage fright before each performance, she will never forget how nervous she was that first time.

“I don’t think I have ever been more nervous in my life. I don’t even know how I sounded on stage,” she reminisced.

On stage, Kelly jokes about being awkward, and off stage, she mentions being nervous in interviews, but once she starts playing her music or even just talks about it, her awkwardness and nerves disappear and her passion takes over. Kelly clearly loves what she does, putting her all into her songs and performances, and her emotion is clear. Then she leaves it all on stage.

“I think when I’m not performing, I’m just kind of laid-back … so playing the music is cathartic,” she explained. “I kind of build it up and then let it out on stage.”

Whether the songs are deeply personal, like “Cigarettes and Whiskey,” or are more distanced from her personal life, Kelly can draw the emotions that fit the song while on stage.

When writing, Kelly looks to folk musicians like Bob Dylan, Joan Baez, and Peter, Paul and Mary for inspiration. She pulls from her experiences, and while many of her songs are personal, “they’re not revealing” about herself. She also draws from folklore and the stories of other people, which she fictionalizes as much as she can. One song she has is about an elderly couple who were each other’s best friends, even after 45 years of marriage.

“That is the kind of love story I want to hear. I don’t want to hear about whatever goes down in the club,” Kelly emphasized.

That song only took about 10 minutes to write because of how much of an impact it had on her. While that one came easy, that isn’t always the case.

“I’ve been writing the same song for about a year and a half. You get lucky sometimes and you just scribble it all down, and then other times, you get one line and you’re done for four months,” she said.

One of Kelly’s tunes almost got her into some trouble. The person she wrote the song about was not too happy and threatened to sue for libel, but everything she said in the song was true, so there was no case. The song was about an incident in her high school involving a teacher and a student, and Kelly was “enraged with what the school district had not done to prevent something like that from happening multiple times.” Even though this song has caused her problems, she doesn’t stop playing it because “that kind of stuff happens over and over again” and it’s a “pattern of people in authority shoving something like that under the rug to maintain appearances when it’s something horrible.” She uses it to spread awareness because the situation that was her inspiration didn’t make the news, and the only person who suffered was the victim. Kelly does not want to see these things happening again and again, so she does what she can.

Kelly currently has a lot in the works. She is working on an album with McCurdy that focuses more on folk sounds with basic country structures. The Charming Beards are a heavier band that play her songs, but with different instrumentation, so with them, she’s working on a concept album about the brain, but that is just in the beginning stages and has a long way to go.

Tickets can be purchased via Eventbrite. For more information and promo code discounts, see the Facebook event page.