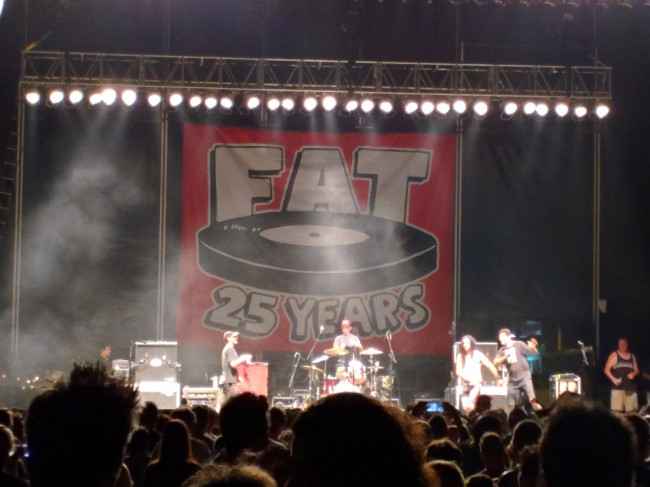 On Saturday, Aug. 15, Fat Wreck Chords brought their 25th anniversary tour, showcase, festival, or whatever the hell you want to call it, to the open-air venue of Philadelphia’s Festival Pier at Penn’s Landing for an afternoon and evening of raucous punk rock. The day was filled with bands both old and new to the label, appealing to the diverse crowd present – and I do mean diverse. Punks in their 50s could be seen mere feet away from punks in their late 20s/early 30s with their punk rock toddlers. Seriously, though, it was so fucking adorable, I could puke and still have a giant grin from ear-to-ear. It’s almost as if it was a sign from the punk gods that it (punk, that is) won’t die anytime soon. But I digress… onto the show itself!

The music kicked off at 3 p.m. with Bad Cop/Bad Cop, followed up by toyGuitar, two newer bands to the label. Unfortunately, due to the notoriously terrible traffic found on “the Sure-kill,” I was not able to see their sets. Sorry, guys. I’ve heard some really good things about both bands, and I was really looking forward to what they were going to bring to the show.

By the time my friends and I did arrive at Festival Pier, we were in time to see Masked Intruder take the stage. Playing next to punk bands that I have been listening to for more than a decade, these guys definitely made an impression. They brought nothing but high-energy punk, with great hooks and just the right touch of angst in their set. If you have not seen or heard of them, they are a gimmick band, but not in a negative way. The band performs wearing individually colored ski masks, never giving up their true identities (because they’re criminals, after all) and claiming that the band was formed while they were doing time in the pokey.

Masked Intruder’s gimmick doesn’t end just with appearances, however. Their tough, “prison-hardened” personas made for hilarious banter between songs as well. I found myself laughing from the absurdity of it all, but quickly moved into rocking out to their music. Their songs run the gamut of motif tracks such as “Stick ‘em Up,” “25 to Life,” and “Crime Spree” to more traditional, and even heartfelt, punk tunes like “Breakin’” and “I Don’t Wanna Say Goodbye to You Tonight.” Honest to God, I did not think I would fall in love with them, but they truly grew on me. Check them out as soon as you can; you will not be disappointed.

The Flatliners were up next, and the one thing that they had going against them was that they had to follow Masked Intruder. Don’t get me wrong; they had some good tracks and definitely had energy in their performance, but they could not meet, or exceed, the vigor that Masked Intruder brought to the stage. Maybe I needed to come down from what I had just experienced, but nothing of note stood out to me during their set.

The next band on the bill also marked the point in the show when some of the pillars of Fat Wreck Chords began taking the stage. Up next was punk rock icons (in my mind, anyway), and Fat Wreck Chords mainstays, Swingin’ Utters! The Utters brought their old school punk style to the masses with lively tracks spanning their catalogue. A great moment – personally speaking – was seeing them end their set with the first song that made me an instant fan in the first place – “Next in Line.” The song goes from a slow-tempoed doldrum to an outright blistering track of angst and rage that can get any pit going in a blink of an eye, and it was a great lead-in to the rest of the night. On another personal note, seeing a friend, who has never heard Swingin’ Utters before, turn into an instant and loyal fan put a smile on my face. I guess that’s simply the magic of the punk rock.

Keeping the lineup rolling along, Strung Out took to the stage with more of punk rock’s lineage. I wish I had kept up with them more over the years because they definitely have matured as a band since I stopped following them. They have this “power punk,” or maybe the better term is “arena punk,” vibe to their sound, but in a good way, if that makes sense. Plus, they seemed to have become even faster with age! A lot of their songs seemed new to me, yet triggered vague memories also. This could be from a fading memory of a band that I once listened to regularly, something that I’m not proud of saying considering how much of a fan I once was. In any event, they had the crowd eating out of their hands and left them wanting more.

The penultimate band of the day was Lagwagon. Another old school favorite of mine, I was absolutely thrilled to finally be able to see them live. They put on a really good performance, paying homage to Tony Sly and No Use for a Name with a cover of “Exit” and ending with the hit “May 16,” but their time on stage ultimately wasn’t all that it was cracked up to be. Sure, they were good, but I think they suffered the same fate that The Flatliners did, following super energetic bands and not meeting that same energy. Just as Masked Intruder did, Swingin’ Utters and Strung Out played their balls off, and I think while Lagwagon had a good performance, it couldn’t quite meet the vitality of the previous two bands. On any other day, however, I believe Lagwagon would have absolutely killed it!

Lastly, with the sun having retreated below the skyline and the crowd at its largest of the day – people had been amassing as the hours waned – NOFX took the stage to a deafening roar from those assembled! Fat Mike, bassist of NOFX and founder of Fat Wreck Chords, dressed up for the occasion – this is a 25th anniversary tour, after all – in a slimming blue dress with spaghetti straps that ended mid-hips. Melvin (rhythm guitar), El Jeffe (lead guitar), and Erik Sandin (drums) were dressed ultra-casually; Melvin wasn’t even wearing a shirt, as per usual. Clearly, this was going to be an amazing set.

That last sentence is an absolute understatement. NOFX claims to only give “60 percent” at their shows. I feel that is furthest from the truth. There are all kinds of bands you can see live in concert. Some of them feel like you’re in the middle of a rage-fueled battlefield, others feel like a political rally, and then there are some that are purely enjoyable. NOFX’s performances feel like they are parties! They are 100 percent unadulterated fun, and if you aren’t having a great time, there is something medically wrong with you! There is also no illusion as to how much the band itself parties before and during their performances. Throughout the set, Fat Mike called out for more vodka drinks to be ushered his way, and who knows how much he consumed beforehand? That being said, their predilections did not hamper their ability to play, and you can tell that they really enjoy what they do.

Also, if you’ve never seen a NOFX show before, holy shit is there a lot of banter going on! Between comments and jokes at the expense of band members, celebrities (a comparison was made between Fat Mike’s dress and Lenny Kravitz’s recent wardrobe malfunction), and even audience members, the laughs didn’t stop coming. Maybe that’s another reason why their live shows feel like all-out parties; they are so comfortable on stage and make you feel like they are completely accessible to anyone in the crowd.

In any event, they hit the stage and got right to business by rocking the crowd’s faces off! Their set was kicked off with the blistering “Seeing Double at the Triple Rock,” “Murder the Government,” and “It’s My Job to Keep Punk Rock Elite.” Hell, it’s saying something when you consider some of the slowest songs they played were “Leave It Alone” and “Radio” (a reggae-fied cover of a Rancid song). Their set included other hits like “Linoleum,” “72 Hookers,” “The Moron Brothers,” “Leaving Jesusland,” and “The Separation of Church and Skate,” but they also played the entirety of their “Longest Line” EP (albeit kind of split during the night). Their encore consisted of “Reeko,” “Soul Doubt,” “Remnants,” and lastly “Kill All the White Man.” NOFX remained on stage lip-syncing, dancing, and celebrating to “Everyone’s a Little Racist” from “Avenue Q.” To be fair, I could have remained there for another hour or so listening to more of their collection, but all good things must come to an end.

The only way the show could have possibly been better than it was is if the East Coast had some of the West Coast’s bands from the tour included in the lineup. Yeah, I’m a bit jealous, OK? Why couldn’t bands like Me First and the Gimme Gimmes, Snuff, and No Use and Friends, to name a few, play the East Coast leg too? I’ve wanted to see those bands for ages now! I guess I need to resign myself to the fact that I may never see certain bands live. At this point, I am totally nitpicking. In the end, the entire day was absolutely fantastic! There is nothing better than listening to great music with great people – friends and like-minded strangers alike. If you did not have the opportunity to see this show, I truly wish you could have. Fat Wrecked for 25 Years will be a show that I will not forget any time soon. Hopefully, Fat Wreck Chords and NOFX will be around for another 25 years, and hopefully they will continue to keep punk rock alive (and elite) the way they did Saturday night.

DRINK IT DOWN: Wolf Among Weeds Double IPA by Golden Road Brewing