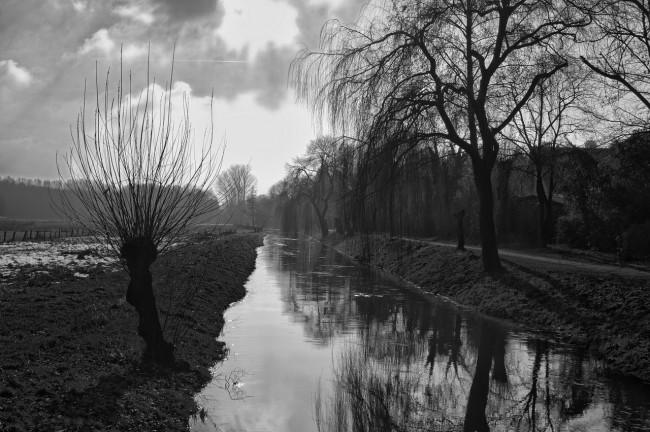 “We’re a hard rock/metal band with aggressive lyrics, and we’re out to blow the roof off anywhere we play.”

That’s how vocalist Clay Hawk bluntly described Black River’s Edge, a brand new group blasting out of West Pittston, and with his kind of passion, it’s safe to assume that Diane’s Deli & Internet Cafe will be in the market for a new roof after this Saturday, Sept. 5.

The band is making their live debut there, but this isn’t Hawk’s first rodeo. Born and raised “on the top of a mountain in Harding,” the 42-year-old was the singer for Snapped, another hard rocking band from Pittston, and now he’s got a whole new mountain to climb with Black River’s Edge. Thankfully, he already has a leg up, as their first full-length album, “Hawk Unleashed,” is already finished and set for release on Saturday as well.

NEPA Scene conducted Hawk’s first-ever interview about Black River’s Edge to learn more about what exactly he will unleash upon Northeastern Pennsylvania tomorrow, at the Electric City Music Conference on Saturday, Sept. 19, and in the foreseeable future. 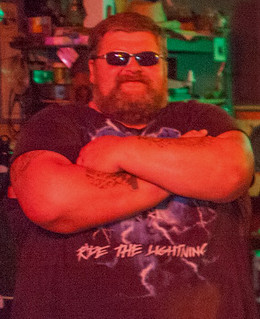 NEPA SCENE: How did you get started in music?

CLAY HAWK: I got started in music after a conversation with my then-10-year-old daughter, Ali. I was explaining to her that she can accomplish anything she sets her mind to. She said, “Really? Then I want to see you become a singer that writes your own music. And I want to hear it on the radio, Daddy.” I started getting together with friends who are musicians, and we became the band Snapped in 2012.

I came to truly love the process of writing and performing original music. In 2013, our “Faceplant” album was recorded at JL Studios. Our music was played on the radio. Due to other members of the band not wanting to play live shows, Snapped fell apart, but that’s how I got my start in music.

NS: Tell us about the formation of Black River’s Edge.

CH: After Snapped fell apart, I still had a lot of song ideas bouncing around in my head. I got together with Joe Loftus of JL Studios in Olyphant; he helped turn my ideas from concept to concrete. It was just the two of us who wrote the “Hawk Unleashed” album.

As the album was being written, I began searching for band members to take this album out live with. A very close friend of mine, Zipdug, is one of the rippiest drummers I have ever known and was my first recruit earlier this year. He was followed by Josh Androscavage, an amazing pick-less bass player and all-around really great guy. Last, but not least, I picked up Frankie Fingers while he was hitchhiking this past July, and he has been a really great and talented addition to Black River’s Edge.

NS: What makes this group different from Snapped?

CH: I think what distinguishes us from Snapped is that we all share the same drive to take this project out to the public and play it live. We get pumped up when we play our original music live and can see the crowd get psyched.

NS: How did you decide on and develop your sound?

CH: There’s a lot of variety in the song styles on the album. We didn’t really set out with a particular sound or style. We write music that we like and hopefully it will strike a chord with fans as well.

NS: How did you choose the name of the band?

CH: I honestly can’t remember. We were tossing around ideas at practice, and the morning after a particularly hazy night, we were Black River’s Edge.

NS: What was your experience like in the studio this time around?

CH: I don’t recall the exact date we started. It was pretty much whenever Joe Loftus could squeeze me in at the studio. I would show up with some lyrics and a melody that were floating around in my head, and by the end of the day, we had a finished, recorded song. The entire album was written in just 10 days, one song a day, over the span of several months. The experience was incredible. Working with Joe was inspirational, and we had a blast.

NS: What was your inspiration for these songs?

CH: Life. The crazy stuff you see, the things and people you deal with. Society. Pretty much anything and everything can inspire us.

CH: I have no verbal filter, and this sometimes this gets me in trouble. But, we’ve all seen Facebook sluts and probably know at least one. It’s not so much a calling-out of Facebook sluts, just a fun song acknowledging them. Facebook sluts probably enjoy the attention anyway. There are many men who truly appreciate the Facebook sluts of the world, and we hope they enjoy chanting along with “Facebook Sluts.”

NS: Why did you call the album “Hawk Unleashed?”

NS: What made you guys want to record your debut album before your first live show?

CH: The album was being completed as I was searching for band members who are not only talented, but also share the same ambition to take original music out publicly.

NS: What can people expect from your inaugural show at Diane’s Deli?

CH: Our inaugural show at Diane’s Deli in Pittston is our CD release party for the “Hawk Unleashed” album. The first 50 people through the door can expect a free beer on Black River’s Edge, and everyone can expect an awesome night of music from Earthmouth, I Trust You to Kill Me, Silhouette Lies and, of course, Black River’s Edge. 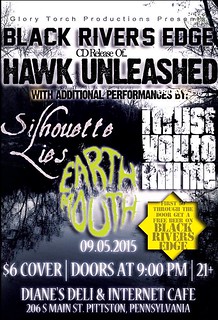 NS: How did the lineup for the show come together?

CH: Our CD release party at Diane’s Deli was put together by Greg Schaffer of Glory Torch Productions. It was nearly effortless on our part. He coordinated the band lineup and the promotion, including the awesome poster for the show. Big, big thank you to Greg!

NS: What are you most looking forward to about the show?

CH: The roar of the crowd and to see everyone having a good time.

NS: Next you guys will be performing at the Electric City Music Conference. What can you tell us about that gig?

CH: We were invited to play the ECMC metalcase show on Sept. 19th at the New Penny in Scranton. This show features Gladiators, a national touring band from Lancaster. We will also be performing along with Silhouette Lies, Earthmouth, Death Grip, Foul Taste, and Blue Coal.

NS: What’s after that for Black River’s Edge? What are your goals for the band, and what do you think the future holds?

CH: After the ECMC show, we will be performing more live shows, with dates and times to be announced. We will be enjoying the benefits of the current network of local bands that is making a resurgence in the area, due largely to the influence of local radio star Freddie Fabbri, who shows his love and appreciation of NEPA’s music scene always. We hope our future holds many live performances that will provide our fans with awesome music, good memories, and great times.

The show is 21+. First 50 attendees through the door get a free beer on Clay Hawk. For more information, see the Facebook event page.

The show is 21+. For more information, see the Facebook event page.