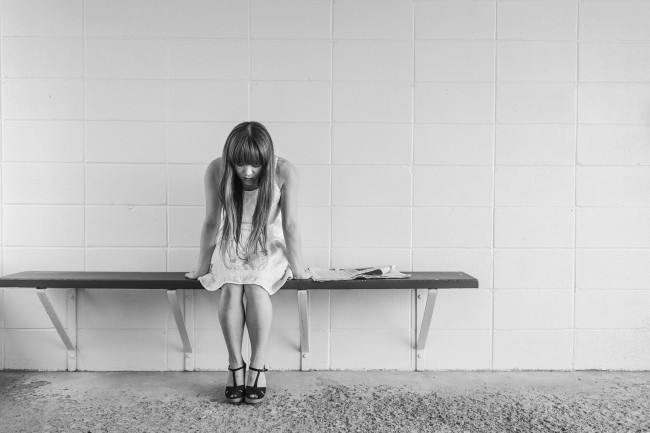 In this week’s column, let’s talk about depression. Because it’s real, it sucks, and I have it.

In case you haven’t noticed, it’s been two weeks since I last wrote an article. Trust me, it wasn’t for lack of things to write about. We had a lot of awful things happening, including Germaine Greer, a well-known feminist writer from Australia and noted transphobe, saying that transgender women are “not women.” But I don’t want to talk about her. Her comments are awful, her ideas are exclusive and dismissive of transgender women, and the fact that Richard Dawkins backed her up left me angry, with a bitter taste in my mouth, all week.

I desperately wanted to write about how I refuse to support a feminist philosophy that excludes transgender women, and I have serious doubts about how such a view is going to further the advancement of women, but every time I tried to write about it, nothing came out. A few sentences, some false starts… that’s it. I had a lot to say, but ultimately decided Greer wasn’t worth putting myself into a negative space. So I didn’t.

The week after that, following the elections, we heard the horrible news that Houston had voted against a non-discrimination policy that included the LGBT community, known as HERO (Houston Equal Rights Ordinance). Why? Because bathrooms.

A coalition of conservative pastors claimed that HERO would infringe upon their religious beliefs regarding homosexuality. In the months prior to the election, opponents focused their campaign on highlighting one part of the ordinance related to the use of public bathrooms by transgender individuals, alleging that it would open the door for sexual predators to go into women’s restrooms.

These arguments, of course, were patently ridiculous. But the voters of Houston bought it. They voted for it, and now the entirety of the LGBT community faces losing their job security, their homes, and their freedom to live open, normal lives.

Again, I had all these powerful arguments lined up, counter-attacks designed to point out the lunacy and ludicrous nature of the people who voted for this to happen. I even went on a short-lived campaign to take pictures of myself in women’s restrooms, which raised some good points and got great feedback, but I didn’t write about it. The deadline came and went; I had nothing to submit. I just couldn’t get the words to flow.

My life, prior to transitioning, was a miserable mess. When the pain of not living as myself finally outgrew the fear of whatever negative things might happen to me, I decided there was no other choice to make. One way or another, I was ending that life. I’ve written about this dozens of times, given speeches on it, had conversations with countless people over it, so there’s no need to go back into it. But the one thing I did not anticipate was my depression coming back. I thought, somehow, magically, those days were over, and I would never again sit in my darkened room, staring out the window, wishing to end a life of hopeless despair. And for a long, long time, it didn’t. Until it did, about two weeks ago.

The details are unimportant. A breakup + gender dysphoria + financial difficulties + body dysmorphia – these things came together in a deadly cocktail that left me alone in my apartment, crying every night. When I had to, I could pull myself together and go do whatever needed to be done. The pictures posted to social media made it seem like I was having fun, and I was. For brief moments, I felt good and was able to forget about life. But when I was alone, especially on the weekends, I fell apart.

Depression doesn’t follow a schedule. It doesn’t “come back at a better time.” It knows no rules and no bounds. It grows like a weed; it grabs ahold of you and slowly chokes the life out of you. It forces you to see lies; it skews your view and hurts you in a variety of ways. Left untreated, it could kill you, simply by convincing you that you want to be dead. What I needed was a change. I needed to snap out of my funk, rewind, and correct some bad habits I allowed to accumulate.

The first bad habit I needed to break was not sharing my feelings.

I know I can come off as a bit of whiner. I’m prone to hypochondria, and I complain all the time. But while some of that is just superficial junk that’s hardly worth worrying about, a lot of it comes from sources of legitimate concern. I haven’t seen a therapist in months, and I know I need to get back to that. It’s a big help, really. (Word to the wise: If you’re transgender, don’t waste your time with a therapist who tries to convince you that you’re not trans, or that being trans is the root of your problem. Those types of therapists are called “gatekeepers” because they often play a role in deciding whether or not we get access to further health needs, such as hormone therapy. Find yourself another therapist immediately if this is what’s happening to you because you need to get to the real problems.)

The second bad habit was not exercising.

I was letting myself get soft. Over the month of October, I managed to put on 10 pounds of fat. The thing with hormone therapy – estrogen, especially – is that it tends to add extra layers of fat all over your body. We’re warned about this, although whether these fears are founded or merely just more gatekeeping, I’m not sure. All I know is, the fat around my belly was increasing at an astonishing rate. I wasn’t able to sit comfortably in an old pair of jeans, so I joined a gym. Not only am I looking forward to trimming down, but exercising releases endorphins that make you feel better. It’s been proven that people can actually get addicted to the positive feelings associated with an endorphin rush that comes from exercise – running, cycling, etc. Do some cardio; it’ll help your mood.

Of course, this all goes hand in hand with eating poorly, drinking alcohol to excess (which is another big no-no if you’re taking estrogen orally), and not being around positive, uplifting people who love me.

Only once I realized what was dragging me down was I able to pick myself back up. Life has a lot of pitfalls. There’s no one-size-fits-all solution, and if your depression gets especially bad, medical intervention may be necessary. As for me, I’m finally feeling like my life is back on track. I owe it to my friends for helping me out while I had to deal with this. Hopefully, it won’t happen again, but I try to keep in mind that I do still have depression – even when I’m not feeling it.

Remember: focus on the positive, forgive yourself, and let go of the past. Practice self-care, live your truth, and help those around you do the same.

If you’re feeling suicidal, or just desperately need a voice to talk to, a great number to keep handy is the Suicide Prevention Lifeline: 1-800-273-8255.

And, of course, the Trans LifeLine is an organization run by trans individuals for the prevention of suicide within the transgender community: 877-565-8860.

Keep them handy. Even if you never use them, someone you know may need them someday.

If you live in or near Wilkes Barre, every month starting in November, Heat will host Stella’s Second Saturday, with proceeds benefiting a rotation of local charities. Estella Sweet will be behind the bar serving up drinks and entertainment!

On Nov. 14, Stella’s first Second Saturday will benefit the local chapter of the American Foundation for Suicide Prevention. $5 gets you in the door, and every dollar for admission goes to the charity. There will be a cash bar, and The Wandering Chef will be serving food throughout the event.

Heat will open at 5 p.m. for the benefit and stay open for their regularly scheduled Heat features at 8 p.m. It is 21+, and an ID is required to drink.

And coming up next Friday, Scranton is having a Transgender Day of Remembrance candlelight vigil to remember those who have lost their lives this year. This will be Scranton’s first solemn candlelight vigil to say the names and honor the victims of homicide this past year who were murdered simply because they were transgender. Please join us on the Spruce Street side of Courthouse Square, rain or shine.

Share this event and, more importantly, attend to support the trans community in greater NEPA. That will be occurring at the Lackawanna County Courthouse on Nov. 20, beginning at 6 p.m.