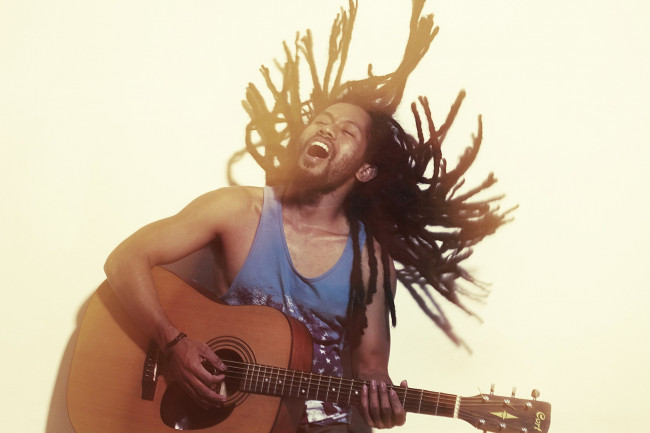 Many years ago, I remember standing on the side of the stage talking with a crew member of The Marshall Tucker Band; we were playing a radio-sponsored show with them at an outdoor venue. We were in the middle of our first tour as a major label act, and I was chatting with him about our experiences on the road. The guy listened to my tales of the ups and downs of trying to break as a “baby band” in this business. (Note: It took us seven years to reach “baby band” status.) After a while, the roadie pointed up at the sound check that was taking place onstage, and in his thick Southern accent, he said, “These guys are just happy to still be playing.”

When we got up there to do our check I wandered around their setup. The thing that struck me was a Hammond organ with pictures of the keyboardists’ children taped on the lid. I was moved by that for some reason. Things had certainly changed for these guys over the years, but they were still at it. Why? Because that was all they knew how to do? Partly, I was sure, but I had to believe they still enjoyed themselves. Later that night, they played an amazing set full of great songs and ripping guitar tones. I was impressed. A night full of joy…

Which brings me to this week’s topic – joy. I was watching Chris Matthews on “Hardball” the other night and he brought it up. He was speaking about how some of the political candidates were connecting more with their audiences because of what he called “the Old Testament concept of joy.” Issues aside, some candidates are just throwing better parties than the others. And everybody loves a good party. Yes, even being pissed off is fun if you do it with enough people. Mosh pit, anyone?

Anyway, back to the music.

As a band, it is easy to get too deep into what you are doing and forget this simple concept: If you are having a great time, chances are good everyone else will. And they will want to come again. And if they keep coming, you get to keep having more fun. For a long, long time.

I realize this falls under “no shit” to some people, but as any songwriter will tell you, a great “simple” song is the hardest to write. The simplest concepts are the toughest to implement. Anyone can wank away and write a complex track with so many sections that it would leave Frank Zappa confused. Anyone can stare at their shoes and complain when the audience walks out, then claim that the public just “didn’t get it” because they were stupid or shallow or whatever.

Any good baker will tell you that simple is the hardest thing to do correctly. And, if it’s not done with love, you ruin it. When Willy Wonka wasn’t happy anymore, his candy didn’t taste good either. And nobody wanted it. You cannot give away what you do not have.

Bands usually start out in a similar fashion. They get together and jam a little. They learn some songs and maybe write a few. They book a few shows and, if they are good, they start to get a response. Everyone is having a blast. And that is what brings the people out to see you. But, eventually, the honeymoon is over. The singer is a prima donna, the drummer is a drunk, one guitarist is lazy, and the other is paranoid. Or whatever the mix. You all know the drill.

Still, there are shows to do and money to be made, but you can’t help but feel your audience wondering what the hell happened. The joy of playing is just gone, and it shows at the gig.

I once read an interview with Bono where he said, “Hate is not the enemy of love. Apathy is.” I believe that to be true. Hate burns hot and can be turned into something positive. Brothers get into fistfights, then go back to being brothers. But once you stroll too far down Don’t Give a Shit Avenue, chances are good you will never be back.

Hanging on to the simple joy of what you are doing is a tall order, as simple as it sounds.

Years ago, Paul Smith and I were co-producing an artist (let’s call him Bob) at our studio. Bob was an older guy who always wanted to make a record. At the end of our sixth session, he got out his checkbook and paid us for the day. Then he wrote us another check. He said, “I see you guys are working here all the time. Here’s the fee for an extra day of studio time. Take the day off with your families. And, no matter what, never let anything come between you because what you have going on here is special.”

Joy. I have worked with so many bands that had it, then lost it. It happens so much it doesn’t even make me sad anymore. It has happened to me. And, with few exceptions, the better the band, the more problems there seem to be. To quote Bono again: “It’s one love / We get to share it / It leaves you baby / If you don’t care for it.”

A producer friend of mine once told me, “The first 90 percent of a project takes 10 percent of the time; the last 10 percent of the project takes the other 90 percent.” The closer you get to “great,” the harder the going is. The decisions get tougher and the disagreements get louder. It is easy to get along with someone when there is nothing at stake between you. It takes a special group of people to get through this, whether you win, lose, or sorta win.

As far as how to get there, I don’t have much of a remedy other than time.

The road to joy does not necessarily end back where you started. But it does lead an old man back to a young man’s dreams.