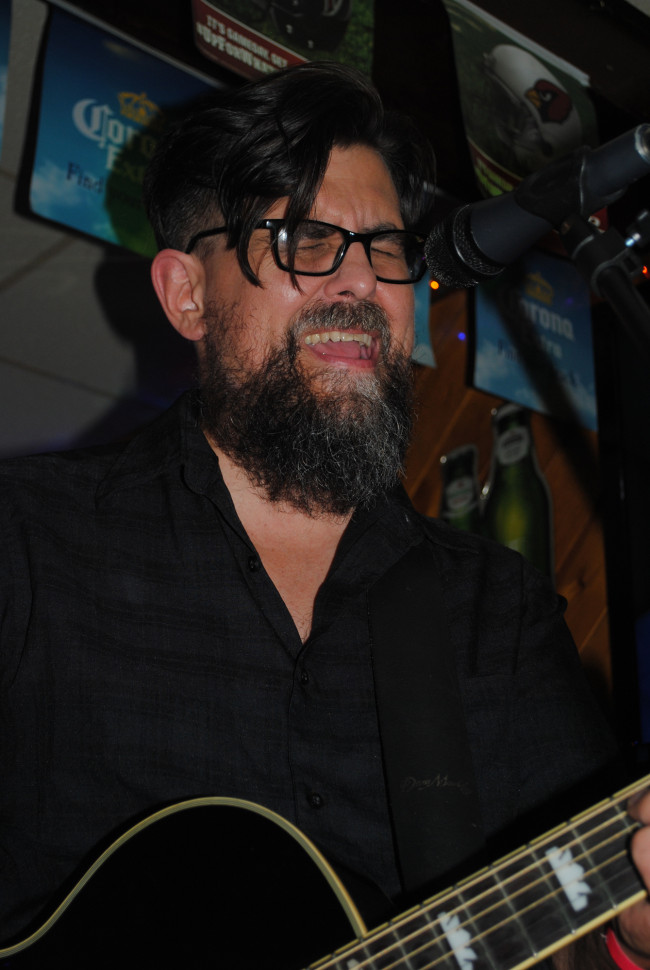 I’m going out on a limb today. This column is going to sound like I’m a self-help coach or motivational speaker. I’ve started to write this story a few times in the past and realized I was rolling my eyes at myself, so I stopped. But it keeps coming to mind, so I’m going to exercise this demon once and for all at the risk of sounding like a douchebag.

Less music than usual in today’s entry. But if you are a musician, it certainly relates.

I grew up in Canton, Pennsylvania. A small town of about 2,000 people in the North Central part of the state. My dad was a factory worker, and my mom was a teacher’s aide. A basic working class family. Canton was a great place to grow up but, predictably, there wasn’t much going on. It has one red light, and it’s about an hour to the nearest McDonald’s or movie theater. In fact, a trip to McDonald’s and a movie was a pretty big deal to us as kids.

I was somewhat unique because I got into music in my teens, but I was also into sports, so I mixed pretty well with the musicians and the jocks. That came completely natural to me. Springsteen’s sax player Clarence Clemons was also a musician/athlete, so I figured, “Why not?”

When it came time to graduate from high school, I had to decide where to go next. No one in my family had ever gone to college, and there were no musicians in my immediate family either. I was deep into jazz at the time, and I was studying with a guy who was a Berklee College of Music graduate. He helped me through the process, and I did an audition for the school. I got accepted. I wanted to go. Bad.

But, at the same time, I was doing well in sports, too, mainly football. I started getting scholarship offers from various schools – Brown, University of Pennsylvania, Bucknell University, etc. Lots of Division 1AA and Ivy League schools.

After much consideration (and a handful of threats from my father… something like, “If you don’t do this, I’m calling the Army recruiter”), I took a scholarship offer to play defensive end at Bucknell. For the next four years, that is pretty much what I did. I still played music in the summers and on the weekends, but rock and roll dreams were on the back burner for the time being. Sports paid for my education, so that was the drill – sports, school, sports, school. To be honest, sometimes it felt like 100 years to me.

Every person has a few “crucible” moments in their life that they keep going back to in their mind. I gave you all this backstory so I could properly set up one of mine, so here goes…

Me and a bunch of my football friends were in an early fall semester economics class our freshman year. We were a sorry sight, sitting in the back, bruised and tired from camp and daily practices. We were all working class kids whose parents probably couldn’t have afforded the meal plan at a school like this, let alone tuition but, somehow, we were there.

The subject of the day was “Social Darwinism.” Basically, “economic survival of the fittest.” The poor are poor because they are supposed to be poor. They didn’t apply themselves, so don’t help them. The rich are rich because they are further up the economic evolutionary scale. My friends and I sat there thinking, “What a crock of shit.” The professor wasn’t agreeing with the concept or disagreeing. He was just explaining the philosophy.

But, up in the front of the class, a young girl raised her hand. She said, “You know, that is really true. If these poor people would just apply themselves, they wouldn’t be in the condition they are in.”

Now, to say that to a bunch of working class kids who get pummeled every day to pay for their schooling, that’s something. That the only reason their other friends were left behind was because they are lazy? That’s the reason you were at a great school and they were not, because of economic natural selection? No, Susie Sorority with the Hilton Head tan, that is not the case. And, furthermore, do you have any idea how lucky you are?

My one buddy leaned over to me and said, “That is why I hate this place.”

It was official – I was a card carrying angry young man. There were many other instances. It took me decades to really put it all in perspective.

But, eventually, I did get it together. When I did make peace with the situation, what did I conclude? I concluded that your circumstances are a gift. They are an opportunity for you to learn something. They are a part of you. Failure and struggle are a hell of a lot better teachers than success and contentment. Nothing is ever easy. If you want something, go get it. Period. If along the way it’s not what you want anymore, stop and make changes. To use the old Thomas Edison philosophy, you now know something else that doesn’t work for you. Go after something new with the same passion.

For me, I started my music career as an engineer. Then I got pushed out of that. Then I got in a band and we got a record deal. Then we lost that. Then we got another one. Then we lost that too. Then we started a recording studio. That went well for a while, then I downsized that business when times got tough. Then I started back up again in a new location. Then I became a singer (in my mid 30s) and started performing solo. Along the way, I’ve formed a few bands and produced hundreds of recordings. I’ve gotten screwed more times than I remember. There have been many, many situations I thought were going to be a big break, and they fizzled into nothing at all. It continues to this day.

That’s a lot of hassle just to live a life of a middle class vocational musician, right?

You can call that character or mental toughness or whatever you want. Or just plain stupidity. I don’t know, but I can say that my life has always been happier fighting for an impossible dream instead of accepting a practical one. And sitting around angry doesn’t get you anywhere.

Circumstances are a gift, they really are. What you do with them is who you become. No one ever erected a statue of a guy who learned to live with his disappointments. The guy who had everything handed to him doesn’t get a lot of monuments dedicated to him either.

When our band was making our second major label album, we were starting to hear rumblings that our label was being sold. We were in the studio one day and I said to our producer Joe, “Wouldn’t it suck if we did all this work and this record never came out?” (P.S. It didn’t… not until much later and on a different label.)

He barely looked up from the console.

“I have a closet full of them,” he said and kept working.

Now I have a closet full of my own recordings like that. And my daughter just entered music school. The music business is one of the shittiest businesses on the planet. Am I going to tell her not to do it? Hell no. Passion, balls, and drive make life happen. Not an easy path with favorable conditions.

If you want something, it can be done. The right why can always find a how.

As I look out there at what’s going on in the social and political landscape right now, I always think of that classroom. The “haves” in the front and the “have nots who are trying to be haves” in the back, and I think that it’s not your circumstances that matter, it’s what you do with them. If you are in the back, do you spend your life sitting still, angry because that’s where you are? Blaming someone else and making sure everyone knows whose fault it is? Or do you get out there and fight for something better? If you are in the front, do you look down on the people behind you, or do you realize all your good fortune, reach back, and pull the others up?

This is the true test of adulthood, no matter what your vocation. No matter where you are in that classroom.

I like to think I made it up to the middle. Far enough to understand both sides at least a little. I’m still pissed off, but hopeful.

And I’m thankful for the journey so far.

Best wishes on yours, my friends.

STRENGTH & FOCUS: 5 tips to set and accomplish your New Year’s resolution in 2016