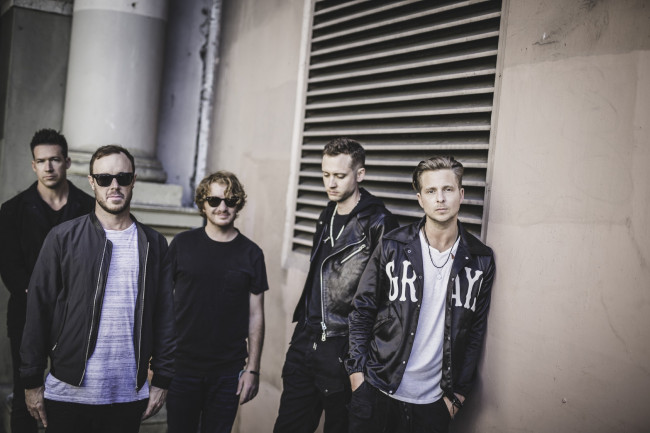 Local pop radio station 98.5 KRZ is bringing its annual Summer Smash concert back to The Pavilion at Montage Mountain in Scranton on Wednesday, July 26, this time featuring multi-platinum, Grammy-nominated quintet OneRepublic with special guests Fitz and the Tantrums and James Arthur.

Tickets, which range from $34.50 to $350 (VIP seating and parking), plus fees, are on sale now at livenation.com, ticketmaster.com, and all Ticketmaster outlets.

OneRepublic’s third studio album, “Native,”, was released in 2013 and produced the hit singles “If I Lose Myself,” “Feel Again,” “Love Runs Out,” “I Lived,” and their biggest song to date, “Counting Stars,” which reached No. 1 in 54 countries and has sold over 10 million downloads. “Native” sold over five million units worldwide.

Their newest album, “Oh My My,” featuring the hit singles “Wherever I Go,” “Kids,” and new single “Let’s Hurt Tonight,” was released in the fall of 2016 on Mosley/Interscope Records and debuted at No. 3 on the Billboard Top 200 Album chart. It included a number of high-profile collaborations, including Santigold, Peter Gabriel, and Cassius, marking the first time the band has collaborated with other artists. Vocalist Ryan Tedder is also a Grammy-winning songwriter and producer who has worked with such artists as Taylor Swift, Adele, Beyoncé, U2, Ellie Goulding, Maroon 5, and many others.

OneRepublic will join U2 on The Joshua Tree Tour on four dates in 2017 before kicking off the Honda Civic Tour this summer, which includes the 98.5 KRZ Summer Smash stop.

Los Angeles-based Fitz and the Tantrums have quickly grown from independent upstarts to bonafide hitmakers. Their current self-titled album, “Fitz and the Tantrums,” was released last summer on Elektra Records and features their biggest hit to date, “HandClap.” The RIAA-certified gold single has already gone Top 5 on both the Hot AC and Alternative Radio charts, and it’s currently ascending the Top 40 Radio charts. Fitz and The Tantrums’ eponymous album follows their breakout major label debut, 2013’s “More Than Just a Dream,” which featured back-to-back No. 1 Alternative Radio singles in the platinum hit “The Walker” and gold “Out of My League.” Both singles also enjoyed Top 15 success at Hot AC.

The band has performed countless sold-out headlining shows and is always a standout at music festivals around the world, including Coachella, Bonnaroo, Lollapalooza, and Austin City Limits. The band’s first full-length album, 2010’s “Pickin’ Up the Pieces” (released on indie label Dangerbird Records), spent 73 weeks on Billboard’s Heatseekers chart, peaking at No. 1.

James Arthur was crowned the winner of “The X Factor” U.K.’s ninth season in 2012. His debut single, “Impossible,” became the biggest “X Factor” winner’s song of all time, selling more than one million downloads and topping charts for several weeks. The buzz around the Middlesbrough-born singer was different to previous champions. He was regarded as the show’s first credible artist; Arthur not only possessed showman-like qualities with an incredible, distinctive voice, but he could back up his stage presence with natural song-writing ability.

Following two years away from the spotlight, Arthur returned last fall with his single “Say You Won’t Let Go.” The song shot straight to No. 1 in his native U.K., where it remained for three consecutive weeks. Last fall, he released his second album, entitled “Back from the Edge,” which again went straight to No. 1 in the U.K. “Say You Won’t Let Go” has topped iTunes charts in more than 20 countries and has since gone on to sell more than three million downloads, more than 350 million streams at Spotify, and a quarter of a billion total views on Vevo/YouTube around the globe.