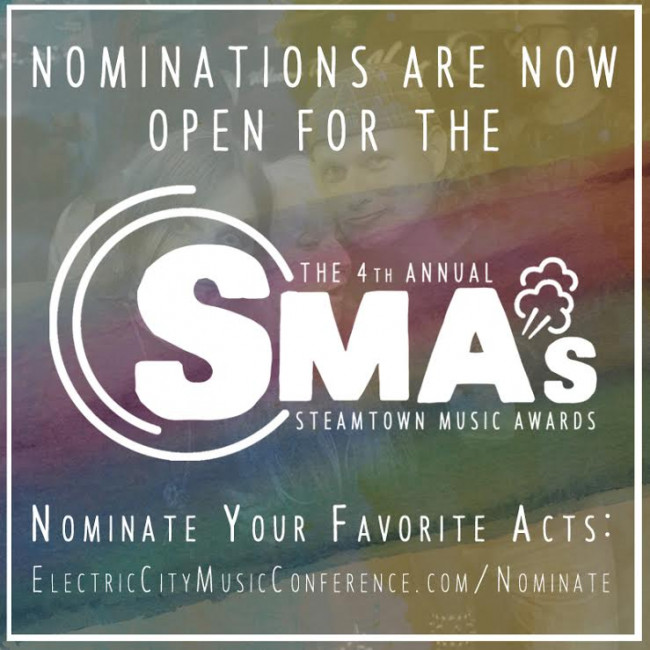 Nominations for the 2017 Steamtown Music Awards are open from now until Thursday, June 15. The public can nominate their favorite acts for the fourth annual local music awards ceremony, which will be held on Thursday, Sept. 14 and serve as the opening ceremony for the Electric City Music Conference.

Nominations will close on Friday, June 16, and online voting for the award categories that allow public voting will open shortly after that. Co-organizer Ken Norton noted, “We’ve always had difficulty with our online voting, and drama often erupts so, this year, we brought in an outside developer to assure security. Short of Russia hacking the voting system, we feel extremely confident in the fairness and security of the process.”

Local music industry professionals will vote on all other awards. Perhaps one of the largest announcements in regards to the 2017 Steamtown Music Awards is a massive change to the voting structure. In addition to the voting committee of local music industry professionals, all past award winners will be invited to cast their votes as well. However, these voters will not be allowed to cast a vote in any categories that they may be nominated in.

“As always, we’ve included influential members of the local music scene and infused the committee with a few national voters that have no ties to NEPA. We also feel as though past winners have earned the right to be part of this committee as well. A lot of thought went into this, and we think it’s the right move to take. They won’t be able to vote for themselves or anything associated with them, so we feel this gives the voting an additional level of fairness,” explained co-organizer Joe Caviston.

In 2017, the Steamtown Music Awards will be honoring the real heart of the music scene – the fans. The SMAs will be adding the NEPA Music Fan of the Year Award, honoring NEPA’s No. 1 music fan.

With the ever-changing musical landscape, the awards also want to be sure to recognize the various ways that music is being digested so, this year, the categories of Podcast of the Year and Live Stream Performer of the Year will also be honored.

NEPA Scene will once again serve as the official media sponsor of the Electric City Music Conference and the Steamtown Music Awards, so stay tuned to nepascene.com for more information concerning the 2017 local music award show.