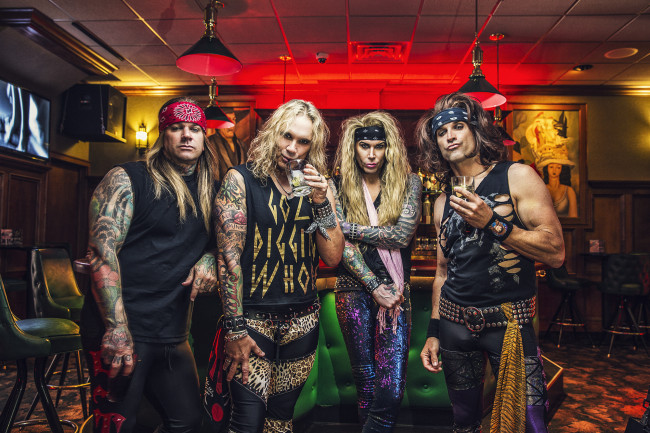 Glam metal parody band Steel Panther is bringing 1980s Los Angeles back to the Sherman Theater in Stroudsburg on Saturday, March 31 at 8 p.m. as part of their Sunset Strip Live Tour.

Tickets, which are $25 in advance or $28 the day of the show, go on sale this Friday, Feb. 9 at 10 a.m. and will be available through the Sherman Theater box office (524 Main St., Stroudsburg), online at shermantheater.com and ticketfly.com, and all Ticketmaster outlets. VIP boxes and sky boxes are available for this show and include eight tickets (VIP box) or 12 tickets (sky box), a fruit and cheese platter, and waitstaff. To purchase box seats, call the theater at 570-420-2808.

Hailing from Los Angeles, California – the epicenter for rock ‘n’ roll in all its debauchery and glamour – Steel Panther was formed in 2000 and is Michael Starr (lead singer), Satchel (guitarist), Lexxi Foxx (bass), and Stix Zadinia (drums). They have established themselves as the premier party band, melding hard rock virtuosity with parody and criminally good looks.

With five full-length albums, a decade of sold-out residencies, worldwide touring, platinum-level YouTube status, and such high-profile television appearances as “Dancing with the Stars,” “Fox NFL Sunday,” “Jimmy Kimmel Live,” “Larry King Now,” and some commercials, the band is touring once again after the release of their latest effort, “Lower the Bar.” Released last March to rave reviews, the album bowed at No. 40 on the Billboard Top 200 Album chart and garnered their fourth consecutive No. 1 on the Billboard Top Comedy Album chart.

Sunset Strip Live is a Steel Panther show that includes some of their biggest original songs, the biggest metal hits from the ’80s, and their trademark comedic delivery into the most high-energy party of your lifetime.

Of their last album, “All You Can Eat,” Rolling Stone avowed, “There’s a reason Steel Panther have transcended their origins as a cover band playing the Sunset Strip,” while Metal Sucks declared, “Steel Panther’s concept is genius … their songwriting is … preposterously snappy – and relatable.”