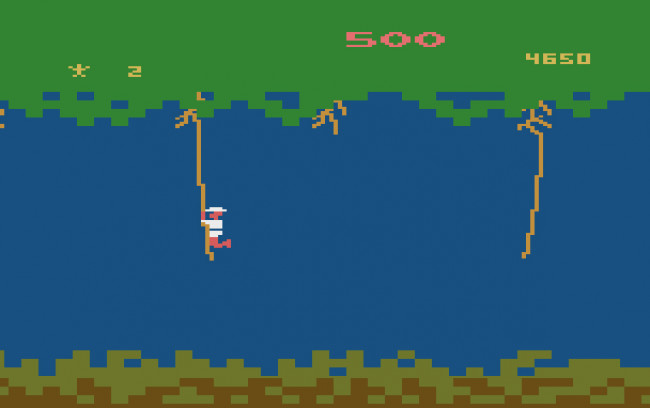 In the world of video games, sometimes things just don’t go according to plan and you need to be able to improvise to keep the ball rolling, as it were. This was especially the case for today’s topic for Turn to Channel 3’s “Atari August” – “Jungle Hunt!”

Initially called “Jungle Boy” and then “Jungle King” in the arcades, what would be ported to the Atari 2600 had a bare-chested man in a loincloth, complete with Tarzan yell, as its featured character. However that’s when the folks behind the estate of Edgar Rice Burroughs, creator of the Tarzan character, got legally involved, forcing video game developer Taito to change the main character to a pith helmet-wearing, rope (not vine) swinging adventurer initially called Pirate Pete in the arcades, for reasons no one will ever understand.

Luckily, when Atari ported the game to their 2600 console, the name “Jungle Hunt” was used. “Jungle Hunt” would go on to be ported to several consoles and home computers as well as compilation discs from the folks at Taito for the PlayStation 2 and original Xbox, but does “Jungle Hunt” stand the test of time?

Let’s swing on over and find out!

As is the case with many, if not most, Atari 2600 games, there isn’t much in the way of a soundtrack to this game. However, a little song that plays in spots, as well as some kind of tribal music that plays as you face off with the dreaded witch doctor, are things not every Atari 2600 game has, so that’s something.

In addition, sound effects for jumping onto ropes, swimming (while punching alligators because, you know, that’s what you do as a pith helmet-wearing adventurer), and rolling boulders help tell the tale of this bold man off to rescue the girl from the evil witch doctor. “Jungle Hunt” and games like it on the Atari 2600 had to do what they could with limitations in order to tell a story.

The level design isn’t too bad if you’re not expecting much – you still look like you’re in a jungle when you’re supposed to be, swimming underwater when the time comes, and like you must dodge boulders in order to reach your final goal. The characters in this game are quite basic and definitely stereotypical stuff for the time. As someone who creates pixel art, I don’t think it would be too difficult for me to recreate anything seen here.

Now don’t get me wrong – “Jungle Hunt” is indeed a blast to play, and it’s a big piece of my childhood and enjoying the Atari 2600. That being said, as an adult, I see how annoyingly repetitive this game gets.

Sure, you’re still going for a high score, and each run through the game gets a bit more difficult, but the fact that nothing is thrown into the pattern of jungle/underwater/boulders/witch doctor is a bit disappointing and definitely hurts the replay value of this title. Other than the act of punching alligators (or maybe crocodiles?), you don’t actually attack anything.

You progress through the game, for the most part, by simply jumping over things – including the witch doctor! I mean, even if they used the formula that Mario would master by jumping on the heads of enemies in relation to the final boss, I would find it a bit more fun even after a few rounds but, alas, this is not the case.

Wearing my rose-colored glasses of childhood, “Jungle Hunt” is one of my absolute favorite games on the Atari 2600. However, at 37, I realize that it can only truly be enjoyed in short spurts because, in a way, that’s what it was built for. This is the kind of rainy day game you can enjoy for a bit before moving onto something a little more extensive, whether on the Atari 2600 or another console all together.

For less than $5, you can have this game in your Atari 2600 collection easily, but don’t expect any long-lasting fun to be found in it.

Tune in next week as we leave the jungles for the world of criminals in “Keystone Kapers!”

Until then, stay cool and, as always, game on! 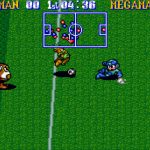