Tickets, which start at $42.35, go on sale this Friday, Oct. 25 at 10 a.m. and will only be available online at ticketmaster.com for the first day. After that, tickets can also be purchased at the Giant Center box office (550 Hersheypark Dr., Hershey).

New York City comic Jim Gaffigan is known around the world for his unique brand of clean humor, which largely revolves around his observations on life. He is one of only 10 comedians in history to sell out the famed Madison Square Garden arena, and he performed for over one million people at the Festival of Families during Pope Francis’ visit to Philadelphia in 2015.

On the silver screen, his many credits include “Three Kings,” “Super Troopers” and “Super Troopers 2,” and “Chappaquiddick.” 2019 is Gaffigan’s biggest year to date with seven films scheduled for release. Three of these movies premiered at the Sundance Film Festival, including “Troop Zero” with Viola Davis and Alison Janney, “Them That Follow,” and “Light from Light,” with many festivalgoers calling Gaffigan the “King of Sundance.”

He is also the lead in a comedic film called “Being Frank,” which opened Father’s Day weekend, and “American Dreamer,” a dark thriller that features him as an ride share driver who moonlights as a private driver for a drug dealer. In April, Gaffigan was seen alongside Alec Baldwin and Salma Hayek in Bron Studios’ “Drunk Parents.”

On Aug. 16, Gaffigan recently released his unprecedented seventh stand-up special, “Quality Time,” on Amazon Prime, making history as Amazon’s first original comedy special. The 53-year-old is in top form, talking about why we aren’t more honest about the reasons we don’t want to attend events while at the same time embracing lying to kids. From horses and dog birthdays to traveling and museums, he continues to impress.

Gaffigan regularly does humorous commentaries on CBS Sunday and served as the master of ceremonies at the Al Smith memorial dinner. He was named one of the world’s highest grossing comedians by Forbes, and streaming site Pandora announced Gaffigan as their most popular comic with over 647 million spins to date. 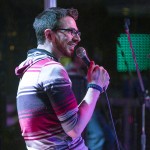