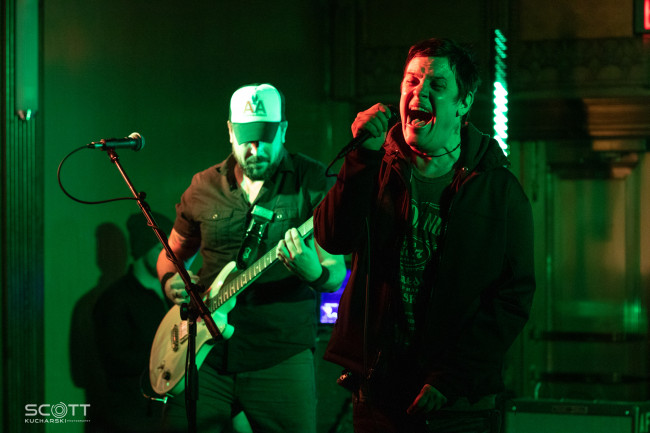 Since reuniting for the first time in eight years in 2018 (and only the second time since breaking up in 2003), Wilkes-Barre hard rock band Lifer has surprised local music fans by jumping from the nu metal era to the present with a handful of concerts, including “A Not-So-Silent Night” Christmas show last December at the former the Voodoo Lounge in Luzerne, a hotspot of the local music scene during the band’s heyday.

Doors at Stage West (301 N. Main Ave., Scranton) open at 8 p.m. Tickets, which are $15, are on sale now via Eventbrite. Hazleton active rock radio station 97.9X will also be giving away a pair of tickets every day during the week leading up to the show.

With singer Nick Coyle busy this year as the guitarist and backing vocalist of Cold, recording an album and touring the country with the gold-selling alternative rock band, Lifer only played one other concert in 2019. The group – currently made up of Coyle, Aaron Fink (guitar), Tony Kruszka (drums), and Mike Morgan (bass) – headlined a benefit show for the Howells family organized by NEPA Scene at the F.M. Kirby Center in Wilkes-Barre on Jan. 18, where they played their first new song in about 17 years, appropriately titled “The Start of Something New” (or simply “Something New”), for only the second time live – the first was at the inaugural “Not-So-Silent Night.”

University Drive has also spent the last few months with Cold and Awake for Days on the Broken Human Tour, so this will be their first hometown show since they opened for Cold at Levels Bar & Grill on Sept. 1. University Drive recently wrapped up their leg of the tour at the legendary Viper Room on the Sunset Strip in West Hollywood, California on Nov. 5 and 6.

Originally known as Strangers with Candy when they formed in 1999, Lifer – vocalist Nick Coyle, guitarist Aaron Fink, bassist Mark Klepaski, drummer Chris Lightcap, and Tony Kruszka on the turntables – quickly made a name for themselves in Northeastern Pennsylvania with their popular “No Need” EP, and once they entered MTV’s “Ultimate Cover Band Contest” in 2000 and won with covers of “Guerrilla Radio,” “Jump Around,” “Take on Me,” and “Nookie,” they became famous across the country virtually overnight.

“That was a huge stepping stone for me, like I couldn’t have predicted. Locally, we had a nice following around Wilkes-Barre/Scranton, and we actually played the Jersey Shore quite a bit. And we were playing a club in New Jersey and some MTV scouts were at the show,” Fink recalled in Episode 3 of the NEPA Scene Podcast.

Fink and Klepaski left Lifer to join Breaking Benjamin, who blew up soon after, becoming a multi-platinum sensation starting with the hit single “Polyamorous” in 2002. Derek Spencer and Ian Wiseman came in to replace them, and Lifer independently recorded an EP before changing their name to myDownfall and breaking up in 2003.

Coyle since formed The Drama Club, Stardog Champion with Fink, a solo project called Electracoustica, and indie/alternative rock band Death Valley Dreams before joining up with Cold in 2017. Fink moved on as a solo artist and is now on his fourth album as a singer/songwriter, playing live as the frontman of Aaron Fink & the Fury as well as the guitarist of local rock band Gentleman East.

The original lineup of Lifer only reunited once in 2010, playing a full-band acoustic show for a benefit in Berwick, though Kruszka filled in for Lightcap on drums.

But on Aug. 24, 2018, just over eight years later, Coyle, Fink, and Kruszka – joined by Mike Morgan of The Drama Club and Pan.a.ce.a on bass – played a half acoustic, half electric reunion show that quickly sold out Bart & Urby’s in Wilkes-Barre, prompting the group to book bigger concerts at the Scranton Iron Furnaces and the Sunbury Social Club.

In their first interview since reforming, Coyle and Fink said in Episode 76 of the NEPA Scene Podcast that they are open to recording new material after all these years, so with active social media accounts and at least one new song, it seems that this once short-lived project has been given new life that will continue into 2020.

See NEPA Scene’s review and photos of their first 2018 reunion here, photos from their 2019 concert here, and watch the full episode of the NEPA Scene Podcast, where they discuss their formation and early connections to Breaking Benjamin, the burgeoning local music scene at the time, their big break on MTV, Lifer’s breakup and later reformation as Stardog Champion, revisiting Lifer’s music all these years later, their successful reunion show, and more, below: