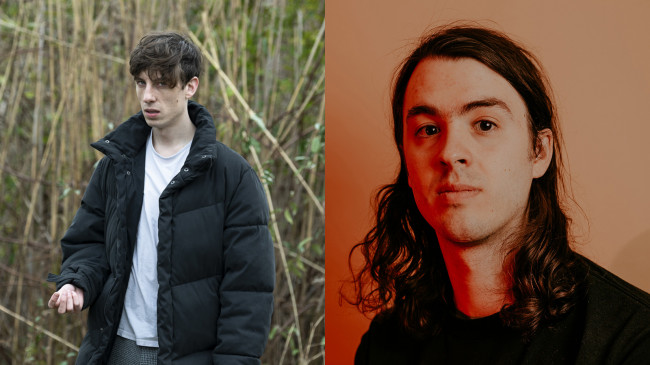 Two musicians known for starting influential breakout bands from Northeastern Pennsylvania embarked on a North American tour with their current solo projects last week, and they have since added a hometown area show for local fans of their experimental, avant-garde rock and hip-hop music just after Christmas.

Wilkes-Barre singer/songwriter Fantasy Camp, who released a mixtape with Wicca Phase, will open the all-ages show with Firewalker and Acupuncture.

Tickets, which are $12 in advance or $15 the day of the show, are on sale now via Eventbrite.

Russin headlined a show as Glitterer at Karl Hall (57B N. Main St., Wilkes-Barre) on Aug. 15, about a month after the release of his debut full-length album, “Looking Through the Shades,” on Anti- Records.

Wicca Phase Springs Eternal is the creative persona of Scranton singer, songwriter, producer, and multi-instrumentalist Adam McIlwee. Stark transmissions of obsession, melancholia, and raw emotion compliment acoustic guitar and digital percussion as if Peter Murphy and Metro Boomin had been playing Ouija together. Beneath the deep 808s, moody synthesizers, and cackling guitar, McIlwee’s singular voice effectively resonates with a generation raised amidst the frenzied collage of modern digital expression.

Wicca Phase first materialized in 2010. After receiving the name suggestion in an e-mail from a friend on Tumblr, McIlwee began writing and recording under the moniker.

“Once I heard the name, it felt perfect,” he explained. Evoking mystical, occult resonances, the name serves as a passageway to explore the parallels between the material world and that of mystery.

“My music is very representative of what I’m doing in the moment,” he continued. “The influence of the name seeps in and lets everyone know they’re getting into something deeper.”

McIlwee’s innate songwriting gift can be traced back to his time as the co-founder of Scranton indie rock band Tigers Jaw, the widely popular band he fronted before walking away in 2013 to fully embark onto new creative pathways.

“I was super active on Tumblr at the time and came across all of this early Internet rap. It was inspiring.” He sought more fervently the immediacy of writing, recording, and releasing songs instantly, releasing music from his bedroom with no consideration for the industries standard protocol.

As he continued to evolve in his new artistic endeavors, he ultimately linked up with like-minded creatives by way of Twitter DMs. Together, he and his newfound collaborators built a network of creators across the country and, in 2015, Wicca Phase Springs Eternal co-founded Gothboiclique (GBC). Comprised of 10 artists, including Cold Hart, Horse Head, Lil Tracy, and eventually the late Lil Peep, the Internet collective began creating a palpable buzz and accordingly influencing a growing wave of artists and musicians.

“GBC is really rooted in the spirit of loner culture and heartbreak culture,” he elaborated. “There’s this dark element that’s always been a part of American gothic music, the aesthetic, and the subculture.”

With GBC’s growing notoriety, Wicca Phase Springs Eternal simultaneously established himself as a singular voice, adeptly combining his natural songwriting instincts with the digital culture enveloping his world. Through an extensive catalog of collaborations, singles, EPs, and 2016’s “Secret Boy” LP, McIlwee has become a celebrated pioneer in this vital new direction of underground music. Along the way, he assembled what would become his 2019 Run for Cover Records debut, “Suffer On,” with the sonic bedrock evolving yet again as he re-embraces an initial vision.

Produced by Døves, Will Yip, and McIlwee with cover artwork by current Tigers Jaw vocalist/keyboardist Brianna Collins, “Suffer On” is an exploration of familiar forms through the lens of something new and extraordinary. It is the first Wicca Phase record fully written by McIlwee, utilizing guitars and keyboards to create each song’s core and building upwards from there.

“It’s so much easier to write more impactful songs when you’re doing it from scratch,” he explained. “You create the journey for listeners as opposed to getting a map from a producer and trying to fit what you’re saying onto it. It’s all coming from me.”

On the first single, “Just One Thing,” fearless percussion reconditions his vulnerable and vital delivery. He croons, “To think that I’m alone is like my worst fear / I want you right here.”

Themes of longing, entrapment, and sacrifice permeate the album – the notion of wanting more and not getting it. Production and lyrics are both intentionally sparse and bleak, reinforcing such feelings and allowing room for the weighty moods to fill the sonic void.

Lush acoustic guitar underscores the heavy emotionality of “Crushed” as he dissects a “natural anxiety about everything.” Then, there’s “Put Me in Graves.” Ethereal synths shimmer above double-time drums as his cadence wavers between frenetic and danceable.

“Suffer On’s” title track encapsulates the delicate sorrow at the record’s heart over a haunting timbre.

“It’s about making a deal with the devil,” he said. “It’s saying I can pursue this artistic thing as a career, but the consequence is I’m going to put myself out there in an emotional state for everybody to consume.”

But it was never really a choice which path to follow – like all great songwriters, McIlwee is driven by the innate urge to express himself through song. And in the end, “Suffer On” emanates its own magic stemming from its creator.

Ned Russin branched out in a very different direction in August of 2017 when the eponymous “Glitterer” EP appeared on Bandcamp. To some, Glitterer seemed to manifest the parallel identity, something between an alter-ego and a superego, of Russin, who wrote, sang, and played every note of the EP’s eight songs. The 29-year-old is now a New Yorker after making his name in the Wilkes-Barre music scene and around the world as a member of Title Fight.

Hence “Looking Through the Shades,” Glitterer’s full-length debut. Recorded in the cozy carpeted basement of the Russin family home in Kingston and co-produced by indie rock prodigy Alexander Giannascoli and Arthur Rizk (Code Orange, Power Trip, Sumerlands, the 2018 Grammy Awards), the album due out July 12 not only contains Glitterer’s best-yet sonics and songs, it has been constructed in such a way as to evince a spirit – co-operative, semi-schizophrenic, greater than the sum of its parts – that is proper to rock bands and inaccessible to even the least self-involved SoundCloud rappers and bedroom artists.

Glitterer was born in 2017 and now, with “Looking Through the Shades,” Gitterer has come of age.

Learn more about Glitterer in an interview with Russin in Episode 116 of the NEPA Scene Podcast: