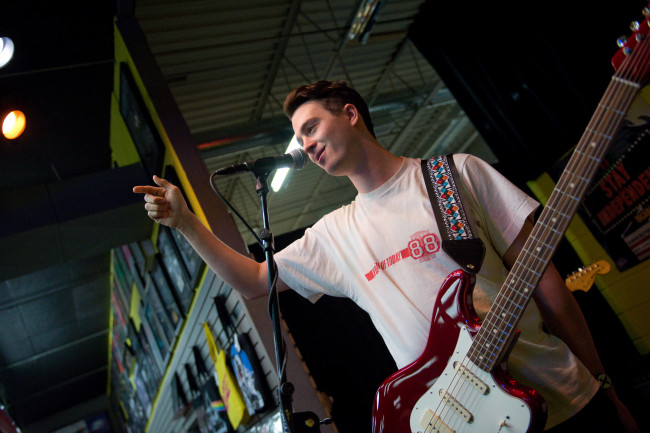 Lots of interesting new acts and side projects pepper this week’s roundup, along with music videos, album releases, and hours of eclectic songs to stream. Put down whatever you’re doing and start now!

♫ Wilkes-Barre alternative rock band Down to Six released their excellent new album, “All We Are,” in July (along with a trippy animated music video for the title track that features singer/songwriter and former Breaking Benjamin guitarist Aaron Fink), and now the digital version of their first full-length record since 2014’s “Atlantic” is on Bandcamp, Spotify, iTunes, Amazon, and other digital retailers. “This was a labor of love and an experiment of sorts, featuring guest appearances from Aaron Fink and Ed Cuozzo of University Drive, recorded, mixed, and mastered at the wonderful SI Studios [in Old Forge],” the band wrote on Facebook. Their next live show is at The Range (119 E. State St., Ithaca, NY) with The New York Rock on Saturday, Sept. 16 at 9 p.m.:

♫ As he finishes working on a new album with Cold after joining the gold-selling alternative rock band as a guitarist earlier this year, Berwick singer, songwriter, and composer Nick Coyle has also been working on his own solo material, releasing a new song in June as well as another new track, “Witness,” on Aug. 4 with a striking music video using scenes from the animated short “Caldera” by Evan Viera. The song is available as a “pay what you want” download on Bandcamp and can be found on Spotify, iTunes, Apple Music, and Google Play:

♫ Shavertown metalcore band Toothless gets tangled up in red strings in their new music video for “Red,” created by local Tunefly developer Sam O’Connell, and debuted it through the music app on July 28. Now, the video for the title track of their upcoming EP can be watched on YouTube, and the song can be downloaded for free (or you can name your own price) via Bandcamp:

♫ Following their full-length debut album, “The Gamble of Life,” on Nov. 26, Scranton metal band Traverse the Abyss released a brutal new single, “Dead Weight,” on Aug. 8, along with a black-and-white music video made by Michael Belardi, Stephen Reuther, and Jeremy Patrick Saltry at TwentyFiveEight Studios in Scranton:

♫ Two weeks ago, we told you about a new alternative rock band from Scranton, Winola, as they put out their first song – since then, the full album was released on Aug. 9. The self-titled debut is eight tracks featuring Rob Palmitessa on guitar and vocals and Chris Langan on drums. Langan was recently featured in Episode 16 of the NEPA Scene Podcast:

♫ The multi-talented multi-instrumentalist Jänson Harris, who plays in Wilkes-Barre psychedelic groove rock band Mind Choir, also has a cool solo project of video game-style instrumental music called Dimension 9. Travel to another world with his latest track, “Xyliallian,” where he’s behind the guitar, bass, keyboards, violin, and drum programming. It just came out on Aug. 15, and he’s already working on the next one:

♫ Speaking of Mind Choir, we caught their closing set at The Bad Trip Psychedelic Show at the Irish Wolf Pub in downtown Scranton on Saturday, Aug. 12, and it blew our minds. They’re set to drop a new single, “Glow,” on Aug. 22 before their next album, “Altered Images,” is released at a show with Spur and Under the Clothesline at the River Street Jazz Cafe (667 N. River St., Plains) on Saturday, Sept. 16 at 8 p.m.:

♫ Moosic solo rocker Joe Craig, a regular performer at NEPA Scene’s Got Talent and other NEPA Scene-hosted events, put out his newset album, “Deeper in Darkness,” on July 27, which can be purchased on ReverbNation and CD Baby now: