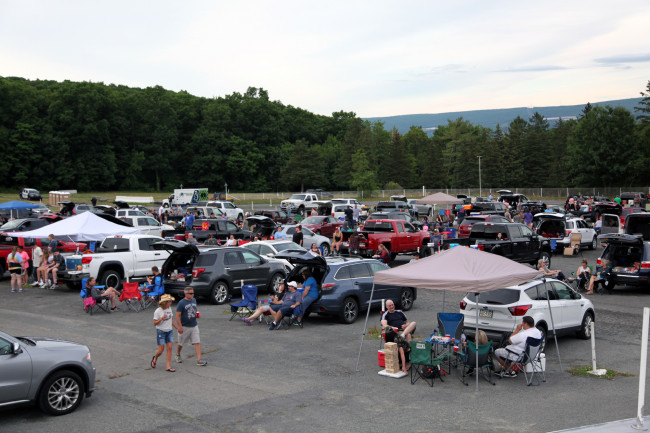 Fans attending the Mohegan Sun Arena’s “Drive-In Live Concert Series” with Almost Queen and Jim Gaffigan will be able to “Break Free” from their vehicles.

After consulting with local authorities, the staff at the Mohegan Sun Arena at Casey Plaza in Wilkes-Barre Township announced today that guests in attendance for the live performances hosted in the arena’s parking lot will be able to occupy the parking space adjacent to their vehicle and enjoy the shows from outside of their car.

A maximum of four occupants are permitted in each vehicle, meaning no more than four patrons will be allowed inside any one tailgating space. While masks are not required in these designated spaces, they must be worn by any and all patrons traveling to and from portable restrooms and concessions areas. All mask and social distancing policies will be strictly enforced.

Mohegan Sun Arena will host Almost Queen, a tribute to the legendary rock band Queen, on Friday, July 17 and Grammy-nominated comedian Jim Gaffigan on Saturday, July 18. Both events will feature live in-person performances from a 40-foot outdoor stage near the venue’s East Gate equipped with lighting, video production, and audio amplification. The start time is 8 p.m. for both shows, with gates opening two hours prior.

A ticket for each event includes a parking space for the vehicle, along with the adjacent parking space. All tickets are general admission and are first-come, first-served. A limited number of Gold and Silver Circle spaces are available for each event that provide an optimal view of the event stage. Tickets are currently available online via ticketmaster.com or in person at the recently reopened NBT Bank Box Office at Mohegan Sun Arena (255 Highland Park Blvd., Wilkes-Barre) on Tuesdays and Thursdays from 10 a.m.-2 p.m. (subject to change).

State guidance on social distancing, public gatherings, and certain procedures and practices is subject to change. The Mohegan Sun Arena will keep customers informed of changes as they pertain to these events at mohegansunarenapa.com. For a list of frequently asked questions as it pertains to this event, visit mohegansunarenapa.com/events/drivein.