From a press release: Four-time Grammy Award winner Keith Urban has set the summer of 2022 for the North American debut of his first world tour in four years, The Speed of Now Tour. Its newly announced North American leg, with three-time Grammy nominee Ingrid Andress, will add 50 shows to the previously announced concerts […]

From a press release: Nu metal band Limp Bizkit, whose hits like “Nookie,” “Break Stuff,” “Re-Arranged,” “Rollin’,” “My Way,” “Counterfeit,” and “Faith” helped them sell millions of records since the late ’90s, will get back on the road in April for their month-long Still Sucks Tour, which stops at the Mohegan Sun Arena at Casey […]

From a press release: After wrapping a successful and uninterrupted fall 2021 tour, Rock and Roll Hall of Famer Alice Cooper recently announced a run of January and February tour dates ahead of a headlining appearance on the Monsters of Rock Cruise in February. Today, Cooper has confirmed a slate of new spring dates, kicking […] 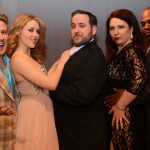