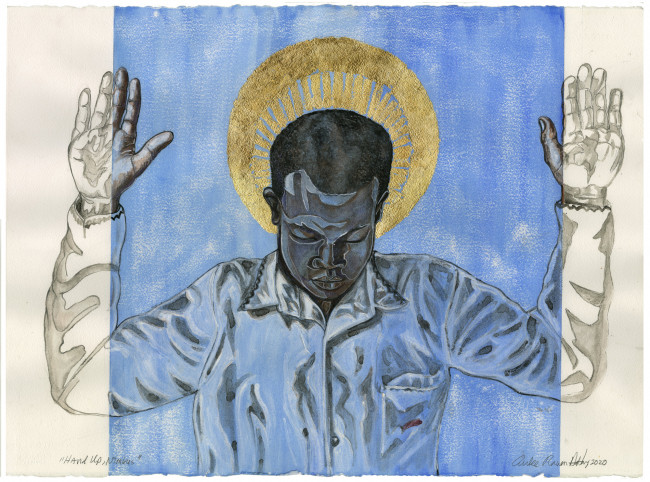 Misericordia University in Dallas is currently hosting an exhibition titled “The Fine Print,” which highlights the experimental styles of contemporary African American printmakers, in the Pauly Friedman Art Gallery until Sunday, March 14.

Holton’s piece titled “Hands Up, Nimbus” is pictured above. Prints can be purchased here.

“The work was created as a tribute to young black men. There is a trace of my own blood at the lower corner of the shirt’s pocket. This denotes the residue of violence seen and unseen. The golden halo represents the honoring of the subject’s value. Before halos were religious symbols, they represented heroism and valor as well as the unique value of each individual. The primary image is done in watercolor, with the hands in gray with white space. This segmentation of the image refers to barriers that perpetuate black vs white encounters,” he said.

Due to the coronavirus pandemic, the Pauly Friedman Art Gallery on campus (301 Lake St., Dallas) is closed to the general public. To schedule a private viewing, visit misericordia.edu or call 570-674-6250.

In lieu of in-person gatherings, the gallery is hosting various virtual events showcasing 29 works that capture excellence and innovation in American art throughout the exhibit in conjunction with Misericordia’s celebrations of Black History Month and Women’s History Month.

On Tuesday, Feb. 23 at 7 p.m., artists from the exhibition will participate in a Virtual Artists Studio Tour. In this live conversation, audiences will have a chance to chat with the artists about their work and about collecting works by African American artists. Feedback and questions asked during the virtual event will be considered as the gallery chooses one of the exhibition’s works to be added to the university’s permanent collection. Registration for this Zoom event can be found here.

Set on Chicago’s South Side, the plot revolves around the divergent dreams and conflicts within three generations of the Younger family: son Walter Lee, his wife Ruth, his sister Beneatha, his son Travis, and matriarch Lena. When her deceased husband’s insurance money comes through, Mama Lena dreams of moving to a new home and a better neighborhood in Chicago. Walter Lee, a chauffeur, has other plans – buying a liquor store and being his own man. Beneatha dreams of medical school. The tensions and prejudice they face form this seminal American drama. The Younger family’s heroic struggle to retain dignity in a harsh and changing world is a searing and timeless document of hope and inspiration.

The cast will feature local students and community actors. Misericordia’s own Dr. Richard Hancuff will present a brief introduction on racial equity in housing. This event is being held in partnership with the Misericordia University Players and the Gaslight Theatre Company of Wilkes-Barre.

Founded by the Sisters of Mercy in 1924, Misericordia University is Luzerne County’s first four-year college and offers 56 academic programs on the graduate and undergraduate levels in full and part-time formats. Misericordia ranks in the “National Universities” category of U.S. News and World Report’s 2020 edition of Best Colleges. The Princeton Review recognizes Misericordia as a 2020 “Best Northeastern” college, and Money Magazine includes Misericordia in its 2020-21 “Best Colleges” list. College Consensus and the Wall Street Journal and Times Higher Education rank Misericordia among the top colleges and universities nationally. 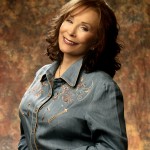 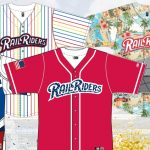 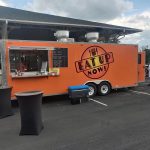