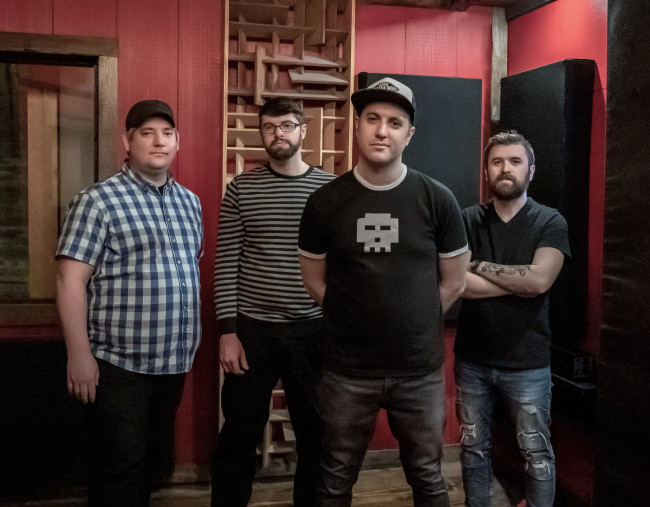 The new album from Don’t Panic may be called “Dark Horse,” but it’s a safe bet that this power pop/punk rock band from Stroudsburg will earn a lot of new fans as the summer comes to a close and fall begins.

“I have always felt – and still feel – like I was on the outside looking in, especially when it came to the music scene. Never felt included no matter how hard I fought to be, so I had to carve my own path and create my own opportunities for myself and our musical career. A dark horse is someone who is unknown and not expected to win or succeed but invariably does in the end. That’s how I like to think of our ‘little band that could,'” vocalist/guitarist Ted Felicetti shared in a recent interview with NEPA Scene.

That independent engine will be running up and down the East Coast over the next two months opening for The Queers, Bowling for Soup, and Year of the Fist, ending with an Oct. 30 performance at The Fest 19 in Gainesville, Florida with Hot Water Music, Frank Turner, The Lawrence Arms, Murder by Death, Chuck Ragan, and many more.

Before that fateful journey begins, though, they’re playing a hometown record release show at the Sherman Theater (524 Main St., Stroudsburg) on Saturday, Aug. 28 with fellow Northeastern Pennsylvania bands Head Spell, The Fading Season, and The Maguas. Tickets are on sale now via shermantheater.com and Etix, and those who don’t feel comfortable in large crowds with COVID-19 still prevalent can watch the live stream on Veeps.

The rest of the general public can pick up “Dark Horse” when it is officially released on Friday, Sept. 3; those who pre-order it online will receive an exclusive 13th track.

When comparing this sophomore effort to their debut LP, “See Through It All,” Felicetti said, “This one is much better,” with a laugh.

“I think the biggest difference was our first full-length was a mix of all material we had written through several years of playing, as well as some new songs we started writing once we came back from our hiatus. And it was us trying to find and identify the sound we wanted to put out there. Now we know what that is, and ‘Dark Horse’ is a coherent compilation of that. It feels like a fully realized band and sound this time.”

Even before their first album was released on Nov. 27, 2020, he began writing this one.

“I initially started writing new songs back in September of last year. I was working on writing some songs for my brother’s band [Bowling for Soup] when they were going into the studio to work on their new record and that kind of got the ball rolling for me. I started with one. Then another. And eventually I had 20 song ideas all tracked in my little home basement studio. My process is different for each song, for sure. Usually all of my best ideas come when I am in the shower, though. No distractions, ya know? I’ll hum an idea or a line or a guitar riff. Then, when I have a moment, I’ll grab my phone and hit record and sing it. Then I will come back to it later with my guitar and track that idea and build off it,” he recalled.

“Our first album was mostly about me coming to terms with my feelings of inadequacies and self-doubts in regards to making music again. This one has certainly come from a much more centered place. I got to kind of really dig in and write some songs about looking forward, a little more optimistic. But there’s of course the occasional song about a bad relationship or friendship, or about losing a friend to depression. There’s even a song about ‘Twin Peaks’ on the album, so it’s kind of all over thematically.”

Thankfully, his band members – bassist Keith Slader, guitarist AJ Larsen, and drummer Anthony Paesano – all live close to each other, so they were able to trust each other to stay safe during the pandemic and get together when needed to develop the new music and record at Soundmine Recording Studio in East Stroudsburg, where they also played a live streaming fundraiser for MusiCares, a nonprofit that helped fellow musicians who lost income due to COVID.

“I maintain Soundmine is the best studio around. Everything sounds amazing coming out of there,” Felicetti emphasized. They were then able to perform for Ionic Development’s streaming Juicebox Sessions series in Scranton a few months later, a company they teamed up with before to make some fun music videos.

“We have been blessed to have an amazing crew of people we collaborate with who have made [the live streams] possible in the first place. It was paramount above all else that it looked and sounded top-notch, which I am glad to say I think it did. In general, we had a fun time doing them. However, nothing compares to playing to a crowd of people and drawing energy from them. It’s an irreplaceable experience.”

That’s why they’re “super excited” to get back on the road with The Queers next month.

“They are pioneers of that Lookout Records kind of pop punk sound from the ’80s, so it’s a big honor. I’ve been friends with Joe [Queer], their singer, for the past six or so years, who I met through my friends in The Ataris. When he heard I started getting back into making music and touring, he invited us to come do some shows with them. Who are we to refuse?” Felicetti said.

“As for Bowling for Soup, those guys are our family, literally and figuratively. My brother Rob [Felicetti] is the bass player. But Jaret [Reddick], their singer, is like an older brother to me and has been mentoring our band since we started it up in 2019. I love all of those guys and spending time with them. We can’t wait till the end of the summer when we get to spend a week with those dudes playing in the northeast.”

It all starts back home in Stroudsburg, where they may feel like outsiders now, but in another year, many locals may claim that they followed the band all along.

“The guys at the Sherman Theater are great, and we are super thankful they wanted to host our record release show there. We plan on playing the new album in its entirety as well as people’s favorite songs from our last record, so a nice healthy set. We will be selling vinyls and CDs a week before its release there as well for any early birds,” Felicetti left off.

“This is going to be a great year for our band, and even though the last 15 months have been a huge challenge for us all, I think it will make all of us appreciate the next 15 even that much more.”

Read the full interview here and learn more about the band and Felicetti in Episode 131 of the NEPA Scene Podcast: