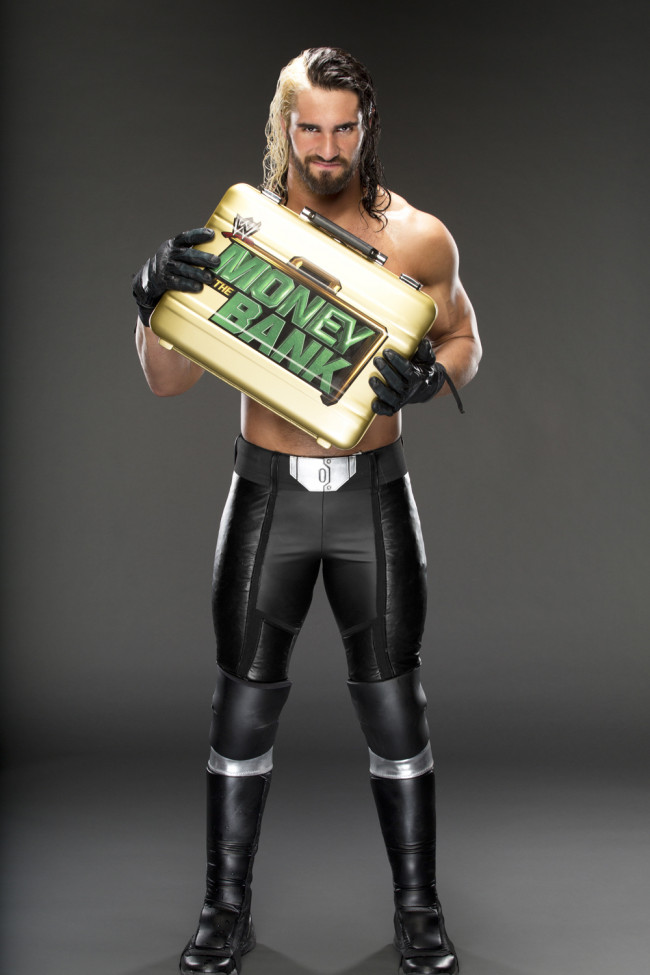 It was just scraping 24 hours since smashing his former teammate’s head into a pile of cinder blocks on live TV when we caught up with World Wrestling Entertainment Superstar Seth Rollins on the phone, and the athlete hadn’t lost any sense of pride in his actions.

“Things were heating up, but I kind of cooled them down last night,” he said when asked if the antics between he and Dean Ambrose (the aforementioned injured) that had been coming to a head had really reached its peak yet.

“I don’t know if you were watching Raw last night, but… I don’t think he’s going to be around to incite any more craziness any time soon.”

His voice is that of an almost taunting nature, as if he’s daring Ambrose to even attempt to refute what he’s saying. This, however, is Rollins – The Architect, Mr. Money in the Bank, the manipulative man who recently took a turn to the dark side and had a smirk plastered on his face the entire time.

Rollins (real name Colby Lopez) may be considered a “character” on TV, but what you see truly is what you get from the 6’1”, blonde-streaked wrestler.

“I don’t know if creative control is the best way to describe it,” he said, speaking on how much input he has on his WWE persona.

He holds onto the smartass lilt the entire conversation, breaking only once into laughter when questioned as to how he makes his hair look so wet. (“A bit of water, a good bit of conditioner, and at the end of the match, some sweat, too. You put all three of those together, it’s a recipe for the wettest hair imaginable.”)

Rollins began wrestling in the Scott County Wrestling circuit in 2003, working his way through several other organizations until August of 2010, when he signed with WWE. He gained momentum in the company’s developmental territory, Florida Championship Wrestling (FCW), but his part as one-third of The Shield (other members being Roman Reigns and Ambrose) is what pushed him into favorite territory for many fans. The trio beat down the bad guys of the business – until the night Rollins became a bad guy himself.

In a move that no one saw coming, he put a steel chair into the back of Reigns, and there came his heel turn. It was obvious from the crowd’s reaction that it was a true shock, and Rollins acknowledged the risk of such a career move.

It’s certainly panning out for him. Not long after his turn as a bad guy, Rollins went on to win the coveted Money in the Bank briefcase, which contains a contract for a shot at the World Championship belt at any time over the course of the next 12 months. That title is currently held by the monstrous Brock Lesnar, a mountain of a man who swatted fan favorite John Cena down like a fly to get the belt in the first place – but Rollins could not care less who holds the title.

“I never intended on cashing in the Money in the Bank briefcase, the contract for the WWE World Heavyweight Championship, on a completely healthy individual who is well aware I’m about to cash in on them,” he said with an air of ease after being asked how he felt that a man like Lesnar is on the other end of the cash-in.

“That being said, I’m not afraid of Brock Lesnar. I know that’s a lofty statement and most people should be afraid of him, but I’m not.”

It would seem The Architect is already building a scheme to take the champ out.

“If Brock finds himself in a position that is precarious that is advantageous in cashing in that briefcase, I will not be shy about doing that. It doesn’t matter who the champion is; he’s just a man, and he can be vulnerable as well.”

While Rollins bides his time – and continues to gibe his other former team member from the ring – he’s got plenty to keep himself busy outside of the squared circle.

“It’s a new venture for me. It’s something I’ve never done, and it should be interesting.”

Though Rollins will shy away from too much in-ring work (“I spend a lot of time getting beat up on the weekends and on Monday”), he’ll act as a consultant for the up-and-comers. The high-flying aerialist is ready to groom a whole new breed of superstar.

“I want these students to learn things the right way. I want them to understand what it is to work and have passion for what we do. That’s my biggest goal with this, to instill that sense of passion and hard work into a new generation.”

It was a feeling that jolted him as he grew up in the early ‘90s wrestling era, what ultimately set him on the path to where he is today.

“It was such a spectacle back then,” he said of the wrestling realm he grew up watching.

“It was the era of Hulkamania, and it was really ingrained in the pop culture. Being a young kid, seeing Hulk Hogan, who is essentially a real life comic book character… You mix that with the stories and the pageantry and everything they bring to the table with live events. It’s an entertainment extravaganza, and it works for all walks of life. As a kid, once I saw it, I was hooked.”

Rollins is certainly etching out a piece of that history for himself, bringing a strong character into the lives of many a wrestling fan week in, week out. His constant sneer, unbreakable swagger, and revamped outfit that’s akin to something Batman might have worn were it not so chilly in Gotham make him a dark force not to be trifled with. Chants of “You sold out!” fill the arena when he’s around; he’s clearly gotten under the fans’ skin – and he revels in it.

As he is a ‘90s-era wrestling fan, we thought it pertinent to ask him how his heel turn ranks when compared to the time Shawn Michaels kicked tag-team partner Marty Jannetty through a barbershop window during an on-air segment, one of the most shocking plot twists in WWE history to this day. He doesn’t hesitate in his answer.

“I’d put it up there. I mean, I’d go higher than the barbershop window. We caught ‘em by surprise, man; no one knew what was going on that night. You look at the barbershop segment and see Shawn had already distanced himself from Marty; the writing was on the wall a little bit. When I put that chair in Roman Reigns’ back, I think no one saw it coming.”

He pauses, then chuckles.

“Maybe you need to rewrite this scale. Maybe on a scale of, ‘zero to Seth Rollins bashing his Shield brother’s head in with a chair’ now is the new spectrum for heel turns.