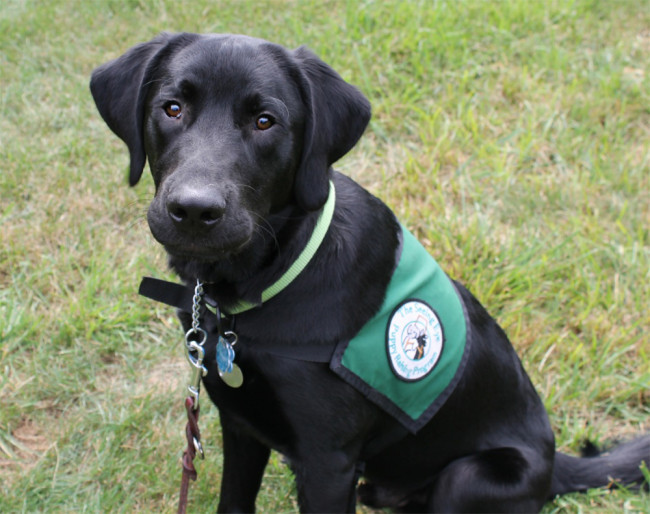 Earlier this year, a national poll was released that resulted in Scranton being named one of the most depressing cities in the nation. Comedian and Scranton native Kevin Lepka didn’t take too kindly to that poll. He was determined to turn Scranton’s frown upside down.

Last year, Wisecrackers Comedy Club closed its doors at the Clarion Hotel in Scranton and moved to Mohegan Sun at Pocono Downs in Wilkes-Barre. With the absence of a Scranton-based comedy club, Lepka, also known as “Fast Orange,” created Laugh Out Lepka’s Comedy and found a home at Ale Mary’s at the Bittenbender Building (126 Franklin Ave., Scranton). With its brick wall backdrop and cozy setting, the comedy room at Ale Mary’s gives the feel of a comedy club in New York City.

The third installment of Laugh Out Lepka’s Comedy monthly shows at Ale Mary’s is a benefit for The Seeing Eye, Inc., the oldest existing guide dog school in the world. 12 times a year, as many as 24 students at a time visit the Morristown, N.J., campus to discover the experience of traveling with a Seeing Eye dog. Their students – people who are blind or visually impaired – come from all over the United States and Canada to spend up to a month training with a new Seeing Eye dog.

They range in age from 16 to senior citizens, their home environments may be rural or urban, and they may be homemakers, volunteers, or judges, but they all have this in common: they are motivated by a sense of independence and armed with the knowledge that Seeing Eye dogs will provide an extra edge to attain success, however they may choose to define it.

The show will take place on Friday, Nov. 21 at 9 p.m., with seating at 8 p.m. The featured act will be Michael Dougherty, a graduate of The Seeing Eye’s program. Dougherty is a young new comic who has performed in Pennsylvania, New Jersey, and New York City. His fresh material and interesting point of view leaves audiences rolling with laughter and opens the sighted world’s eyes to what it is like to not only be a blind individual in today’s world, but also a guide dog handler. Hosting the show will be Northeast Firearms owner and comedian Mike Jones, and the headliner will be comedian/magician Tony Klusmeyer.

There will be raffles at the show, and half of the ticket sales and all of the raffles proceeds will be donated to the organization. Tickets are $20 and can be purchased here.

Helping raise funds for this great cause isn’t the only thing Lepka is excited about. On Friday, Nov. 28, Laugh Out Lepka’s Comedy is bringing one of comedy’s heavy hitters, Rich Vos, to its second venue at the Hilton Scranton & Conference Center (100 Adams Ave., Scranton). Best known from NBC’s hit reality show “Last Comic Standing,” Vos “has an uncanny ‘Everyman’ ability to likeably bond with anyone in the audience,” according to Back Stage magazine.

The excitement of a Vos show stems from his unique, no-holds-barred perspective on relationships, divorce, and parenthood. He pulls no punches when it comes to comedy. On many occasions, he will deliver some of the quickest crowd banter, leaving audiences not knowing what to expect next.

Vos is a “comic’s comic” who is quick, off-the-cuff, and appeals to all types of audiences, best represented by his extensive résumé of television and radio appearances. He has two Comedy Central half-hour specials and he appeared in two other Comedy Central specials. He was a regular guest on “Tough Crowd with Colin Quinn” and on “The Opie & Anthony Show” for the past 10 years. Vos has appeared on HBO, Showtime, Starz, “Jimmy Kimmel Live,” “The Rosie O’Donnell Show,” NBC’s “American Dreams,” and “The View.” He is also a regular on “The Joy Behar Show,” made three appearances at the Apollo Theater, four appearances on BET, and was the first white comic to perform on HBO’s “Def Comedy Jam.” He wrote for the 2005 Oscars and has appeared on and wrote for many celebrity roasts.

Miami native Sergio Marzitelli, who currently resides in Old Forge, will be the emcee and Lepka will be the featured act with a guest appearance by Delmer Von W. Tickets for the show will be $20 in advance and $30 at the door; they can be purchased here.

With these two major shows lined up, Laugh Out Lepka’s Comedy is working to achieve Lepka’s goal of turning Scranton into a more upbeat and cheerful city. Check out his website for more details on upcoming shows.