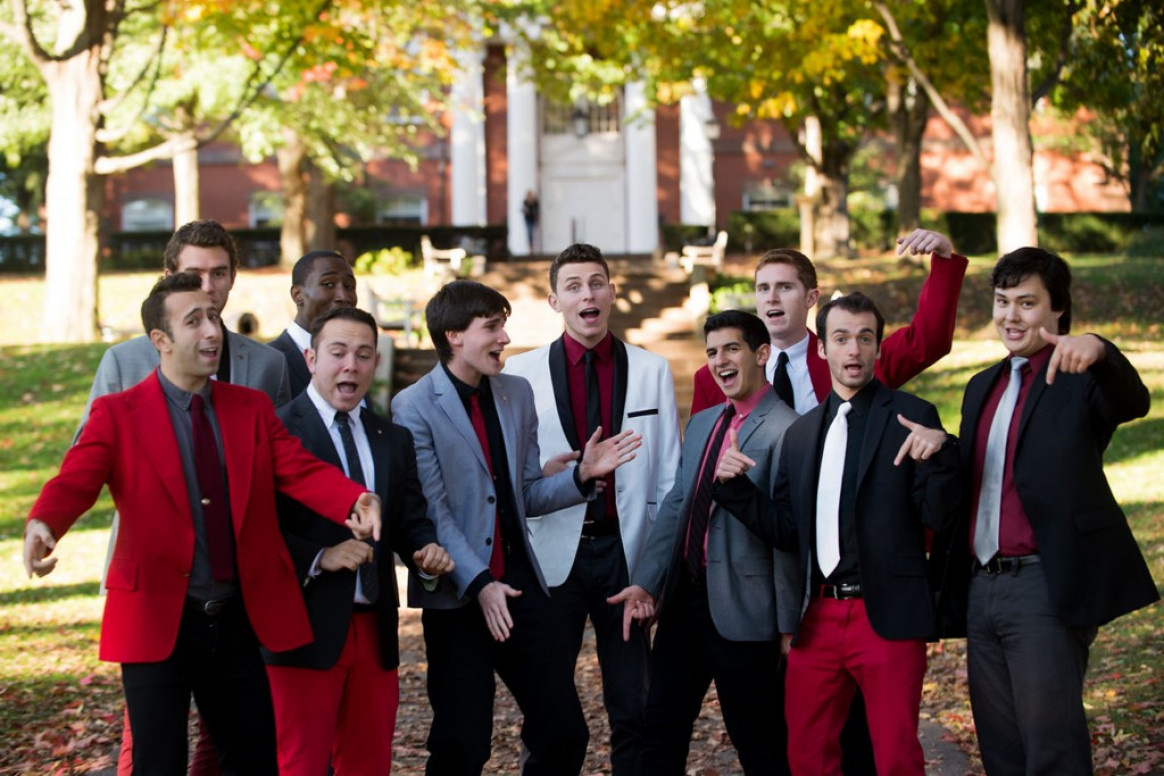 The human voice is a powerful thing, our main vehicle of communication that evokes every emotion, from anger to pure joy. Put a group of voices together, spin the sound so it forms songs that encompass both the musical and instrumental aspects, and you’ve got a feeling unlike any other – a cappella will do that to a listener, and particularly if it’s coming from Tufts University’s Beelzebubs.

The group gave a voice to the popular Dalton Academy Warblers on the hit Fox show “Glee” and rose to fame on NBC’s vocal competition show “The Sing-Off.” The Bubs have been around since 1963, bringing forth generation after generation of musical talent that provides a stylistically diverse repertoire, covering everything from rock to hip-hop.

The all-male chorus recently released the EP “Four Seconds,” which features covers of Adele’s “Turning Tables,” fun.’s “We Are Young,” and “Refuge/Waiting on the World to Change,” a medley of the John Legend and John Mayer songs.

The Bubs are comprised of a mere handful of guys that convey a vocal powerhouse upon any audience set before them; Ethan Wise, Jason Williams, Tom Lavin, Adam Gotbaum, Carl Haber, Jordan Abosch, Justin Sullivan, Tim Balton, David Franklin, and Johnny Fairfield-Sonn make up the group. We caught up with Wise, the Beelzebub’s music director, to find out what being a part of this time-honored tradition at Tufts University entails before their Christmas concert in the Lemmond Theater at Misericordia University (301 Lake St., Dallas) with the university’s very own a capella group, Beyond Harmony, on Sunday, Nov. 23 at 7:30 p.m.

NEPA SCENE: What does your role as musical director involve?

ETHAN WISE: A lot of things. First of all, being responsible for making sure the group has arrangements to sing. A lot of the time I’ll write them myself, but we actually have a great wealth of really talented musical arrangers in the group, which is not always the case for many musical acts. We also have a great body of alumni, many very talented and very generous with their talents, so from time to time when we need something specific, we’ll go to a particular alumni who we know has strength in a certain area. I also manage rehearsals and run the warm-ups. I wear a lot of different hats, but so does everyone in the group.

NS: What is the process like, turning an everyday song into its a capella version? How do you choose the songs?

EW: Ultimately, we do listening sessions where everybody has a certain amount of time to show off music. Everyone shows up having prepared the best thing to show the group: the verse, chorus, maybe the ending. Then we go around in a circle and everyone votes for what they like.

As far as how it gets turned into a capalla… that’s a really good question, because it’s hard to nail down. Everybody has his own style of going about it, and it also totally depends on the piece of music. Some songs are a lot harder than others, whether it’s from having to reconfigure a key so that it’s in a place where it suits our voices, or sometimes songs just have more intricate parts or complicated chords. For example, Tom is a great arranger with a lot of musical theory training, and he really likes to write out all the chords on paper first so he can see it. I do things a bit more by ear; I listen to the song and pick out, “Oh, I really thought the trumpet there would be cool, so I’m going to try to capture that with someone’s voice.”

NS: Are there any songs you haven’t tackled yet that you really want to?

EW: There are lots of songs we really want to do. We have this conversation literally all day, every day. We live in a house together, and it’s probably three, four times a day that someone says, “Come listen to this.”

NS: In a world of technology that aids many musicians in accomplishing their sound, how does the simplicity of what the Beelzebubs do hold its own? How do you stay relevant?

EW: Part of it is that if you think about what our voice is… it is perhaps one of the instruments that I can think of that is the most capable of the most variation. Not that you can’t have variation with other instruments, like, say, the trumpet where you can cover the hole the sound comes out of and many other things. But, the voice has such a capacity for variation of tone quality and pitch and all kinds of crazy things – the fact that we can add intense bravado to our sound. You can tailor vocal sounds not just as singing, but as, “What can I do with this instrument in my body?”

How we stay relevant is the fact that there are always ways to reinterpret a piece of music, and there’s something about vocal music that appeals to people in the sense that anyone can do it. People say, “Oh, I can’t sing. I don’t have a good voice,” but at the end of the day, everybody has this instrument in their body. There’s something very tangible about it, even for people who don’t participate themselves.

NS: To you, what does it mean to be a Beelzebub?

Even me, graduating in May, I still don’t know if I’ll ever feel like I know exactly what it is, because it’s so many things in so many different contexts. First and foremost, I’ve gotten my best friends in college. I look at the guys in the alumni association who sang in the ‘70s together and who are still friends to this day. We talk about being a brotherhood and having all these qualities of family, and I think that’s really it, in a nutshell.