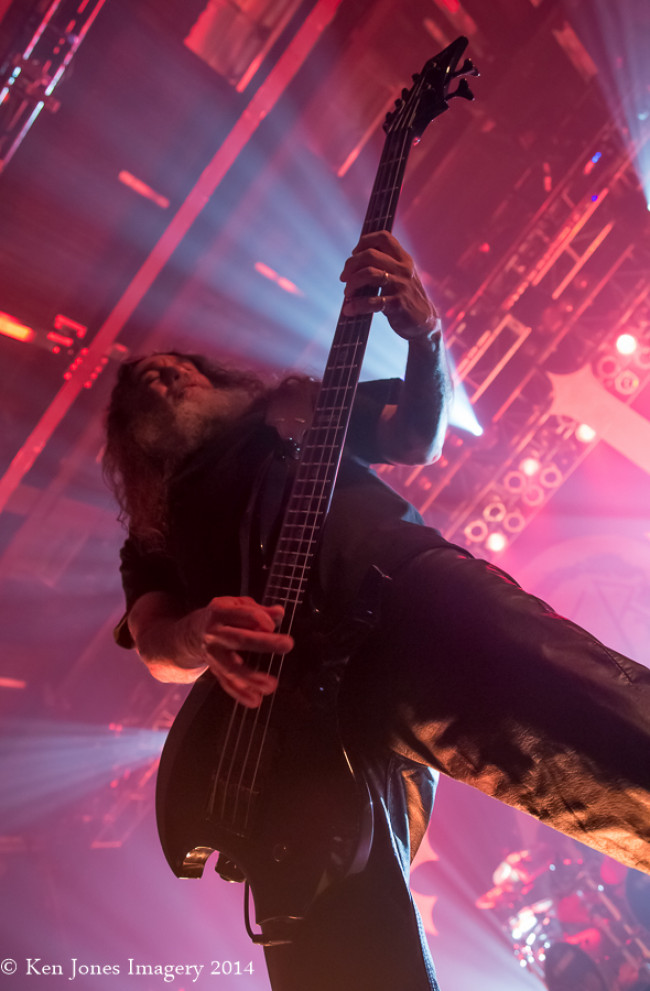 Several inches of snow and somewhat dicey road conditions in the Lehigh Valley couldn’t stop the metal faithful from amassing a near-capacity army at the Sands Bethlehem Event Center on Thanksgiving Eve, Nov. 26. The triple attack of Exodus, Suicidal Tendencies, and Slayer made for a trampled-under-flying-bodies good time, and the crowd was anything but apathetic right from the very first riff. 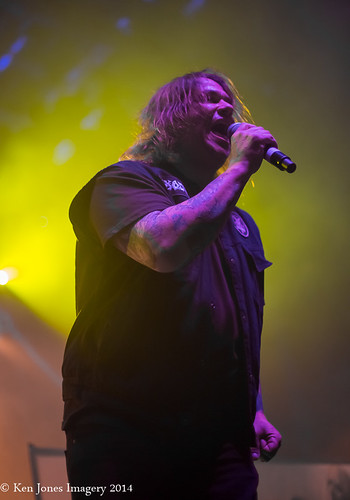 Opening was Exodus, one of thrash’s original purveyors, who recently reunited with longtime vocalist Steve “Zetro” Souza. Touring in support of the newly released “Blood In, Blood Out” album, the Exodus set consisted of only six songs, which one can only surmise stemmed from the fact that guitarist Gary Holt also plays in Slayer, holding down the second guitar slot in that band since Jeff Hanneman’s leave of absence, and, ultimately, 2013 passing.

Exodus bore teeth throughout their light set, beginning with “Black 13” from the new album, the track reminiscent of the band’s thick-skinned, latter-day material on their “Atrocity Exhibition” albums recorded with singer Rob Dukes. The song gradually built in intensity, with over a minute of militarized “forward march” instrumentation, leading to the purge of metronome-busting thrash delight. As if on cue, the crowd answered with a mosh pit breaking out in the center of the venue’s floor.

Souza, who’s not big on stage presence but still can evoke a response, stalked the stage with a calm but rabble-rousing persona. Holt was clearly locked into his performance with the band he’s led as the sole member to play on all of Exodus’s studio material since their 1985 debut, “Bonded by Blood.” Holt’s head rarely stopped banging – just enough to mouth backing vocals or rip a guitar solo. His t-shirt, emblazoned with the slogan “Kill the Kardashians,” was a hit with fans, as several in the crowd could be overheard commenting on the eye-catching attire. 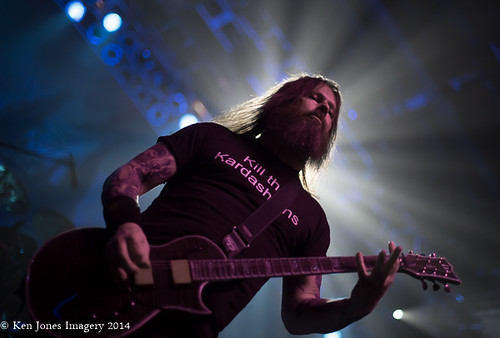 Classics like 1989’s “The Toxic Waltz,” which Souza prefaced by asking the crowd, “Do you know how to dance?” was a volatile thrash delight, as was closer “Strike of the Beast” from ‘85’s debut – the latter tune was prefaced with the warning that “Suicidal was about to come out and kick your ass.” Losing nothing to time, Exodus cemented its status as one of the should’ve-been Big 4 of thrash.

While Souza’s return to Exodus had somewhat of a reunion-like anticipation, Suicidal Tendencies felt like the complete opposite. Vocalist Mike Muir, long the sole original member, has replaced even more musicians in his band as of late – most recently bassist Michael Morgan for Tim Williams, who passed away just this year. Suicidal was true to its hammer-fisted, hardcore punk roots through an eight-song set, yet just seemed a bit more removed from its “glory days” than Exodus. 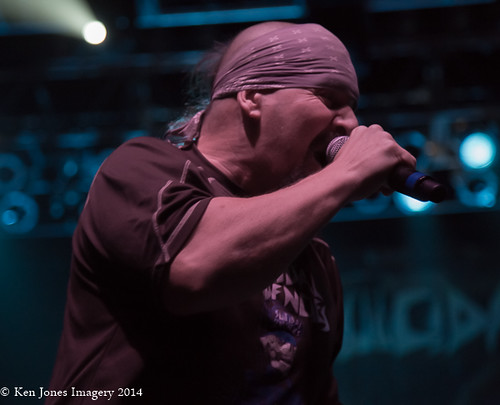 Literally sprinting onto the stage, Muir easily belied his 51 years, looking fit and never lacking for one of his fiery trademark “motivational” song intros. The band slammed into “You Can’t Bring Me Down” from 1990’s “Lights…Camera…Revolution.” The more metallic element of longtime Suicidal guitarist Rocky George, who played on the band’s heaviest work, was missed on said material – although the six-string pairing of Dean Pleasants (guitarist since ’97) and newer blood Nico Santora (a few days removed from his 26th birthday) were quite a capable team.

Tracks like 1987’s “War Inside My Head” were raucous mosh-inducers, as was “Subliminal,” from Suicidal’s 1983 eponymous debut, with Muir engaging in a stage move that can only be described as half seizure, half hardcore psych-out, always engaging the crowd as a consummate frontman. A sing-a-long rendition of “I Saw Your Mommy,” a veritable skate-punk anthem from the first album, was a crowd favorite – the crass chorus of “I saw your mommy and your mommy’s dead” providing a perfect segue into the debauchery that would be Slayer’s set. 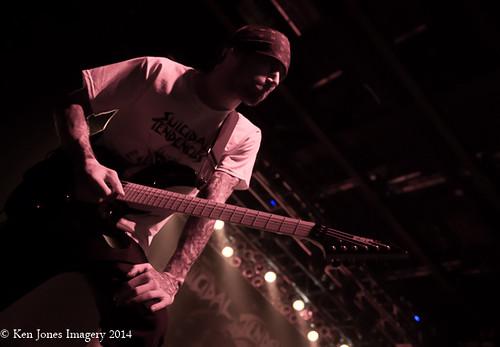 After leading the crowd in a fist-pumping chant of “S T” with guitars chugging along to the warcry, Muir took the band into “Pledge Your Allegiance” from 1988’s “How Will I Laugh Tomorrow When I Can’t Even Smile Today.” The chant continued even after the song was finished, as the band came to the front of the stage to further incite the mob – tossing picks and drumsticks and Muir slapping hands with the crowd in appreciation. 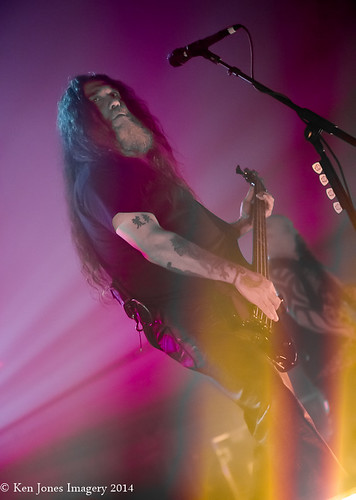 After lifting a giant white curtain, Slayer appeared as evil as they ever have during their nearly 35 years of metal mayhem, smoke eerily enveloping the pinkish-red stage lights, with giant inverted crosses flying above. As the band tore into opener “World Painted Blood” from the 2009 record of the same name, the audience had pushed itself to the limits of the general admission seating – not an open space on the floor was to be found. You know it’s going to be one heck of a night when your jaw rattles involuntarily from the blowback of the kick drum being miked so loudly.

“Postmortem” from 1986’s thrash pantheon “Reign in Blood” followed, one of half a dozen songs from what many consider the pinnacle of the band’s career. Little between-song banter was heard, as the band, like a well-oiled machine, quickly ripped from one song to another with carefully polished attitude and aggression.

Early in the set, vocalist Tom Araya stood silent as he took in the screaming masses. After several minutes, a visibly pleased Araya finally spoke, saying, “Everytime we play, I can’t believe all the smiling faces. That’s what it’s all about, right? A good time?” The band then sliced to the heart of “Die by the Sword” from its 1983 debut, “Show No Mercy.” 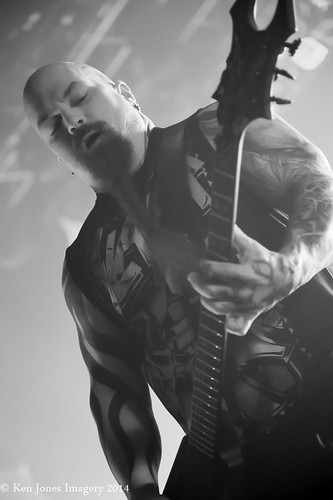 Venomous, high-velocity tracks like “War Ensemble” and “Chemical Warfare” were the perfect soundtrack to a night where no audience member was unscathed. Pure and simple, if you were on the floor, you were bruised in some manner. The level of moshing and crowd surfing brought to mind classic ‘80s-era thrash shows, where the level of abandon was off the charts. Security weaved throughout the crowd trying to weed out the most violent of head-charging, but there’s no way they could have controlled the wave of slamming bodies completely.

Some of the set’s best moments were when the band invoked 1985’s “Hell Awaits” album. After a blinding rendition of the title track, Araya made reference to the album’s 30th anniversary that was impending before prefacing that record’s “At Dawn They Sleep” with a sisnisterly spoken, “This is for all you blood-sucking creatures of the night.” Guitarist Kerry King, looking as metal as ever with braided beard and the thickest chains you’ve ever seen dangling from his hip, laced his solos with piercing animation.

Late in the set, Araya further proved his legendary “evil incarnate” aura when he turned in a Jim Morrison-esque spoken word intro to “Dead Skin Mask,” calmly and poetically mouthing the lyrics, “Dance with the dead in my dreams, listen to their hallowed screams.” The song took on a life of its own, with extended riffs and double-bass thunder from Paul Bostaph, who in 2013 took back the reigns (Bostaph played with the band from 1992-2001) from departing original drummer Dave Lombardo. “Raining Blood” drew a huge response – the song’s hellish buildup of guitar feedback and pulsating tom fills from Bostaph made for a heightened sense of excitement. 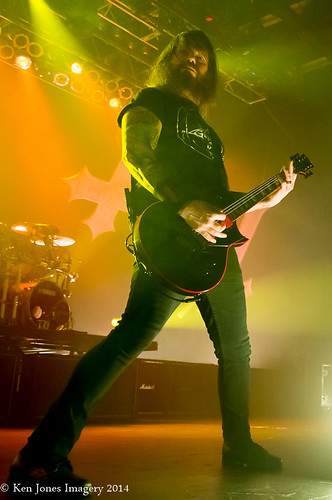 Closer “Angel of Death” was not to be missed – Araya is still able to pull off the song’s blood-curdling scream that leads into the main vocals. A giant banner was raised behind the band in tribute to Jeff Hanneman in a mock Heineken beer logo with “Hanneman” in place of “Heineken,” and the words “angel of death” and “still reigning” at the top and bottom of the logo – a graphic similar to what Hanneman once used on his own guitars.

After the song, Araya, honestly pleased with the audience’s response to the band that night, closed with, “Thank you for sharing tour time with us. Until we see each other again, goodnight.”

Prior to this run of fall dates, Slayer was in the midst of recording a new album. Judging by the professional caliber of their dizzying display of live metal mastery, the new material should be fed by the energy the band can take away from these shows. While other members of thrash’s Big 4 may be, at times, metaphorically bailing water stylistically, Slayer is more than content to stick to a winning formula.

No surprise, because they do it better than almost anyone.