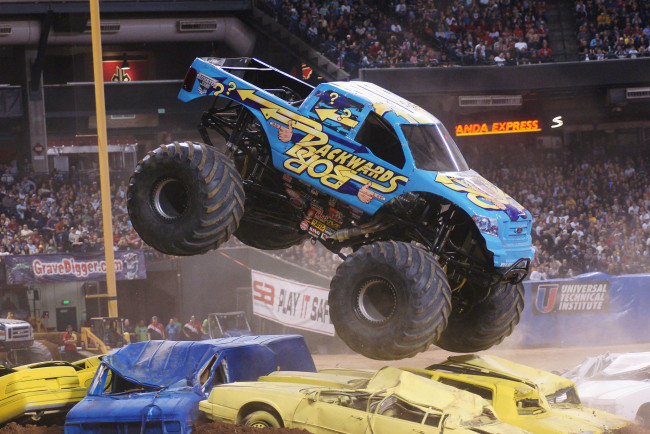 Watching an enormous truck fly through the air, crushing cars and spinning about on huge wheels, is astonishing in itself – but what if it were doing it all backwards?

OK, so maybe the actual act of driving backwards is untrue, but the Backwards Bob truck definitely gives off the impression that driver Bryan Wright is trekking the course while going the wrong way. It takes the mind a little while to get used to it, but rest assured that Wright is mounted in the correct driving position.

Backwards Bob, a unique Monster Jam truck that will make an appearance at Mohegan Sun Arena at Casey Plaza in Wilkes-Barre this weekend, is mounted in such a way that the driver’s seat is actually staring down the bed of the truck instead of the hood. It debuted in 2008 at the Monster Jam World Finals and proved to be a crowd favorite.

“No, no, I’m not driving backwards,” Wright admitted with a chuckle in a recent phone interview. “Actually, I have the biggest forward site vision of any truck because I am looking right out of the bed.”

Wright, who has had a love of motorsports his whole life, said adjusting to driving such a strange vehicle was a snap, and he’s thrilled to be able to confuse the masses a bit with the odd setup of the truck.

Originally from Grandy, North Carolina, he started competing for Monster Jam in 2011. He grew up in a town that held mud bogs, and during his days spent watching those, he decided he wanted to get into a sport just like it.

When his son turned 5, Wright took him to quad races.

“One thing led to another, and I got the fever on that,” Wright said.

He bought himself a quad and it turned into a family affair. His wife, who hails from Illinois, grew up around dirt track racing, so she was also familiar with motorsports. His son ended up winning several championships. Wright raced for five years, winning the 2005 and 2006 ATVA Championships.

His career with Monster Jam began as a crew member for Grave Digger driver Chad Tingler. He loved it, but he wanted something more.

“I was the one turning the wrenches and I wanted to sit in the seat.”

He was eventually introduced to Monster Jam owner/driver Steve Sims, who moved him to a crew member for Stone Crusher and Monster Magic. Sims asked Wright to drive Monster Magic for the 2012 season and Wright’s driver’s seat was solidified.

He loved the sport from the start, but recalls being pretty nervous in the beginning – which lead to a funny encounter with his boss.

“We were in a stadium in Atlanta, Georgia, and that is like one of the big shows of the Monster Jam tour,” he recalled. “We’re on the floor doing a pit party and I’m just sweating away; it was wracking my nerves. So, I was timid with the truck a little bit. Afterwards, Steve said to me, ‘You’re going to have to tear stuff up and learn how to drive a little more aggressively,’ and I thought, ‘Wow, I’ve never heard that for a job before.’ It was an unexpected statement out of my boss’ mouth. I mean, I would never tell anybody that in my company.”

And rightfully so, as when he’s not riding for Monster Jam, Wright’s trade is land development; he owns a grading and clearing business, a job where careful driving is a must.

Wright’s had some great moments driving for Monster Jam, but his favorite so far is his participation in Monster on the Beach for Mother’s Day last year in Virginia Beach. He didn’t even have a seat for that particular show, but when a driver fell ill, Wright ended up taking his spot – and snagging the title of King of the Beach.

“It was a long weekend, but I ran hard, I ran smart, I kept my points all through the weekend… and I was King of the Beach. I was not expecting to do that, to get to strut my stuff in front of my hometown.”