TURN TO CHANNEL 3: ‘WWF Superstars’ arcade game still shines brightly, but the best was yet to come 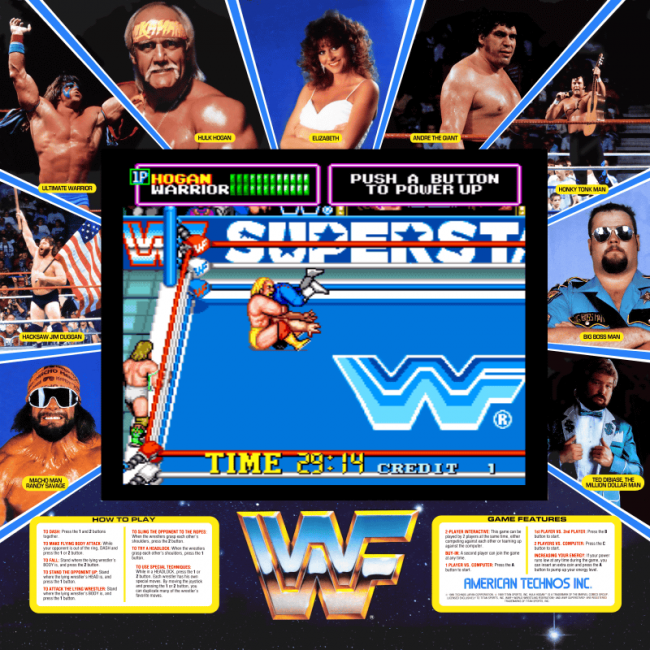 March is quickly passing us by, isn’t it? Soon we will be enjoying Easter, but here on Turn to Channel 3, I hope you also take the time to enjoy those gaming experiences that have shaped your life, even if just in a small way. Today, we finish up our look at wrestling arcade games that we started last week and, yet again, this is another topic that comes straight from my own childhood.

To those of you who may have grown up around the DeMarco family, it was no secret who the athlete of the family was, and no, it wasn’t me. My brother Len played football, basketball, and baseball, the last of which he would practice at the batting cages just upstairs at Battaglia’s Sporting Goods store in downtown Scranton. You’d think someone like me, who was more into studying geography, reading books, and dreaming of being an astronaut (that never panned out) wouldn’t want to be anywhere near a batting cage, but fortunately for me, there was a small arcade upstairs by the cages (I’d die if it was still there), and there stood the topic of today’s Turn to Channel 3 review – “WWF Superstars.”

While “WWF Wrestlefest,” the follow-up to this and subject matter of the previous review I did, was this huge arcade cabinet, “WWF Superstars” was a bit smaller in comparison, but it didn’t change the fact that it got me through the process of waiting for my brother to stop trying to hit a baseball to absolutely no one.

So what was “WWF Superstars” like? Is it as good as other wrestling arcade games? Well, let’s step back into the ring one more time, brother! (That was you, Len, and I guess Hulk Hogan, too.)

While there is a variation of the classic Hulk Hogan entrance theme as you select your team, this is another WWF arcade game that doesn’t use original wrestler tunes, which really baffles me. Instead, you’re treated to some decent music as you play through the game, although most of it is pretty standard.

As far as sound effects go, this is where the game excels a little bit more. The sound of the action – all the bodyslams, suplexes, and clotheslines – sound very good, along with cheers and boos from the crowd. Once again, a WWF arcade game treats us with some so-cheesy-it’s-good renditions of popular superstar voices, featuring The Million Dollar Man (“I’ll put you to sleep with my Million Dollar Dream!”) and the legendary Andre the Giant (“No one can beat Mega Bucks!”), which still gives me a chuckle after all these years. You even get a truly forced version of Miss Elizabeth congratulating your team on their victory.

While the character sprites were a lot smaller than those found in “WWF Wrestlefest,” they were still pretty well-made and pretty accurate in depicting the superstars of that era. The ring looked great, but obviously it was the cut scenes that really stole the show, with those detailed shots of your characters, as well as those of The Mega Bucks and Miss Elizabeth. There was even some great work done on some of the arenas you were in, and by that I mean a shot of the outside of the arena.

While “WWF Superstars” is fun to play, there are a few things that really cut down on the overall entertainment value of the game. First off, you don’t have many characters to choose from, which forces you to face some characters more than once on your quest to become Tag Team Champions.

The characters themselves, while not totally stifled in their arsenal of moves, aren’t anywhere near as varied as future wrestling games, while still diverse enough to give the character you choose their own individual personality.

Lastly, defeating The Mega Bucks team is extremely difficult at times, especially when Andre is in there, because unless you have The Ultimate Warrior or Hulk Hogan, who can occasionally get the big guy off his feet with a slam, you’re going to have a difficult time keeping him on the mat for a pin. I can understand the realistic feel of that, but at the same time, it’s kind of silly that you have to hope the AI takes mercy on you and tags The Million Dollar Man back in so you have a fighting chance in there.

While “WWF Superstars” has its share of flaws and is obviously not as good as “WWF Wrestlefest,” this was one of the first wrestling arcade games that gave us a glimpse of what was to come, and it also made us wonder why no console company could find a way to bring an experience like this into our homes. Had any company – Nintendo, Sega, Atari, even NEC with the TurboGrafx-16 – brought this game or one of this quality to their home console, who knows how the video game market would have looked at that time?

Taking the game at face value, it delivers on most of its promises, despite being less than stellar in comparison to “WWF Wrestlefest” and later wrestling games to come. Regardless of the difficulty, there are few things more fun for a fan of the WWF in the late 1980s than tangling with The Mega Bucks in hopes of coming out victorious!

I hope you enjoyed this review of an arcade wrestling classic. Turn to Channel 3 will conclude the month of March next time with a look at a Sega Genesis beat em’ up that has less to do with brawling on the streets of some fictitious city and more about kicking gnomes in the butt for potions.

Until then, it’s never too late to ask the Easter Bunny for some chocolate, and video games, of course! Game on!