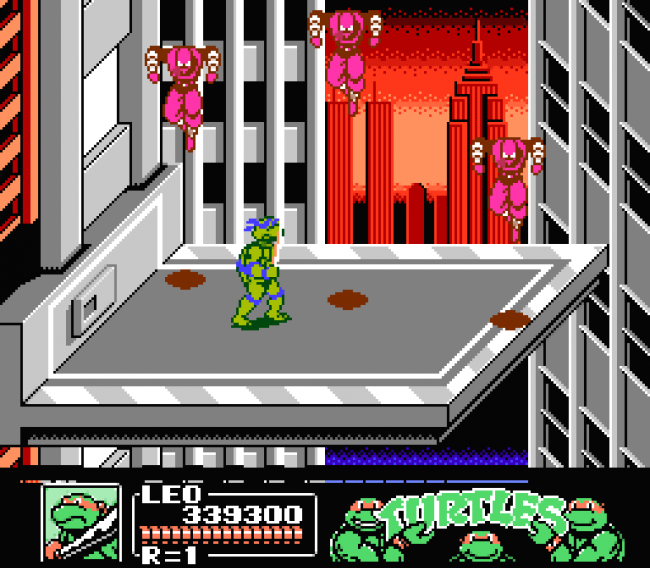 It never ceases to amaze me that there are still gamers out there unaware of the fact that many of their favorite series did indeed have a third or possibly even a fourth installment. A great case in point is today’s topic here on the last edition of Turn to Channel 3 for the month of August – “Teenage Mutant Ninja Turtles III: The Manhattan Project” on the NES.

Oh, sure, everyone remembers the fun yet dreadful original, and the solid attempt to convert the arcade TMNT game onto the NES for the sequel, but not many gamers know that this game ever existed. (I suppose they didn’t see the Roman numeral “IV” at the end of the SNES “Turtles in Time” game, but I digress.) Here’s one man’s opinion on why you shouldn’t dismiss this title as just a transitional piece to that aforementioned TMNT classic on the SNES. Cowabunga, dudes!

In every way imaginable, this Turtles adventure on the NES is far too often overlooked by fans of the games, whether that be on the NES or otherwise, and it’s a shame just on soundtrack alone, because it’s quite good. What a lot of people fail to realize is Konami was either directly or indirectly (under the guise of the company Ultra) responsible for every well-known retro “TMNT” title and, for the most part, like Capcom, Konami isn’t known for making terrible games; back in the day, they seemingly could do no wrong, so seriously, enjoy this soundtrack.

Go, grab something cold to drink, maybe a pizza, and just enjoy the music in this game, which ranks right up there with the “Turtles in Time” soundtrack, as well as the music in the original arcade game. It’s fun, exciting, and definitely carries that TMNT vibe with it that fits like a glove into each level. The sound effects might not be a big deal, but they add to the action without annoying you or taking away from that awesome soundtrack!

No, you can’t put the graphics in this game up against “Turtles in Time” and the original arcade game, but I would certainly put this ahead of the bland graphics of the first NES installment, as well as the NES adaptation of the arcade game, so that’s something impressive, I’d say. You can’t really take developers to task on the graphics as far as the Turtles themselves go, because in all games, other than the color of their bandanas and their weapon of choice, there wasn’t anything done to separate the characters.

What I appreciate the most about the graphics are the level designs, which are way more diverse than other TMNT games on the NES, as well as those cool cut scenes in between levels, especially at the start of the game. Sure, most enemies don’t have any differences save color and weapon choice, but the bosses are quite the unique bunch, and I’ve always marveled at how the games have put enemies from both the cartoon shows and the comics in so that those who are only in the know about one of them (I didn’t really read the comics) got to experience rivals of our heroes they normally wouldn’t have.

“TMNT III” is a blast to play, and one of the main reasons is the easy to understand controls, combined with the ability to utilize them in ways for some effective attack strategies. I’ve always been so frustrated with games like this, where the enemy AI finds the cheapest ways to take advantage of your shortcomings, and yet in this game, I didn’t really run into that too much. I thoroughly enjoyed flipping Foot Soldiers into the air and watching them crash into one another (though it’s not seemingly tossing them through your television like in “Turtles in Time”), as well as the trusty jumping kick. In truth, while it may seem like the attack scheme hasn’t changed much since the second NES Turtles game, it definitely seems far more crisp and effective in this game than in that one.

I think one of the main problems that causes gamers to overlook this title is just how great and beloved “TMNT IV: Turtles in Time” on the SNES is, but I would like to really emphasize the fact that this is probably, if not definitely, the best of the three entries on the NES, for if no other reason than the fact that the whole concept behind the game is fresh and done well. Whereas the original NES game falls short on so many levels, and the second game is tied to the arcade port, “TMNT III” is its own mutated animal. It plays like many had hoped a TMNT NES game would play. It is becoming harder to find as more and more people realize that fact, so if you come across a copy, I encourage you to pick it up. You won’t regret it.

Well, we are now heading into September, and with that, the fall. Can you imagine it will be one whole year of me writing about video games here at NEPA Scene in just a few months? Crazy, right?

Anyway, next month, we will be focusing strictly on the Nintendo 64 in what I like to call “A 64 September” here on Turn to Channel 3, so until then, take care, and always remember to game on!