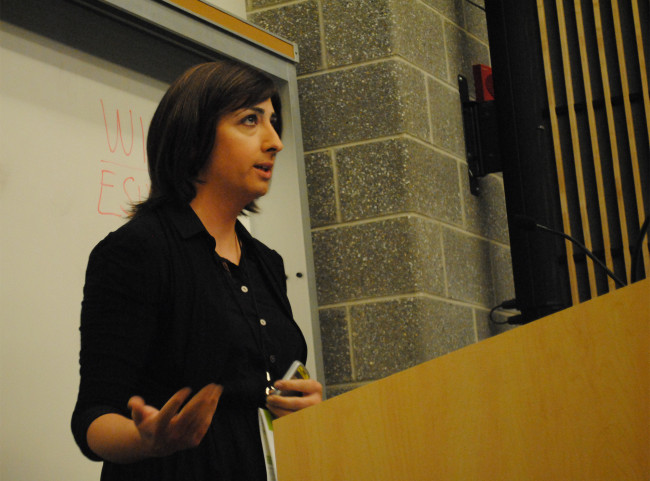 “Are you nervous?” my friend asks. I just smile and tilt my head to one side.

Sometime later, I go over the notes on my iPad and sense my heart is beating harder than usual. I close my eyes, regulate my breathing, and it all goes away. Suddenly, my name is called. Cool as a cucumber, I walk up to the podium and begin my presentation for NEPA BlogCon 2015 on Saturday, Sept. 12. What little anxiety I have is gone within minutes. I’ve only rehearsed for an hour or two, but the whole thing is so rote by now that I’m practically on autopilot as I speak. 20 minutes later, I can hardly believe it’s over.

Was it a good presentation? Was I interesting? It must have been… At one point, I looked up and saw that all eyes were on me, and when I stopped speaking, you could have heard a pin drop. Honestly, all I can recall is the audience applauding as I wrapped things up. As I returned to my seat, the realization of what I’d just done crashed over me. I stood at the front of a room filled with 250+ people and announced to them that I am transgender. A year ago, I could barely utter the word “transgender” in public and, yet, here I am, telling it to the world in a fancy dress and makeup.

And they didn’t stone me. They didn’t walk out. They didn’t shout at me or groan their disapproval. In fact, several people came up to me afterwards just to thank me for sharing my story. People weren’t merely interested in what I had to say; I had actually reached some of them. It blew me away, and I admit, I got a bit emotional after.

That’s why I have to take the time to thank the women who run NEPA BlogCon – Karla Porter, Mandy Boyle, and Michelle Hryvnak – for creating a space where women, all types of women, have the opportunity to share their stories and their secrets to success. Don’t get me wrong – NEPA BlogCon isn’t explicitly for women. However, I was happy to see so many of them on stage and in the audience. Year over year, it just grows and grows. I’m excited about this because the tech industry is woefully devoid of women. Often, our voices are pushed aside and drowned out. We hear that “girls just aren’t interested in science,” that they don’t have the same aptitude as men, and are subjected to some of the grossest, harshest elements of sexism and misogyny.

To regular readers, my column this week may seem light on the plights of the LGBT community, but I assure you, this is an issue that many face in the LGBT community. This exclusion and squelching of our voices is another side effect of the patriarchal society we live in – one that tends to overvalue the roles of older white men. The tragedy is that everyone isn’t for having the diversity necessary to really make a difference in the world. That’s why I’m glad BlogCon exists and that I was given the chance to reach out and touch people’s lives. I wasn’t just representing women on that stage; I was representing pansexual, transgender women. I just hope I did it well.

It’s hard for me to get worked up and anxious about things like stage fright. To me, true nervousness, true anxiety comes from day to day stuff, like walking through a grocery store and the feeling that everyone is staring at you, judging you. Or when you get up to the checkout register and the clerk is giving you a sideways glare. You can’t help but wonder, “What are they staring at? What are they seeing?” (Which is ironic, considering that being on stage, where everyone is, literally, staring at me, I feel comfortable. But at least on stage, I know why they’re staring.)

However, none of that compares to the anxiety you feel the day you look into your mother’s eyes and tell her that the little boy she raised isn’t actually a boy at all, challenging her ideas about her faith and religion, pushing aside every lesson she was taught, except for the most important one: to love, unconditionally, in the only way a mother can love her children. That was one of the most difficult moments of my life. And so it goes for anyone society deems “undesirable” or those who challenge the public’s idea of what a person should be. In fact, I don’t doubt that a lot of people, far too many, have it much, much worse than I. I don’t know how they do it. All I know is, being on stage is a cakewalk compared to dealing with the hidden normality of plain ol’ bigotry and hatred.

To be completely honest, I’ve been preparing my whole life for moments like this one. I love performing. I love being on stage. I wouldn’t call it narcissism; it’s just something I’ve always loved doing – the rush of adrenaline, the charge of being in the spotlight. It’s intense, and it reminds me that I’m alive and in the moment. I’m definitely one of those rare individuals who gets jazzed up before going on stage, who feeds off the positive vibes of the audience.

It helps to have a good story or a product to sell, though. With things like this, you’re usually selling something. If you have a good product, it’ll practically sell itself. In this case, I’m telling the audience a story about blogging, having an active lifestyle, and using social networking in a positive way. The crux of my speech was how these three things saved my life at a time when gender dysphoria was pushing me to a drastic edge. But that’s not the product I was selling. The product I was selling was me, and forgive me for saying so, but I believe it’s a good product. It practically sells itself. But then, being an honest, open person who is living your truth will always be an easy sell. People crave authenticity, and when they see it in others, they flock to it.

In closing, I leave you with the words of Ashley Ambirge from The Middle Finger Project in her blog post about her keynote speech at NEPA BlogCon, “Plan on Being Nervous:”

“Maybe the most brilliant way to be nervous?

Is to be nervous, brilliantly.”